Get Your Groove On: Tuition-free dance and fitness classes are available for teens, adults and seniors throughout the New Orleans area. 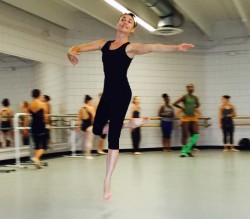 The NORDC/NOBA Center for Dance — a cultural community partnership between the New Orleans Recreation Development Commission and the New Orleans Ballet Association — is making sure that free, high-quality dance and fitness instruction is available to everyone in the Big Easy! The tuition-free classes and workshops are open to teens and adults ages 14 and older at six NORDC Centers throughout the New Orleans area. Classes on offer include tai chi, yoga, modern dance, ballet, Haitian folkloric dance and more by local and visiting master artists. All classes encourage coordination, strength, control, flexibility and creativity. And the best news: You don’t even have to be an experienced dancer to participate!

And seniors ages 55 and older, listen up! The Center for Dance’s award-winning Senior Dance Fitness Program is open year-round, and includes stretching and cardio sessions — along with healthy eating and lifestyle education. Program participants also receive performance opportunities, access to special master workshops, social events and $5 tickets to select NOBA Main Stage presentations. The schedule is subject to change, so be sure to check the Website. nobadance.com
Kids Unite! A new wearable-for-good band gets kids active — all while helping malnourished children around the world.

Statistics show that one in four American kids are not active enough, while one in four kids globally are malnourished, according to UNICEF. And, according to the Robert Wood Johnson Foundation’s 2011 report, F is for Fat, Louisiana is the fifth most overweight state in the country and has the fourth-highest rate of childhood obesity. Now there is a new wearable-for-good band, dubbed the UNICEF Kid Power Band, that addresses both childhood obesity and world hunger.

The way it works is simple: Kids wear the fitness band, which they can use with the free Kid Power companion app; they go on missions through the app, learning about new cultures and earning points for completing activities and challenges; and then the points unlock therapeutic food packets that UNICEF then delivers to severely malnourished children around the world. So essentially, the more that kids are active, the more healthy they become, the more points they earn and the more lives they save. Guests can also follow along on the UNICEF Kid Power Website to track the impact made my kids all over the United States.

The UNICEF Kid Power Bands retail for $40 and are available in blue or orange, or in two special Star Wars: Force for Change editions in black and white. They are available exclusively at target.com and will also be available in local Target stores in early 2016. unicefkidpower.org
Maria’s Pick

Here in New Orleans, our thoughts often drift to food. But no one can really blame us: We have some of the best restaurants in the United States and a history of food culture that can easily be described as otherworldly. Also of utmost importance, especially for us here at New Orleans Living, is maintaining a healthy balance. That means enjoying all of the food that NOLA has to offer, but being sensible in the process. Enter local author and culinary historian Poppy Tooker’s new book, Tujague’s Cookbook: Creole Recipes and Lore in the New Orleans Grand Tradition ($35, Pelican Press), which was recently released with rave reviews.

New Orleans Living publisher Maria Muro also gives the book a big thumbs up. “I love that there are a number of traditional dishes that have a healthy slant to them,” she says. “Examples include the vegetable beef soup and the boiled beef brisket with horseradish sauce; even the Creole cream cheese — the original indigenous cheese of South Louisiana — has healthy benefits similar to yogurt.”

Of course, decadent recipes, such as classic bread pudding with holiday cranberry sauce, are also at your fingertips. The book features nearly 100 food and drink recipes (each with a story behind it) from Tujague’s — the second oldest restaurant in New Orleans — with dishes from the 1850s to today. It also includes everything from eerie ghost stories to a look at the menus that created the international tradition of brunch. Those who are familiar with the restaurant will also enjoy perusing pages of memorabilia from the restaurant’s archives, alongside stunning modern photography by Sam Hanna and Louis Sahuc. Available at independent book stores, Barnes & Noble and Amazon.