For more than 25 years, Dr. Raymond DeCorte has been serving the patients of East Jefferson General Hospital in a variety of capacities. After graduating from Louisiana State University Medical Center, Dr. DeCorte completed his residency in general surgery at the University of South Alabama Medical Center in Mobile, Alabama. 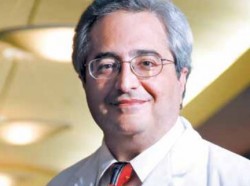 In 1990, he entered general surgery practice at EJGH, where he was also involved in quality-improvement and performance-improvement measures, and he became EJGH’s Chief of Staff in 1997. Dr. DeCorte was intrigued by the way a hospital system worked, especially one as big as East Jefferson. “Being involved at a higher level, you can see how medicine is so much greater than just your practice and patients,” Dr. DeCorte says. “It goes beyond just the one-on-one level, affecting hundreds of people.”

He became Medical Director in 2006, working closely with EJGH’s medical staff of more than 650 physicians, and more than 700 nurses and technicians. Since that time, he has also led initiatives that focus on clinical effectiveness, patient safety and the transition to electronic health records. “We are a top-ranked hospital for patient safety, and it has been no small matter getting to this point,” Dr. DeCorte says. “Our physicians, nurses and staff share a commitment to quality care and patient safety.”

Patient safety has always been the No. 1 goal for Dr. DeCorte, who became EJGH’s Chief Medical Officer in 2008. “In a time of budget crunching among community hospitals, we continue to be committed to providing the best patient care possible,” he says. “For us, it’s not a money issue. It’s a commitment issue. What sets us apart is our shared culture of commitment to put patient safety first and foremost, to encourage nursing staff and physicians to speak up when things can be improved, and then effectively implement those changes.”

In 2012, the hospital made the shift to electronic medical records and orders, a transition period that Dr. DeCorte admits was a true hurdle for the staff. “Not only did we need to ensure that we had adequate training and tools, but we also needed to leverage the value of this new electronic methodology so that it became functional but not obstructive,” Dr. DeCorte says. “This has been our biggest challenge, but also a huge asset, over the past several years, but we are constantly educating our physicians and nursing staff to make the system more effective.”

A board certified general surgeon, Dr. DeCorte still practices and sees patients on a regular basis, which he says is integral to his success as Chief Medical Officer. “Continuing to practice as a physician helps ensure my perspective remains on direct patient care,” Dr. DeCorte says. “Not only does it lend a certain level of credibility, but it also helps to create a more robust change in the care process when you know how things are implemented at the patient level. It’s very rewarding to still practice, while also participating in overall hospital improvement.”

Both in his practice and at the higher level, Dr. DeCorte ensures that EJGH has a foundation of continuous success. The hospital has formalized weekly educational seminars for physicians and nursing staff on the latest updates to regulations, advancements in technology and changes that are being implemented to ensure accident avoidance measures.