Walking into Kenton’s Restaurant is almost like walking into someone’s home. The entryway has a casual elegance that is inviting and tasteful. 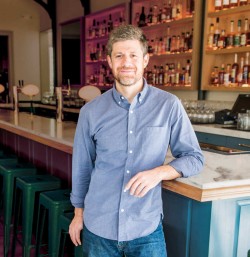 This is exactly the feeling that owner Sean Josephs wants customers to have when dining at Kenton’s, which opened in October in a beautifully renovated space at 5757 Magazine St. in Uptown.

“What we’re offering is great food executed at the highest level, minus the formalities of traditional fine dining,” Josephs says. “We want you to come as you are and feel comfortable, whether you’re here to celebrate your anniversary or to just sit at the bar, and have a beer and a dozen oysters!”

Josephs and his wife Mani Dawes have both been involved in the New York restaurant scene for more than a decade. Josephs owns Maysville, an American whiskey bar and restaurant located in Manhattan’s Flatiron Building, and Dawes, originally from New Orleans, owns Tia Pol Restaurant, a Spanish tapas restaurant in West Chelsea. While the two have been involved in each other’s restaurants in the past, this is the couple’s first collaboration together.

When the reality of raising three young children in Manhattan encouraged Josephs and Dawes to consider relocating to Uptown New Orleans, Dawes, who grew up in the neighborhood, quickly identified the potential of this prime location for the new restaurant. It’s on the corner of a bustling commercial intersection (on the corner of Magazine Street and Nashville Avenue), yet it’s surrounded by beautiful homes.

“The location dictates the approach we take with our restaurants,” Josephs says. “Kenton’s has a very residential feel. We’ve designed a true neighborhood restaurant. We’re open seven days a week, pretty much from 8 a.m. until 11 p.m., so whenever you come in, you can have a meal!”

The 3,000-square-foot elegant dining space was designed by Berman Horn Studio, with whom Josephs worked on his previous ventures. The centerpiece is a long marble bar that stretches the length of the restaurant, and the two dining rooms feature plush, dark green leather booths and gleaming marble tables, plus custom Bevolo lanterns, giving Kenton’s an intimate bistro feel. A five-panel glass mural, featuring the Mississippi River, was created by Dawes’ mother, local artist Nancy Dawes, to divide the bar space from the dining area. The restaurant can seat 90 guests throughout the two dining rooms and the bar space, plus 30 more outside on the patio.

The menu is just as inviting. Created by Kenton’s chef and partner Kyle Knall — who hails from Birmingham as a disciple of Southern chef Frank Stitt and of Gramercy Tavern’s Michael Anthony in New York — the menu highlights the smoked, grilled and charred flavors that pair well with bourbon, which is a theme among all of Josephs’ restaurants. Even the name is a bourbon reference, named after Simon Kenton, a frontiersman who founded Maysville, Kentucky, which was known for producing bourbon. Though Kenton’s carries more than 150 different whiskeys, Josephs also put great effort into the wine list, a full cocktail menu and an extensive craft-beer collection.

Kenton’s menu features a raw bar, serving oysters on the half shell; shareable small plates like heirloom tomato, roasted okra and sheep’s milk feta flatbread; appetizers like green tomato and gulf shrimp salad; and standout entrees like the low-country classic Chicken Under a Brick and local favorite, Louisiana red snapper. “We also have a wood-burning grill and smoker with plans to make our own ham, bacon and duck sausage,” Josephs adds.

While there is a shared focus on quality of food and service among both New York and New Orleans diners, Josephs is quick to point out that this neighborhood location has already lead to an influx of regulars. “It’s such an incredible opportunity to serve the locals in a town like this,” he says. kentonsrestaurant.com