Like most experienced sommeliers, Ray Gumpert, wine director at Emeril’s New Orleans, is just as comfortable — and enthusiastic — talking about a rare, exclusive wine as he is about an affordable, everyday bottle. 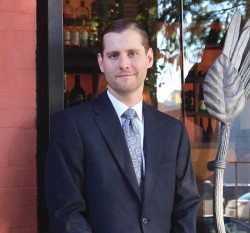 “The greatest part of my job is also one of the biggest challenges,” says Gumpert, who began working at Emeril’s restaurant NOLA as a busboy when he was 18. “I have to constantly be learning [and] keeping up with the latest wine research. That means doing a lot of tasting, but also traveling — I’ve been to Burgundy, Champagne, California Wine Country — and a lot of reading.”

Gumpert is a first level quarter master sommelier, and is basically self-taught, having first been exposed to the wine world by the sommelier at NOLA Restaurant during his tenure there. “Wine became both a hobby and a part of my job,” he explains. “As I advanced from busboy to back waiter to front waiter, I had to learn about it for work, and it became both a personal and professional passion of mine.”

As a member of Emeril’s team, Gumpert has worked in Miami and Atlanta — even assisting with the opening of Emeril’s Miami — before becoming sommelier at Emeril’s New Orleans in 2008. Gumpert says he is thankful for the incredible opportunities that Lagasse has given him professionally, and he is proud of what the chef has done for the community as a whole.

“Emeril gives so much back to the community,” Gumpert says. “He basically built the Warehouse District by putting his restaurant there. What he does for children through his foundation and his whole impact on the community is unmatched. It’s awesome to work for a company like that and a leader like that.”

This higher standard of quality is reflected in the wine list that Gumpert has created for Emeril’s New Orleans, a 67-page tome that showcases more than 2,000 bottles and has been a Wine Spectator Grand Award-winning list for 14 years running.

“I update it daily,” he says of the list, which includes a thoughtful combination of Old and New World bottles in a wide price range. “The goal is to have a selection that will pair well with our ranging menu, but also to have a wide array of high quality wines spanning the globe.”

With a wine list as extensive as this, it’s easy for customers to get intimidated when choosing a bottle, but Gumpert, who is in the restaurant most days, loves this aspect of his job.

“The easiest thing is to be honest and straightforward with a customer,” he says. “I don’t tiptoe around what they like to drink; there are no wrong answers when it comes to what someone likes. When it comes to a matter of price, a lot of customers might get nervous, but I like to help guide them and then show them several options at different price points to find something they are comfortable with.”

When it comes to seeking affordability in the increasingly competitive wine world, Gumpert says customers would be surprised by the incredible values found in European and Old World wines. He is also a fan of an American wine, ForeFront, which is produced by Pine Ridge Vineyards in Napa.

“It holds a special place in my heart, because I bought a bottle the first time I took my mom to NOLA for Mother’s Day while working there. You can’t beat it for the price, [which is less than $30 per bottle].”

Though he loves to find a good value, and help customers do the same, Gumpert says there is one bottle he would love to drink, if money were no object, and he knows exactly with whom he would share it.