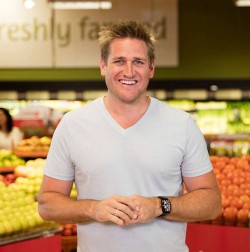 Long before he was an internationally recognized chef, Curtis Stone was a 4-year-old tyke at his mother’s knee watching her prepare the Christmas meal. “The main thing I cherish from my Christmases in Australia is the effort my beautiful mum Lozza put in to make it super special for my brother Luke and I,” Stone recalls. “She used to bake these mini sweet mince pies that were such a hit with the whole family.”

Now, many years later, Stone has traveled across the globe, starred in countless cooking shows and opened his first restaurant — Maude (named after his grandmother) — in Beverly Hills, California. Aside from the early culinary inspiration from his mother and grandmother, Stone also spent more than eight years working under the brilliant London chef Marco Pierre White. “He was the youngest chef in the world to win three Michelin stars,” Stone says. “His White Heat cookbook was the first cookbook I ever read.”

Although home cooks all across the nation have experienced holiday meal catastrophes, you’d expect nothing but perfection from Stone, an exuberant young chef who worked his way through the ranks at Mirabelle and Quo Vadis in London. But like the good sport he is, Stone openly admits to being human. “When I lived in London, we used to go to the pub every year to listen to the Queen’s speech,” Stone says. “One year I got up, put the turkey in the oven, went to the pub and realized I’d locked us out of the flat. We had to jump the fence, steal the neighbor’s ladder and climb in the back window.”

With all of his many successes, from hit television shows to best-selling cookbooks, Stone has been eager to “spread the love” as it were — partnering with organizations like SecondBite and Feeding America, which seek to end hunger and food waste in Australia and in the United States. Just recently, Stone partnered with Winn-Dixie in an aim to help people eat nutritious meals, even the holiday feast, within a reasonable budget. “There’s no escaping the fact that Christmas is an expensive time of year,” Stone says. “So it’s really key to watch your costs and keep spending down where possible.”

According to Stone, the key factor to creating a holiday meal (or any meal) on a budget is purchasing produce in season. “The holidays land in the fall and winter, so produce like potatoes, cranberries, citrus, carrots, Brussels sprouts, parsnips and winter squash are in season,” Stone says. “It is less expensive to buy ingredients in season as they are abundant; they’re sourced locally, which means less travels costs to you and the earth; and [they] pop with natural flavor, so you only have to treat them simply to make them taste great.”

With the Cooking with Curtis for Under $10 program, customers at Winn-Dixie now have access to simple-yet-delicious recipes created by Stone that are guaranteed to not only be healthful, but also be cost efficient. “I’m really enjoying my partnership with Winn-Dixie and our shared philosophy that, ‘Great Food Makes for a Great Feast,’” Stone says. “We both have a passion for creating wholesome, delicious meals for families on a budget.”

Just in time for the holidays, Stone’s partnership with Winn-Dixie is featuring specific recipes for your upcoming holiday meals. “The potato and Brie gratin is the ultimate cheesy comfort side dish,” Stone says. “I serve it straight from the baking dish so that it stays nice and warm at the table, and the steam releases when you cut into it — cue the oohs and ahhs from your guests!” Find this recipe and more — like mustard-crusted prime rib with mushroom jus or sticky date toffee cake — at your neighborhood Winn-Dixie.

238
previous Happening Holidays
next Libations for Locals: A Toast to 2016!