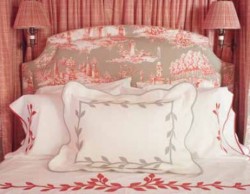 Jane Scott Hodges, creator of local linen company Leontine Linens (located at 3806 Magazine St.), was recently recognized by Martha Stewart as a 2015 American Made award winner, an honor that she was pleasantly surprised to receive.

“It is such an honor to receive recognition from someone for whom I have the utmost respect,” Hodges says. “I have always admired Martha Stewart for her reverence to both the artisan and the craft, and her efforts to perpetuate these arts in our country. To be recognized that I’m doing my part to preserve an American craft is just the pinnacle of achievement to me.”

On Nov. 7, Leontine Linens was honored — along with nine other small businesses from across the country in the fields of food, crafts, style and design — at the 2015 Martha Stewart American Made Summit in New York. Since 2012, Stewart and a panel of judges have been highlighting those small businesses who are dedicated to creating beautiful, quality products that ultimately change the way Americans eat, shop, work and live.

Dedication to craftsmanship and time-honored tradition is what sets Hodges and her company apart. For the past 20 years, Leontine Linens has been doing things the old-fashioned way, custom-making linens to order, cut directly from the bolt of personally selected fabric. “There’s no digitizing,” Hodges says. “Every sketch is hand-drawn and made by real artisans at our historic Kentucky studio.” Custom creations typically have an eight-week turnaround.

Founded in New Orleans in 1995, Leontine Linens was born out of Hodges’ passion for handcrafted, monogrammed linens that began when she found a family collection of monogrammed linens and diaries. At the time, she was planning her own wedding and fantasizing about her new married monogram. “I thought how great it would be to have my own collection of beautiful linens,” she says. “And if I wanted them, likely others would want them too!”

She discovered the historic Eleanor Beard Studio in Kentucky, where a team of skilled artisans was preserving the past, one piece of hand-stitched linen at a time. The studio, which had started in the 1930s, was closing, and Hodges decided to purchase it. Today, Leontine Linens still handcrafts all designs out of the same studio, using the same traditional, hand-guided methods, but Hodges infuses designs with a modern twist. Her signature oversized, brightly colored graphic monograms and insistence on linens being everyday pieces, not items to be treated as display-only relics, is what originally got Martha Stewart’s attention back in 2002.

“It is a marvelous twist of fate to be honored by American Made,” Hodges says. “When we purchased the Eleanor Beard Studio, Martha discovered us and invited us to be on her show. She has always given exposure to small businesses that we never would have had otherwise.” Since then, Leontine Linens has been featured in national publications like Martha Stewart Living, Martha Stewart Weddings, House Beautiful, Southern Living and Architectural Digest.

Much like any bespoke item, custom linens are an investment — but they are one that Hodges insists is worth making. “Linens are part of your whole day,” she says. “Your sheets, your towels, your napkins. Everything we make is meant to be lived in, to be used, loved and cared for. It’s about creating things that are beautiful and can still be enjoyed!”

To set Leontine Linens’ designs apart, Hodges says that they treat a monogram as more than just an embellishment. “I took the notion of monogram, which was often considered an afterthought, and decided to make it a statement, so it becomes a reflection of who you are.”

Leontine Linens offers a nearly infinite number of personalization options, with both a large collection of monogram and border designs as well as the ability to create something completely custom. Helping clients narrow down their selection and make a statement is one of the aspects of the business that Hodges enjoys most. “The nature of our product is so custom, everything starts with a conversation,” she explains. “The fun is in the process! I love understanding how people live. We want you to use these pieces, to wash and dry them, live with and enjoy them, so it’s important for us to know our client’s lifestyles.”

Though she loves variety, Hodges says that there is one style that will always be a mainstay. “The Etienne monogram style in gold thread on an ivory dinner napkin is like the little black dress of table top,” she says. “It goes with everything and still resonates as a classic!” She also adds that cocktail napkins don’t have to match — they can be fun — and she encourages clients to approach setting the table the same way one would approach getting dressed, saying, “With the right linens, you can change the whole mood!”

The company’s success and national recognition is a testament to the personalized approach that Hodges brings to each custom project. “Individual focus is our strength, and it’s why we’re good at what we do,” she says. “We make each piece in America, one at a time, by hand. It’s amazing to be part of a craft that people are so proud of producing.” leontinelinens.com