With top-notch slots and a glitzy restaurant, Austin Miller plans to transform the Fair Grounds into a must-see destination 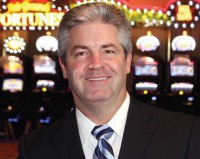 Horse racing is a sport, and people watch sports for entertainment. That’s why Austin Miller, the new president at the Fair Grounds Race Course & Slots, says, “As a nontraditional racing executive, I plan to renew the Fair Grounds’ focus on entertainment, as well as operational excellence.”
The racing season runs for 87 days, from November to March, with races held four or five days a week. The Fair Grounds also operates nine offtrack betting facilities in the New Orleans metro area, where fans can place bets on Fair Grounds races or on races being run just about anywhere.

But the newest aspect of the Fair Grounds—and the original reason Miller was brought to the track, which is owned by Churchill Downs—is the slot-machine casino. Since September 2007, the Fair Grounds has been operating a temporary slot facility with 250 machines in a no-frills building. However, a sparkling new venue is opening early this month, with 600 of the latest slots, a VIP parlor, a high-denomination room, two quick-service restaurants and a 135-seat all-you-can-eat buffet.

Miller says the slot machines are meant to attract a local audience, people who live within a 15- or 20-mile radius, but during the racing season, that reach is larger. “We see our competition as Harrah’s, Treasure Chest and Boomtown Casino,” explains Miller. “Because of our smaller size and high staff-to-customer ratio, our competitive advantage is it’s easy for us to manage the floor. We also offer a neighborhood feeling with lots of repeat customers who know each other. It’s not like an impersonal destination resort.”

The reason the Fair Grounds launched a slots casino to begin with was to shore up its horse races. Like poker, horse racing is a pari-mutuel game, meaning betters are vying for a total pool of money wagered while the house takes a small cut. It’s a low-margin business in the end. And as more gaming options have opened to the public and racing purses have gotten smaller, enthusiasm for the sport has diminished nationwide. The Fair Grounds is using 15 percent of slot machine revenue to increase purses, which will in turn boost public interest. Another 3 percent goes to Louisiana horse-breeding associations.

As poker has become the rage, Miller is optimistic that racing will follow a similar upward swing. “We want to take some of the lessons of poker’s popularity and apply it to racing,” he says. “We want to make a day at the track a fun, memorable experience. It has the potential to be one of the most popular things in this city.”

The Fair Grounds is entering its 137th season, so horse racing is certainly one of the oldest entertainment options in New Orleans. Miller himself, however, is quite new to the horse-racing business and comes to it from a casino background, one reason he describes himself as a nontraditional racing exec. “I have no preconceived notions of what may or may not make the product attractive to current and future customers,” he states.

Miller spent his high school and college years in Minnesota. An internship with a sports team there grew into a sales position. That in turn led to a sales position at Grand Casino, which was opening facilities in the state’s Native American reservations. As Miller moved up through the ranks, Grand Casino transferred him to the Mississippi Gulf Coast in 1995 to help with its Gulfport and Biloxi properties. Ten years later (and a few months before Katrina), he moved to New Orleans when Harrah’s tapped him to supervise gaming operations. In 2007, he signed on with the Fair Grounds to launch the slot machine casino and recently was promoted to president after the former president stepped down.

In his spare time, Miller doesn’t really gamble. “The adrenaline you get from it can be a great rush, but I’m around it so much; I prefer to deprogram with a nice glass of wine and a dinner at Restaurant August,” he says.

Indeed, Miller seems in touch with New Orleans’ gourmet scene, and he intends for the Fair Grounds’ dining room to take its place in it. He’s hired a new chef, Raymond Derderian, who has been busy remaking the menu and expanding the wine list. “We want to get on the list of places in New Orleans where people must go dine,” says Miller.

As far as the horse racing as entertainment, Miller is reaching out to all sorts of visitors. For the hard-core enthusiasts, he has planned VIP lounges, conference calls with jockeys and trainers and a seamless experience that takes into account everything from parking to racing forms to food. For the first-timers, he plans to help them learn about racing so they will become loyal fans.

For many New Orleanians, the first time they’ve ever come to a race is Thanksgiving Day. It’s the premier social event, with dapper men in vintage suits and classy ladies in broad hats and white gloves. Traditionally opening day, Thanksgiving sets attendance records, but the amount of money wagered isn’t even in the top ten. So for the benefit of regular racing fans, opening day is being moved up.

“November 14 is the grand opening of the new slot facility and the racing season,” says Miller. “Everyone around here can’t wait.”

214
previous A Step Above
next Smoking Gunn