Exploring new frontiers in orthopedics, Dr. Russell Russo offers innovative treatments that he brought from his experience treating professional athletes in Houston back to his hometown of New Orleans. 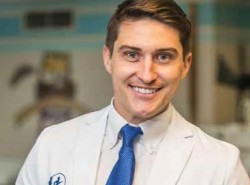 “I’d rather take care of everybody’s moms and dads and all the high school athletes, people who can’t just travel wherever to get medical treatment,” Dr. Russo says.

While Dr. Russo performs an array of traditional arthroscopic, or scope, surgeries and orthopedic treatments, what makes his strategy different from other orthopedists is his focus on the biologics aspect of orthopedic healing. In a process called bone marrow aspiration, Dr. Russo extracts mesenchymal stem cells from a patient’s bone marrow during scope surgery and spins the cells in a special machine to get bone marrow aspirate concentrate (BMAC). Dr. Russo then injects the BMAC into the area he is repairing to stimulate healing and help cartilage, bones, ligaments or tendons regrow.

The process is similar to using platelet rich plasma (PRP) to facilitate healing, but Dr. Russo calls BMAC “the next generation of PRP.”

Dr. Russo began working with BMAC during his fellowship at Houston Methodist Hospital, where he treated both professional athletes from Houston sports teams and older patients. Many of his older patients came in with torn rotator cuffs, and, as people age, the body has a lower ability to heal that area. So while repairing the cuff, Dr. Russo would also use BMAC to stimulate physical healing that otherwise might not happen.

Dr. Russo decided to bring his specialized sports medicine expertise back to New Orleans, an area that lacked the same orthopedic resources that Houston or other major cities might have.

“I thought it would be nice to take that level of training and bring it back to treat the high school athletes, the local aging athletes who don’t always get that extra level of care,” Dr. Russo says. “I don’t want people having to travel to Houston or Boston or Chicago to get treatment that they can get at their doorstep.”

That drive to treat young athletes and the everyman may have come from Dr. Russo’s own early experiences with orthopedics. While playing football at Archbishop Rummel High School, he broke his ankle and was treated by Dr. Charles Murphy, with whom Dr. Russo now practices. Dr. Murphy used a bone stimulator, physical therapy and X-rays, all of which sparked an interest in the young Dr. Russo that stuck with him as he entered college.

After studying microbiology at Louisiana State University for two and a half years, Dr. Russo felt undergraduate studies weren’t a necessary step and decided to take the MCAT. He left college early to attend LSU School of Medicine and became a physician a couple of years earlier than usual.

Dr. Russo has mixed feelings about being a young doctor. “It’s good and bad,” he says. “It’s good because you’re young — you’re getting out there earlier, paying off your loans earlier. You’re doing what you want to do at a young age. The bad is that the patients look at you and say, ‘How old are you?’”

Putting his youth to good work, Dr. Russo cares for patients in a number of facilities across the New Orleans metropolitan area. He is based in Lakeview at one of the three clinics overseen by the Orthopedic Center for Sports Medicine, but Dr. Russo also visits the Kenner clinic a few times a week, where he grew up and still has friends and family. He also visits the new New Orleans East Hospital half a day each week to treat patients without transportation or who face a language barrier to receiving orthopedic care, particularly the local Vietnamese population. Dr. Russo’s wife, also a physician, speaks Vietnamese and works with him to translate.

Dr. Russo has turned his attention to New Orleans in other ways as well, having written a paper about gunshot violence in orthopedics, which was based on his time working at LSU Interim Public Hospital and will be published in January in the journal Orthopedics. He also wrote a paper on bath salts and necrotizing fasciitis (flesh-eating bacteria), published in Orthopedics in 2012, which landed him a show on National Geographic and other national media coverage.

In the end, no amount of fame can tear Dr. Russo away from his patients right here in his hometown.
“I’d like to be how Dr. Chuck [Murphy] was when he was young,” Dr. Russo says. “Basically the local physician people can call anytime, someone people can count on being a member of the community.”
Russell Russo, M.D.
7030 Canal Blvd.
(504) 943-5777

878
previous Have Yourself a Healthy Little Christmas
next Murtuza J. Ali, M.D. - A Passion for the Heart