The defending national champs have turned scrappy, and that’s not exactly a good thing 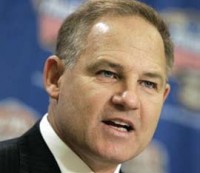 Yes, the defending national champions—a phrase Louisiana football fans have become overly used to—are on their heels. After Tigers fans watched their team receive its first dose of hemlock against the Florida Gators in Gainesville in mid-October, a 51–21 defensive collapse of mind-bending proportions, two weeks later they were asking themselves just what they had done to deserve a second, a 52–38 fall to the Georgia Bulldogs on the hallowed field of Tiger Stadium.

After barreling through two semi-prostrate Division I-AA teams in the early going, the Tigers lurched their way through victories at Auburn and at home to Mississippi State. Nonetheless, astute observers may have sensed something was amiss, as the team did not have its characteristic verve of last year; the quarterbacks had not been so quick at the helm; and the coaching, although still of a gunslinging philosophy, seemed to be misfiring a few shots along the way. Telltale signs were available for the wary: two turnovers each versus Auburn and Mississippi State. As a consequence, this team, in contrast to the flash-and-dash descriptions applied to last year’s, was more regularly deemed “scrappy.”

And yet that sort of close gamesmanship could not supersede some basic weaknesses in a team that was due to face much tougher opponents in the forthcoming ever-challenging SEC season. Sandwiched around a win at South Carolina, LSU lost these blistering games to two teams regularly baying at their door for the SEC crown, Florida and Georgia, in almost identical fashion. Both the Gator and Bulldog games featured massive differentials in quarterbacking talent, key interception returns for touchdowns at crucial moments, dominating 100-yard-plus rushing displays by opposing backs and quick deficits off big plays to open the game, followed by furious and promising comebacks just as soon, followed by second-half thrashings rarely seen since the days of Curley (aka the 5th Stooge) Hallman. Only against South Carolina was LSU able to overcome an early deficit (again) and maintain its momentum.

But not only has LSU been losing games, its defense seems to have sorely suffered from the loss of Bo Pelini and the substitution of two “co-defensive coordinators” (one in the press box, one on the field) who seem to be failing at managing a national championship–caliber defense with several players who until recently could be found on the lists of players likely to be drafted in the first two rounds of the NFL draft (among them, Darryl Beckwith, Patrick Peterson, Ricky Jean-Francois, Tyson Jackson). This same defense, which under Pelini was regularly feared, instead surrendered more than 50 points each time in the season’s two most important games. It’s a heck of a trivia question, whether that has ever happened before, much less how many times LSU has ever in its 105-year history allowed more than 50 points at home. LSU fans who used to complain bitterly of the fickle play of cornerbacks Jonathan Zenon and Chevis Jackson must realize now that they were spoiled after witnessing scoring plays of 42, 49, 68 and 70 yards in these two most decimating games.

The offense has vexed as well. Tiger fans at the Georgia game may have rubbed their eyes looking at the box score in the local rag the next morning, seeing how their offense had outgained and matched the opposing offense’s scoring output yet still lost by 14. Indeed, LSU’s version of Ensminger-Woodley reborn, Jarrett Lee and Andrew Hatch, have been forced into starting a year earlier due to the Ryan Perrilloux fiasco, and by those standards they have performed admirably. But the bottom line is that in comparison to the Tim Tebows and Matt Staffords of the SEC, they are seriously deficient. Cries of “Jordan Jefferson,” the next freshman QB phenom, can be heard on the wind, but considering the forthcoming schedule, such a change would hardly seem likely to forestall what is becoming an ever-likely 9-3 or 8-4 finish (replete with mid-major bowl invite).

Meanwhile, starting in November, LSU has Tulane, Alabama, Troy, Ole Miss and Arkansas to look forward to. Aside from the once fierce rivalry with the Green Wave now being sadly reduced to the “get better and fix it game,” which is how Les Miles is assuredly promoting it to his team, the specter of Nick Saban and a Darth Vader–like reentry into Tiger Stadium looms like an somber specter before the purview of all Tigerdom. Having brought back “the magic” all those years ago, Saban now promises to bring a gris-gris-laden curse of memory complemented by tokens of offensive explosions that will make all his former purple-and-gold acolytes wince. Les Miles has until the Alabama game to motivate his team and staff to face down their demons so he himself will not be faced with a host of new ones in the form of angry boosters.

106
previous Payton’s Prospects
next The Other Side of Winning