Home IN THIS ISSUE A New Beginning at Tulane
IN THIS ISSUE
SPORTS
January 3, 2016 Paul Wegmann 0

A New Beginning at Tulane 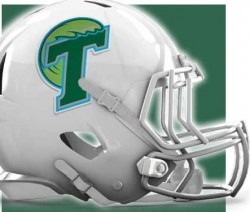 There was a time when the roar of tens of thousands of football fans echoed down the Claiborne Avenue corridor. This was not the roar of Saints fans in the CBD but rather those of the Tulane Green Wave Uptown. It was a long time ago, but it is worth remembering that it was Tulane that built the city’s crucial sports tourism industry in a number of ways: by playing a major role in the founding of the Sugar Bowl; by forging a bond between the city and the Southeastern Conference, which lasts to this day; by building one of the largest stadiums in the country (the Sugar Bowl stadium on Willow Street); and by proving the ability of the city to sustain a big time sports program in the burgeoning national football market. Gradually, somehow, choices were made to deemphasize the football program at the university, including leaving the SEC, just as the country was beginning to buy into college football in a huge way. In recent years, small private schools like Northwestern University, Temple University, Duke University, Vanderbilt University, Texas Christian University and Stanford University have all established winning programs in the major conferences.

It is in this light that this past December, Tulane took a big leap forward in hiring a new head coach for its football program, Willie Fritz. While Fritz has toiled since 1997 doing big things at small programs in small towns, from the University of Central Missouri and Sam Houston State University to Georgia Southern University, he has earned conference championships at every stop. He now finds himself in the heart of arguably the best high school football recruiting grounds in the nation, New Orleans and Louisiana, which produce the most National Football League players per capita of any city or state in the nation, respectively. Other advantages include presence in a top 30 national television market and a football crazed populace — both of which could potentially be a boon to fundraising.

However, only three coaches have produced consecutive winning seasons at Tulane in the last 65 years: Henry Frnka (1948-50); Vince Gibson (1980-81); and Tommy Bowden (1997-98). It is difficult to identify any one reason that Tulane has struggled in recent decades, but, chiefly, there has been the inability to recruit top-level athletes with sufficient size and speed to compete at the highest level combined with insufficient game-day coaching. At times, the Greenies have had coaches who excelled at one element but not the other. Since 1990, Tulane has generated 31 NFL players, and that includes five players picked in the first three rounds. Fritz seemed to recognize the recruiting potentialities upon his hiring, and it may have played a role in his choosing Tulane as much as the school chose him, as he stated upon his arrival that, “New Orleans and the surrounding areas are a hotbed for high school football, and I look forward to the challenge of building Tulane into a consistent winner.”

Standing behind Fritz’s hiring is new Tulane Athletic Director, Troy Dannen, who faced similar challenges at the University of Northern Iowa, which he ultimately overcame to establish one of the best small college football programs in the country. Dannen suggested some of the keys that led to Fritz’s hiring: “Willie was our No. 1 target of this coaching search from the day it began.,” he said.

“We attracted significant interest from around the country, but, after meeting with the candidates, it was clear Willie was the right fit for our institution and our football program. He has rebuilt three football programs and led each of those programs into national prominence at their respective level. In his 23 years as a head coach, Willie has an established track record of producing quality men, high academic achievements and great competitive success.”

Fritz also explained that possibly one reason he won the job was his track record of turning programs around quickly. “It’s the opportunity to do something that’s never been done there before,” he said. “Our goal is going to be to bring a consistent winner to Tulane. [Dannen] knows it’s going to be quite a chore, and he felt like I was the right guy for the job.”

Tulane has had head coaches who have gone on to major programs after generating winning seasons, such as Frnka (TCU), Larry Smith (University of Southern California), Mack Brown (University of Texas) and Tommy Bowden (Clemson University). However, Tulane’s program became mired in long stretches of mediocrity in between. History proves that Tulane head coaches can succeed; the difficulty has come in sustaining that success. For instance, Tulane’s head coaches went a collective 67-131 under three head coaches after going undefeated under Bowden. One of Fritz’s key attributes is his past record of turning programs around in short order, and his career record of 193-74-1, including 40-15 at Sam Houston State and 17-7 at Georgia Southern, as a head coach demonstrates that.

This special skill set, which Tulane needs so badly, can be seen in Fritz’s first head coaching job at Blinn College, a junior college program that had won only five games in the three seasons before Fritz’s arrival. In his first four seasons, Fritz would go 39-5 and win two junior college national championships, and, ultimately, he was inducted into the NJCAA Football Hall of Fame for the legacy he left there. Altogether his 193 collegiate wins places him fourth among all active head coaches. Perhaps Fritz’s biggest win came at Gainesville, Florida, in 2013, when his Eagles shocked the Florida Gators 26-20 for their first-ever win against an Football Bowl Subdivision team.

Fritz is also married with a family, and his wife Susan and his three children have been an integral part of his success as they have been embraced in every community in which they have lived. With Fritz, Tulane has a solid chance of finally rebuilding its program with an eye toward sustaining long-term success and reviving the city’s passion for college football.

267
previous Owning It
next A Past with a Strong Future