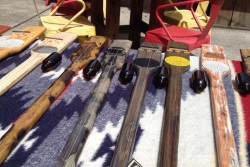 Armond Cheramie’s paddle slide guitars are not traditional Cajun instruments, but they do capture traditional elements of South Louisiana culture: food; music; and an innovative spirit that turns swamp creatures into cuisine and scrapes out rhythms from washboards. “It’s symbolic of a lot of things in South Louisiana — cooking mixed with music,” Cheramie says. “It’s functional folk art.”

That creativity and self-sufficiency shows in Cheramie’s musical background. The Thibodaux resident’s interest in guitar was first piqued around the age of 13, but he took bass lessons for only two months. It was enough time to gain a foundation in music theory. Cheramie now plays about eight instruments, including piano, accordion and banjo, with a focus on blues and slide guitar.

The guitar-making venture started on a fluke, Cheramie says. It was a spontaneous idea inspired by his experimentation with making cigar-box instruments and replicas of gourd banjos. That hobby got Cheramie seeing guitars in all kinds of odd places.

“You catch yourself looking at a stop sign and thinking you could put a string on that and make it into an instrument,” he says. “I’ve always been interested in the fact that you don’t need traditional instruments to make music — you just need the urge, and you’ll find what you need to.”

By early 2015, Cheramie had picked up a basic feed-store paddle, often used to stir big pots of jambalaya or crawfish, and used his instrument-making skills to fashion a functional guitar. A photo of the instrument hit social media, and, within weeks, a television crew with NCIS: New Orleans had spotted the guitar online and bought several, including one for use as a prop, Cheramie says.

His shop is in Thibodaux, but Cheramie regularly sells his guitars at New Orleans art markets and shows. The guitars are also available at Dirty Coast on Chartres Street. CheramieSwampMusic.com
Relationships in Center Stage: Lux et Umbra is set to rattle gender roles with Late: A Cowboy Song.

Love can arrive on the trail in unexpected forms — sometimes even riding up as a cowboy named Red, who happens to be a woman. Unconventional romantic relationships get the limelight in Late: A Cowboy Song, the latest production at the Old Marquer Theatre New Orleans, housed in the former Shadowbox location at 2400 St. Claude Ave.

Late: A Cowboy Song, billed as a heartwarming comedy with thought-provoking themes, runs Jan. 7 through Jan. 22, with shows at 8 p.m. Thursdays through Sundays. The production forms part of the second season by Lux et Umbra, the new resident company of the Old Marquer Theatre.

Penned by award-winning contemporary playwright Sarah Ruhl, Late: A Cowboy Song centers on three characters, starting with Mary and Crick, a pair of childhood friends who seem to have an ideal marriage. But lately, Mary has been spending more time with Red, a woman described as a cowboy. As Red embodies this masculine archetype from the Old West, she shakes up dusty societal expectations for romantic relationships, according to Jen Davis, the play’s director. The show centers on the idea that, “You are attracted to the person you’re attracted to, no matter the gender,” Davis says.

“I hope that they walk away understanding that it’s possible for two people to come together dependent only on themselves and independent of gender roles,” Davis says. “That actually all it takes is two people wanting to be together.”

Davis, who also serves as artistic director for NOspace, a New Orleans-based found-space theater company, says that while the play involves themes relevant to contemporary society, the heart of the show comes down to a topic as old as human history. “It is really just about relationships — who makes you feel how you want to feel and the surprising places you can find that,” Davis says. oldmarquer.com
Beam Us Up – Star Trek: The Ultimate Voyage concert tour will transport New Orleans audiences to new realms.

New Orleans live music and sci-fi fans will be transported through five decades of Star Trek adventures when the Star Trek: The Ultimate Voyage concert tour touches down in New Orleans this month. The tour, which includes a show Jan. 27 at the Mahalia Jackson Theater, coincides with the 50th anniversary of the groundbreaking Star Trek franchise.

Star Trek: The Ultimate Voyage is produced by CineConcerts, a company known for blending footage from powerful films, such as The Godfather and Gladiator, with live performances of the films’ scores. CineConcerts, CBS Consumer Products and Paramount Pictures have teamed up to present Star Trek: The Ultimate Voyage in more than 100 cities throughout the United States and Canada. “The Star Trek franchise has for many years been an important and meaningful part of our culture in so many ways,” says Justin Freer, producer and founder of CineConcerts.

With shows like Star Trek: The Ultimate Voyage, CineConcerts aims to highlight the artistry of film and television scores, which play critical roles in storytelling but are often overlooked or so effective that they meld into “the background tapestry of the emotional experience,” says co-producer and writer Brady Beaubien. “Films have always been about transporting someone to another place. The film score has always been one of the most effective devices to ignite this process.” Tickets cost $35-$60 and are available through ticketmaster.com. StarTrekUltimateVoyage.com

*Photos for the crawfish paddle guitars courtesy of Armond Cheramie