Supporting the future of young African American girls in the New Orleans area has become a passion project for Ariel Wilson, founder and president of The Orchid Society. 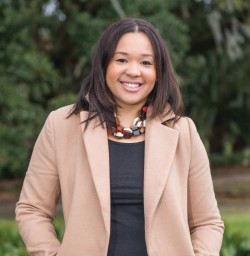 This group of African American professional women provides assistance and mentorship to a group Wilson feels is underrepresented and underserved in the community.

Wilson attended St. Mary’s Academy in New Orleans, a high school for African American girls. It was there that she found inspiration in the sisters who gave her classmates and her the guidance and empowerment to be the ladies they were meant to become.

“It was an honor to go there,” Wilson says. “There were classmates of mine who came from various backgrounds, and it was an opportunity for them to get their education in a safe and caring environment they may not have received at home.”

Seeing the positive effects St. Mary’s Academy had on its female African American students, Wilson returned to New Orleans from Houston, where she lived for five years following Hurricane Katrina, with a mission. Katrina had shortly followed Wilson’s graduation from the University of New Orleans, where she studied mass communication.

Concerned about the negative effects Hurricane Katrina may have had on local youth, Wilson gathered a few friends to start an African American professional women’s network, which became The Orchid Society in 2010. These women go through a rigorous selection process “because we hold our members to high standards,” Wilson says.

“Obviously they are in these young girls’ lives, so we have to make sure that they are already active in the community, are a positive role model, have a lot going for themselves and could actually impact these girls’ lives,” Wilson says.

The 11 members of The Orchid Society currently work with nine girls, called Orchid Buds, in this year’s class. Wilson says the organization’s goals are to build the girls’ leadership communication and management skills and to instill life lessons through six months of programming, which the organization has done for more than 30 girls over the years.

In addition to year-round communication with a mentor, the young ladies participate in a variety of programming, ranging from fun get-togethers like beignets in the French Quarter to a yoga class, and health and wellness talk at City Park. Wilson and the mentors also focus on sharing the history of powerful African American women and the positive images associated with them.

“There’s this focus on social media and reality TV, and a lot of the images of African American women that are portrayed are very negative,” Wilson says. “We need to make sure our girls know that there are positive images of black women who do things for the community that actually lead to where we are today. And a lot of the girls come into the program not even knowing that.”

Wilson recognizes that opinions about debutante balls are mixed, but she fondly remembers her own debutante ball experience at St. Mary’s, which she says instilled confidence and taught her about etiquette-building and becoming a lady.

To make this goal a reality, The Orchid Society depends on fundraising events like the Orchid Honors Dinner held Jan. 9 in honor of the organization’s five-year anniversary as a community partner. A number of African American women were publicly honored for their contributions to the New Orleans community.

When Wilson isn’t presiding over The Orchid Society, she works in communications and fundraising development for the Children’s Bureau of New Orleans, a mental health agency serving local youth and their families.

“I know mental health can be a taboo subject, but it’s such an important subject that people overlook sometimes,” Wilson says. “I don’t work directly with the kids, but I try to tell the story via marketing without exposing the families. … And really, mental health has a lot to do with what I’m doing with The Orchid Society.”

Whether she’s working with the Children’s Bureau or the young women of The Orchid Society, Wilson dedicates her time and enthusiasm to youth in the community, particularly young African American girls, who Wilson says have a great need for guidance and mentorship.

“We tell our girls, the color of your skin should not define the content of your character or how well you can work,” Wilson says. “And don’t feed into the stereotypes. Be bigger than what people expect you to be when they think stereotypically of African American women.”