Demetrius Grosse shines in 13 Hours: The Secret Soldiers of Benghazi, Game of Silence and Westworld; champions the rebuilding of New Orleans and serves as a celebrity co-chair for the Louisiana SPCA’s Howling Success Gala. 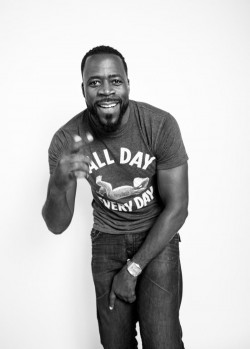 Actor Demetrius Grosse is a rising star, charging full speed ahead on an impressive path in Hollywood. He’s best known for his television work on Alan Ball’s popular Cinemax series Banshee as affable Deputy Emmett Yawners, and on the Emmy-nominated FX drama Justified as Errol Butler, the loyal wingman to criminal leader Ellstin Limehouse. In film, he appeared in the Golden-Globe nominated Saving Mr. Banks opposite Emma Thompson and played Rock in Straight Outta Compton, the Oscar-nominated, multi-award winning blockbuster movie about revolutionary hip hop band N.W.A. And thanks to the multiple upcoming projects that Grosse will be featured in this year, audiences will be treated to plenty of the versatile, handsome actor on screen in the near future.

Grosse stars as DS Agent Dave Ubben in Michael Bay’s gripping thriller 13 Hours: The Secret Soldiers of Benghazi. The film premiered in theaters nationwide on Jan. 15 and recounts the terrorist attacks that occurred on Sept. 11, 2012 on a U.S. diplomatic compound and a CIA annex in Libya that took the lives of four Americans, including U.S. Ambassador Chris Stevens. “It was a phenomenal experience to be a part of this film,” says Grosse of the Paramount Pictures movie, also starring John Krasinski, James Badge Dale and Pablo Schreiber. “Women and men were in dire straits and had to step up. The movie doesn’t take as much of a political slant as some were anticipating. People thought it would bash President Obama or Secretary Clinton, but it’s really a heroic story about the night the consulate was ambushed by Libyan rebels and how everyone there collectively pulled together and were able to save lives. It was war, and they had to defend themselves.”

On April 7, the new dramatic thriller from CSI producer Carol Mendelson, Game of Silence, will air on NBC — and Grosse will be a regular on the show, based off the popular Turkish series Suskunlar (The Silent). “If people enjoyed Mystic River, they’ll love this,” Grosse says. “It has an interesting premise centered on a successful Atlanta attorney who has his perfect life threatened by his dark past after getting together with his long-lost childhood friends. The attorney, Jackson, is played by David Lyons of Revolution, and I play his nemesis Terry Bosch, who is essentially a multi-dimensional crime boss. But he’s also a family man; I like to think of him as Tony Soprano meets Stringer Bell. He was in a juvenile detention center with the lawyer — and they grow up and everyone goes their separate ways — and we see how they reconcile some differences and how some new dark secrets are discovered. The writing team is excellent and a wonderful group of directors is involved.”

HBO’s highly anticipated Westworld, the sci-fi Western produced by J.J. Abrams, is set to debut later this year and Grosse will star as Deputy Foss opposite Anthony Hopkins, Ed Harris, Evan Rachel Wood, Jeffrey Wright and James Marsden. “This show is inspired by the book and the film of the same name by Michael Crichton,” Grosse says. “We have a futuristic theme park populated by robots that allow people to explore their darkest fantasies. It’s going to be quite interesting as we move into this new era of technology and how people will have the ability to literally speak things into existence. You can never underestimate how powerful it is to be able to just say something and be able to manifest it. All of that and artificial intelligence are the key notes that we are going to hit on in this series. It’s going to be really provocative and exciting for audiences to delve into.”

In addition to big-budget films and super-interesting television shows, independent projects also have major appeal for Grosse. He is currently writing, and will direct and act, in the adventure film Godfrey. “It has to do with existentialism, kind of like Road Trip meets Fear and Loathing in Las Vegas,” Grosse says. “We’re doing the funding groundwork now to get it in production.”

Grosse, who owns a home in New Orleans, finds it important to continue to highlight the ravaging effects of Hurricane Katrina that still loom for the city and its people through his work. He played Bug in Samaria, a short film by Kiel Adrian Scott that won a D.G.A. Student Film Award. “It’s about how the tragedy of Katrina still has reverberations, and how it united people from different walks of life to come together and find common ground,” Grosse says. “Thematically it takes off of the Good Samaritan in the bible. It’s got homegrown flavor; Kiel is from New Orleans and his brother Christian Scott is a world-class musician who went to NOCCA and composed music for the film. There are lots of great films coming out from the younger generation who love the city and what it stands for, who are passionate about preserving the heart and the soul of New Orleans.”

With his partner, producer Ashley-Nicole Sherman, Grosse did the documentary Last Cry for Katrina: Bringin’ Back the Big Easy. “The film is an anthology where we tracked people in the Ninth Ward, Gentilly and Ponchartrain Park who rebuilt their communities,” Grosse explains. “We went to Wendell Pierce’s family’s home. It’s a trials and triumph story where we see how grassroots always seems to get things done by generating and pooling resources.”

In fact, Grosse is so committed to the robust rebuilding of New Orleans in the wake of Hurricane Katrina that he is a minority owner in T.W. Sherman, a commercial and residential development company in the city. “We are re-building dilapidated homes at discounted rates for families,” Grosse says. “You’ll see a piece on CNN about communities rebuilding, and it seems very remote until it happens, sadly, to someone you know or yourself. You realize you have to take power in your own hands and not be afraid to get your hands dirty. The silver lining to Katrina is now we see a real flux in business. The movie business is booming and jobs are coming back. When the Saints won the Super Bowl, we saw a people with a resilient culture. I’m a fan of the food and the music, from Louis Armstrong to Herman Sherman, the brass bands, the second lines, Wynton Marsalis, Terrence Blanchard, all of it! New Orleans is the darling of America and everyone who goes there falls in love with it; it’s just an infectious place.”

Grosse was born and grew up in Washington, D.C. “I really thought I was going to become a veterinarian, because I love animals, and a basketball player, but frankly I wasn’t good enough,” Grosse says, laughing. “But I had acted in plays, so, in college, I really got into theater and the classics.” He graduated from Howard University’s School of Drama, and he also studied at the prestigious drama programs at Carnegie Mellon University and University of Oxford. “When I moved out to L.A. to pursue acting I would work in kennels and do assisting in veterinarian hospitals,” Grosse says. “I got my first opportunity to be an extra on The Wire. One thing led to another, and I’ve been able to have a career I’m proud of that people are starting to respond to.”

A love of dogs drew Grosse to become an honorary celebrity co-chair for the 2016 Louisiana SPCA Howling Success Gala, which will be held later this year. “I am so excited about Howling Success,” Grosse says. “By working in the kennels, you can understand and connect to even one life, and see what you can do for that life. They say, ‘All dogs go to Heaven’; anyone with any spiritual musings can relate. Dogs definitely have a soul, and they have healing qualities. That unconditional love of a pet has been shown to help people get through cancer and when they lose loved ones — all kinds of things. I finally have a yard, so I’m really looking forward to getting my next pet. Four years ago I rescued a dog named Chewie from a kennel in California and brought him to New Orleans. He’s not quite a German Shepherd K-9, but I heard rumors that a little Chihuahua-Yorkie mix is riding around town in the passenger’s seat of a police cruiser as the sheriff’s pet, so that’s a happy ending or really a happy beginning for Chewie!”

Grosse, a dapper man, also co-owns a men’s accessories line. “I come from parochial school, so I like to wear a collar,” he says. “I feel comfortable in a suit and tie. We have gotten so casual — what happened to just being classy? It makes a difference.”