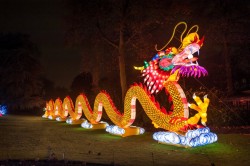 Evening strolls through City Park’s Botanical Garden become even more magical this spring as large, brightly colored Chinese lanterns float along the paths. The park’s China Lights exhibition, which kicked off in February and runs through May 1, features more than 30 large silk lanterns in a visually stunning display of Chinese tradition.

A 192-foot-long glowing dragon, a gleaming four-story pagoda, a lotus pond with brightly lit flowers represent a few of the sights to be seen in the garden display. The lanterns are brand-new, made from scratch for the New Orleans event by a team of about 100 artisans and technical staff with Sichuan Tianyu Cultural Transmission (a design and manufacturing company based in Zigong, China). The company has created similar displays in other U.S. cities and in Europe.

“We love being able to do something special for the people of New Orleans and for those visiting our fine city,” says Amanda Frentz, media manager for City Park. “We enjoy being able to make so many people happy with one event.”

China Lights is open 6-10 p.m. Sunday through Thursday and 6-11 p.m. Fridays and Saturdays. Admission is $18 for adults and $12 for children ages three to 12. Children under three get in free. Tickets for adults and children can be purchased at The Tolmas Center (the park’s administration building) and the gift shop in the Casino Building. neworleanscitypark.com

South Louisianans may not know the name Henry Howard, but most have seen his work. The Irish architect built much of his career during a nearly 50-year span in New Orleans, creating some of the grandest structures in the city and beyond. Howard’s influence can be seen uptown in the former Carrollton Courthouse, downtown in the Pontalba Buildings in Jackson Square, outside of New Orleans in the Nottoway and Madewood plantations, along with many more landmarks.

“He’s a star in the architectural firmament of New Orleans,” says John H. Lawrence, Director of Museum Programs for The Historic New Orleans Collection. Despite leaving a lasting impression as one of the 19th century’s most prolific architects, Howard has been “one of the most historically elusive.”

The current THNOC display, An Architect and His City: Henry Howard’s New Orleans, 1837?1884, aims to draw attention to Howard’s work with maps, rare books and manuscripts, as well as historical and contemporary photographs. The display complements the book Henry Howard: Louisiana’s Architect by Robert S. Brantely, co-published by THNOC and Princeton Architectural Press.

Howard, a native of Ireland, moved from New York to New Orleans in 1837, when the city ranked as the third-largest in America but was facing an economic crisis and a Yellow Fever epidemic. During the next nearly five decades, Howard witnessed urban growth and major events that shaped the region, along with his career. The exhibition incorporates local history, showing Howard’s rise to stardom against a backdrop that shifted from the opulence of the antebellum years to the Civil War to the challenges of Reconstruction.

“His fame was certainly out front during his lifetime,” Lawrence says.

“We don’t know if the drawings still exist — it’s a question we’d like to answer, but I don’t know if we will any time soon,” Lawrence says.

The 30th Annual Tennessee Williams/New Orleans Literary Festival runs March 30-April 3, bringing entertainment and writing education to local crowds through panels, workshops and performances in honor of the event’s namesake. The French Quarter-based festival involves more than 130 authors, actors and musicians, such as writer Dorothy Allison, a gregarious storyteller known for her 1992 novel Bastard Out of Carolina.

Allison, a longtime favorite at the Tennessee Williams festival, says she has been “thoroughly charmed” by New Orleans. Like many visitors, she speaks fondly of her first foray into New Orleans’ famed food and booze culture, but even more so of a lesser-known local obsession: literature.

“The pull of the city is the people,” Allison says. “The thing that knocked me off my butt was that everyone I met has books and writers that they follow religiously and that they want to talk about — everybody has somebody they adore.”

Allison also speaks at this year’s Saints & Sinners Literary Festival — an internationally recognized event geared toward the LBGTQ community. Saints & Sinners is set for April 1-3 at the Hotel Monteleone in the French Quarter.

As a mature writer, Allison says she gravitates toward offering guidance to newer writers. “It’s about giving back to a community that has given me so much,” she says.

Tennessee Williams and Saints & Sinners provide avenues for authors to do just that, especially since the festivals tend to generate unusually rich, genuine conversation among panelists, Allison says. Instead of stilted updates on their latest projects, writers often delve into topics like the writing process or social class and its impact on authorship.

The festivals connect writers with readers, an important facet as literature still changes readers in ways that Twitter and Facebook do not, Allison says. Books help readers develop empathy for characters unlike themselves — or very much like themselves.

“I’m the child of a truck driver and a waitress, and the world I was designed to inhabit was fairly miserable,” Allison says. “Books gave me hope.”

Works like Alice Walker’s The Color Purple and Toni Morrison’s The Bluest Eye, in which protagonists escape poor, abusive backgrounds, “changed how I saw the world,” Allison says, and allowed her to question paths prescribed for her by society. “Books are the doorway to revelation and change.” tennesseewilliams.net/festival, sasfest.org
*Photo courtesy of New Orleans City Park