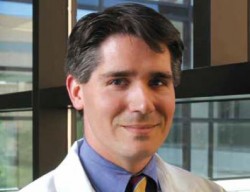 While not all doctors set out to become a hospital or clinic administrator, many do take on these roles, and, when they do, they may come to find that they can help even more patients in such a position.

Sidney “Beau” Raymond, M.D., chief medical information officer and vice president, physician practice administrator at East Jefferson General Hospital, came to that very realization in his own decade and a half as a board-certified internal medicine physician turned hospital administrator.

But Dr. Raymond did not always know this would be the career path he would take. He was first interested in studying marine biology as an undergraduate at Louisiana State University and later biology at Loyola University, where he transferred for a smaller, more intimate school environment.

While at Loyola, he met practicing doctors, discussed their lives and careers with them and realized that not only was he capable of becoming a doctor, he would enjoy doing it.

In his first position as a physician, Dr. Raymond was an internist at Browne-McHardy Clinic in Metairie for about two years before starting his own practice, first on his own, and later with a partner.

During that time, Dr. Raymond began working with East Jefferson General Hospital and took his first leadership role as vice chair, division of internal medicine, from 2004 to 2005.

By 2010, Dr. Raymond had been elected chief of staff at EJGH, and he also served on a variety of committees, including the Electronic Medical Records Committee, which he has chaired since 2014.

Through increased involvement in hospital administration and his work on this committee and others, including the Ambulatory EMR Steering Committee and Clinical Systems Committee, which he also co-chairs, EJGH named Dr. Raymond chief medical information officer in 2014.

Leadership roles aside, Dr. Raymond still sees patients as an internal medicine physician one day per week. But it is in his position as a hospital administrator that Dr. Raymond feels he has an even greater impact on patients’ lives.

“By being an internal medicine physician, I can affect the lives of people I see in my own practice, but that’s about it,” Dr. Raymond says. “Whereas when I do more administrative type roles, I can affect more of the community by doing so. So as opposed to just benefitting a couple thousand people, I can affect a much larger population by being involved with the administrative side of things.”

Within these administrative roles, Dr. Raymond says the primary drivers are quality improvement initiatives and expanding access to physicians for EJGH patients and other local residents.

One initiative for EJGH regarding growth and serving the community is the implementation of Teladoc virtual appointments, also known as telemedicine or telehealth, which began in February.

EJGH doctors do not perform the Teladoc appointments themselves, though Dr. Raymond says they may in the future. For now, trained Teladoc physicians offer appointments for patients 24/7, 365 days a year.

“It was a way for us to get more outreach to patients who may not want to make the journey into the office,” Dr. Raymond says. “So basically it’s for us to try to extend our ability to take care of patients.”

Many of these patients are not set up with a primary care physician, and with the Teladoc initiative, EJGH hopes to help connect many of these patients with physicians they can see regularly face-to-face for issues that Teladoc physicians cannot help them with. This improves patient care in the community, while also promoting growth at the hospital — a win-win solution.

With the help of Dr. Raymond’s leadership, this past October, EJGH was ranked No. 1 in Louisiana medical excellence and patient safety for overall hospital care by the CareChex quality rating system.

Going forward, Dr. Raymond will focus on continuing what he does best. “For me right now, it’s basically just trying to work on East Jefferson having better access for patients and continuing to grow East Jefferson General Hospital,” Dr. Raymond says. “My focus will be on the quality of care we provide here at the hospital as well as in our clinics.”
Sidney “Beau” Raymond, M.D.
East Jefferson General Hospital
4228 Houma Blvd., Ste. 400
Metairie, LA 70006
(504) 889-5250