Letting in the Light

Actress Kimberly Willams-Paisley pens a poignant, loving tribute to her mother, and furthers an important conversation on dementia and its agonizing effect on families. 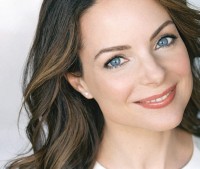 Actress Kimberly Williams-Paisley became an overnight sensation after her breakthrough performance in the smash remake of the film Father of the Bride as young bride Annie Banks, alongside Steve Martin who starred as George Banks, a father reluctant to see his daughter walk down the aisle. Williams-Paisley has remained beloved for her film and television contributions, starring in favorites such as According to Jim, Father of the Bride Part II, Two and a Half Men and Nashville. She’s also the devoted wife of Brad Paisley, and is often seen walking the red carpets hand-in-hand with the country music superstar at lavish events in Hollywood, New York and Nashville. Now, in her bravest role yet, Williams-Paisley has summoned the courage to author Where the Light Gets In: Losing My Mother Only to Find Her Again ($27, Crown Archetype, Foreword by Michael J. Fox) — hitting bookshelves this month — to enlighten readers about her family’s heartbreaking experience with a rare form of dementia that has debilitated her mother, and how they discovered hope, healing and light amid the darkness.

“It was therapeutic to write about it,” says Williams-Paisley, who, along with her father Gurney, her brother Jay and her sister, actress Ashley Williams, kept her mother’s shocking, early onset diagnosis in 2005 (at the age of 62) of primary progressive aphasia a secret for many years. “Writing the book helped me to look at it not as a tragedy but as an opportunity to take the reins of the story and do something about it, because you feel so powerless at times. We change as we age, and it’s possible we become totally new people. And when there is no other option, it became less painful when I was able to just embrace who my mom is now.”

Although extremely close-knit, loving, intelligent and accomplished, the Williams family has struggled emotionally, physically and every other way to figure out the next best step for their cherished wife and mother, Linda Payne Williams, who has become ravaged by the disease. Today she’s unable to talk, write or recognize her family after living a vibrant life. “I would have thought a family like ours could have handled this more gracefully, but there’s really no graceful way to handle it,” Williams-Paisley says.

“You’re not prepared for it. It’s messy; it’s ugly; and we made a lot of mistakes. My dad exhausted himself as my mom’s main caretaker; it’s common to think you can do it all yourself. Like the frog in the boiling water, you don’t realize you’re endangering yourself. As I say in the book, there are times we thought we’d lose my dad before we lost my mom. Being a mother myself based in Nashville and having a husband who always travels, I became a long-distance caregiver to my mom in New York.

Unfortunately, my sister Ashley carried a lot of the hands-on caregiving burden alongside my dad. We’ve leaned on each other heavily and we’ve become stronger through all of it.”

Through her book, Williams-Paisley wishes to alleviate some of the suffering that families will experience caring for loved ones with dementia by providing many personal stories for support and also resources to turn to for help. Williams-Paisley understands that by releasing such a relatable story on dementia and family, she is poised to shine a white-hot spotlight on herself as the go-to person on the subject. “I’m ready for that,” says Williams-Paisley. “It is healing for me to connect with people in similar situations. The Glen Campbell documentary I’ll Be Me was so brave; the more brave people that come forward and tell their story and shed light and hope on the situation, the better. There is so much to be done; we must focus resources on it, and I think we’ll get there. I want to shout it to the hilltops that we’ve got to pay attention to this. People don’t realize the statistics, but women in their 60’s are twice as likely to get this disease than breast cancer — and if you don’t have dementia or don’t know someone who does, chances are you will. It’s also more expensive than heart disease and cancer in the last five years of a patient’s life, partly because of the caregiving needs. People quit their jobs to become full-time caregivers; it drains a family and their finances. I want to raise as much money and awareness as I can, and a portion of the proceeds from sales of this book go to the Alzheimer’s Association.”

Along with the many amazing things Linda did throughout her life that Williams-Paisley recounts in her book, she was an incredible fundraiser for the Michael J. Fox Foundation for Parkinson’s Research. “She really admired Michael for making his story public to raise money and awareness for Parkinson’s research,” Williams-Paisley says. “I think about that now because for so many years she was so secretive about it. I think it was partly the disease talking, not her rational mind. I imagine my mother as her best self when she was fighting on Michael’s behalf, and I feel this is an opportunity for her to do the same through me. I have some guilt about sharing her story without her endorsement, but I have to rest in the memory of her as a very public fundraiser on behalf of another neurodegenerative disease.” In addition to the engaging foreword by Michael J. Fox, William Shatner, Robin Roberts, Brooke Shields and others gave solid praise for Where the Light Gets In.

Williams-Paisley is so passionate about advocating for people to educate themselves on long-term planning and caregiving for loved ones that she partnered with the National Association of Insurance Commissioners in 2015 for their Insure U consumer education campaign. “Even if someone isn’t sick, it’s still time to start looking into it,” Williams-Paisley says. “One mistake we made was not getting my mother’s specific wishes in writing; we didn’t have conversations about it. Families get themselves in challenging positions, having to quit jobs or liquidate assets. I have help, but the planning and the scheduling of caretakers is so hard and endless. The NAIC’s Website is a great resource; there’s a list of questions you can ask at any life stage to help you plan for the future.”

Readers of Where the Light Gets In will be treated to Williams-Paisley’s exquisite, thoughtful writing, a talent she likely inherited from her parents, both gifted writers. As she says in the book: “One day in the future, when scientists study her donated brain, they’ll find signs of her disease. They might see plaque … But they won’t be able to detect my mother’s courage. They won’t see her stubbornness, or humor, or infectious passion for life.” Williams-Paisley has clearly poured her heart out onto the pages of her book, striving to bring attention to a serious disease of the most complex of human organs. “The brain is so complicated, beautiful, amazing and mysterious,” she says. “Perhaps if we can unlock the mysteries of the brain, we’ll unlock mysteries of the universe.” The book also celebrates the beautiful and unbreakable mother-daughter bond, regardless of the dementia aspect. “She’s always going to be my mom. Many are caring for aging parents or loved ones with life-altering diseases, and my hope is that my book will touch even people who aren’t directly affected by dementia.”

And although navigating life in the wake of her mother’s illness is heart-rending for Williams-Paisley, she deftly balances her book with hopeful and often hilarious personal stories from various points in her life, including her childhood, her grade school talent shows and Hollywood auditions, her courtship and marriage to Brad, and raising sons Huck, 9, and Jasper, 7. And during big moments in her life, Williams-Paisley has always heard her mother’s voice directing her to take chances and live life to the fullest, a lesson she wants to pass on to her sons. “My mom taught me that ultimately, it was always best to turn any circumstance into something good and useful. I think about her all the time as I mother my boys. Huck’s teacher said, ‘Huck told me his Nana liked thunderstorms.’ I have to keep her alive with those stories because they’re actually listening to me and she is already living on in them, which is so cool. One of the surprises in all of it is how much my sons have helped me with that lesson of living in the moment, and accepting and appreciating my mother for who she is now. The joy of seeing my mom and my son play on the floor with exuberance and have such a special bond is something I’ll always have.”

The word “light” in the book’s title refers to the treasured glimpses of her mother that Williams-Paisley witnessed even during the progressed stages of her disease, including a funny story of how Linda pranked a caretaker. “I still get these little God winks in the form of things like gold paper clips, as I say in the book,” Williams-Paisley says. “There’s nothing scientific to it, but, to me, it’s significant. In the book I talk about the eagle, a yoga pose that’s become a symbol of acceptance for me, and the day I handed in my book to the publisher a bald eagle appeared on our property and stuck around for three days! That’s never happened before! To me it was a little God wink that this is what I’m supposed to be doing right now.”

Williams-Paisley stays busy with life in Tennessee with Brad and their sons, who shower their wife and mom with support, encouragement, love and laughter. “They’re three kids, let’s be honest!” laughs Williams-Paisley, in a nod to her husband’s well-known sense of humor. The family enjoys their two dogs, which includes a recently rescued puppy. On the acting/producing front, she’s currently developing a movie with a family legal theme for the Hallmark Channel, which may morph into a series. And quite possibly, New Orleans could be on her next vacation agenda; the city holds a special place in her heart. “New Orleans is where my husband and I first told each other we loved each other!” Williams-Paisley says. “It’s such a romantic place for us. It was the first city I went to on Brad’s tour bus — me and 12 guys! We have such great memories from New Orleans; Brad was on a float in the Orpheus Parade in 2004 for Mardi Gras. I love the food, the beignets and coffee for sure! I love the music; Harry Connick Jr. is awesome. It’s such a great scene, such a vibrant city, so different from the rest of the country. We love it there, and we’ll have to come for another visit.”