A Time for Rhyme: The New Orleans Poetry Festival debut will feature local and national poets. 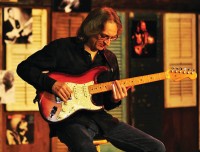 The rhythms and artistry of verse fill the air this month as the first New Orleans Poetry Festival puts on a three-day series of poetry-focused events. The festival, which runs April 15-17, is organized by New Orleans poets and small-press owners Bill Lavender of Lavender Ink/Diálogos and Megan Burns of Trembling Pillow Press with aims to create a more inclusive space for a range of poets.

At larger literary events, blossoming poets and smaller presses can sometimes get lost in the shuffle of big-name authors and major publishing houses. A sense of camaraderie can also get lost, not just at large events but in cities and towns across the country, when competition becomes the focal point. According to Burns, poets looking for community can find it in New Orleans, which makes the city a natural fit for hosting the fest. “When people come here, they go nuts about the community here,” Burns says. “I think our poetry community is really special because it’s more collaborative than competitive.”

The fest includes various styles: traditional, slam, spoken-word and performance poetry, among others. The opening night’s meet-and-greet at Siberia on St. Claude Avenue is followed by Poets with Bands, a showcase of live bands starring poets, such as Lavender’s The Call Girls.

April 16 events, spread among three stages at Arts Estuary 1024 and Mags 940, both on Elysian Fields Avenue, include readings, a small-press book fair and panels on topics like eco-poetry and poetry inspired by dreams. That night, featured poets read their work at Mags 940. April 17, the fest includes a printmaking workshop and a literary tour through the French Quarter before concluding with a trip Uptown to the open-mic at Maple Leaf Bar, one of the longest-running poetry-reading series in the South. lavenderink.org/poetryfest

An Inside Look at Outsider Art: Exhibitions at NOMA explore the work of self-taught artists.

Eleven feet tall and formed of wood, plastic, glass, metal and hair combs, the scale model of the Encyclopedic Palace of the World, created as a prototype, stands as a work of art in its own right, a lasting representation of the boundless vision of its creator, self-taught artist Marino Auriti. The striking sculpture, intended as a model for a colossal 136-story American version of the Library at Alexandria, also displays elemental qualities of outsider art: a wild creativity and make-do spirit found in the methods and materials used to compose the artwork, tools sourced and scavenged from daily life, and imagination unbridled by traditional training in the arts.

These qualities spread through many of the works on display at the New Orleans Museum of Art as part of Self-Taught Genius: Treasures from the American Folk Art Museum and Unfiltered Visions: 20th Century Self-Taught American Art at NOMA. The concurrent exhibitions, on display through May 22, are devoted to self-taught artists and their nontraditional creations. “Almost every piece in the show has a fascinating story behind it,” says Anne Roberts, institutional curator for the exhibits at NOMA.

Self-Taught Genius, which includes 115 pieces of art from the American Revolution to modern times, is a nationally touring exhibition organized by curators with the American Folk Art Museum in New York. Organized by theme instead of chronologically, Self-Taught Genius highlights the spiritual, political and other ideological threads that connect pieces spanning centuries. The exhibition also explores how connotations of the term “self-taught” have changed over time.

In conjunction with Self-Taught Genius, NOMA has organized its own corresponding exhibition, Unfiltered Visions, which features works from the museum’s permanent collection. NOMA has a strong history of showing and collecting folk art, reaching back to at least 1955 with a pioneering solo exhibition of Clementine Hunter’s work and a serious folk-art collection that started in the 1970s.

“Since NOMA was one of the first fine-art institutions to consider and appreciate self-taught art on the same level as the Italian Renaissance or contemporary photography, I think it’s important for our institution to share that with our communities,” Roberts says. noma.org

Louisiana bluesman Sonny Landreth likes the intimacy of small venues, but the slide guitarist said he’s excited for the special rush of entertaining crowds at the large outdoor stages of the 33rd Annual French Quarter Festival. “It’s a challenge,” Landreth says of performing on big stages. “It pushes you to come with the magic.”

Landreth is one of more than two dozen musical acts to make a French Quarter Fest debut this year as the annual event continues to present a dynamic, evolving mix of Louisiana music. The fest, set for April 7-10, involves more than 1,700 local musicians in what’s deemed the largest showcase of Louisiana music in the world, according to the festival Website.

In concocting the lineup, French Quarter Fest executive director Marci Schramm and entertainment manager Greg Schatz say they strive to create “the most exciting lineup possible,” with an increasingly diverse representation of all the local music scene has to offer. “As far as genres are concerned, we really cover a lot of ground,” Schatz says, with reggae, rock, funk, folk, blues, jazz and more spread across 23 stages.

An important part of the mix comes in this year’s festival debuts, which include big names like Cowboy Mouth and Buckwheat Zydeco, as well as promising newer acts like indie band Little Maker and roots-Americana act The Batture Boys, starring Tommy Malone of the Subdudes and Ray Ganucheau of the Continental Drifters. Debuts also include The Charlie Wooton Project, led by the popular Frenchmen Street bassist, and a performance by Mason Ruffner, an internationally touring guitarist who has worked with Bob Dylan and Carlos Santana, among other stars.

Landreth, leading an electric trio, plans to perform lots of tunes from his album released last June. Dubbed “The King of Slydeco” for his zydeco influence, Landreth returns to formative influences with Bound by the Blues, which features an even blend of blues classics and originals.
“It’s a tribute to my heroes and the music,” Landreth says. “Blues is a universal thing. It unites us.” fqfi.org