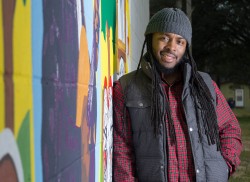 The inspiration for artist Vitus Shell’s new exhibition stems from a brief, but powerful moment on a Mardi Gras Day in New Orleans: the abrupt exchange of gunfire between young men, which caused no injuries and only a short interruption in festivities led by Mardi Gras Indians.

Shell, a native of Monroe, La., who was in town as part of an artist residency, was struck by the juxtaposition of the events — the sickening sound of gunshots versus the pride and grace of Mardi Gras Indian feathers and chants.

Shell said he remembers a staffer with the Joan Mitchell Center, the group hosting his residency, wondering if the group should continue to bring visiting artists to that area. And then his friend’s response, which hit Shell as an appropriate summation of black life: “She’s gotta understand you gotta take the good with the bad.”

“There are always those dualities of something beautiful and something ugly at the same time,” Shell says. Gun battles versus Indian beauty, black soldiers serving the U.S. overseas only to face discrimination upon their return home: Shell puts these contrasting realities on display in a striking series of portraits in his latest exhibition, Must Be Two Sides: The Dualities of the Black Experience. The show runs through May 21 at the McKenna Museum of African American Art.

Shell’s mixed-media work sets figures (usually acrylic portraits of everyday people) against layered collages. The collages represent layered issues, layered ideas, “Things that go on around us that sometimes go ignored but sometimes hit you in the face,” Shell says.

Shell’s work has been displayed in numerous venues, including Treo as part of Prospect 3 in 2014. The artist returns to New Orleans this month for a summer residency with the Joan Mitchell Center. 2003 Carondelet St., (504) 586-7432, themckennamuseum.com

As its first full season continues this month, The Theatre at St. Claude invites audiences to not just watch brand-new work by local playwrights, but to play a role in developing the work seen on stage.

The theater gained new leadership a year ago and since then has focused on presenting raw, original works-in-progress by a range of New Orleans writers.

The theater is working with various creative communities, like Southern Repertory Theatre and University of New Orleans playwrights, among others, to foster the growth of local playwright talent, according to a personal blog post by Fitzmorris at jimfitzmorris.com.

Audience feedback, through comment cards and discussions, will be encouraged. “They are a valued and trusted voice in works that may go on to bigger and better things,” Fitzmorris says. “They help create the works.”

Among this season’s offerings at the theater: Sideshow and Tell, May 13-15, featuring Coney Island sideshow performers Donny Vomit and Frankie Sin; Would Jesus Thank God It’s Friday?, May 27-29, starring Paul Oswell; Barker’s Edge of Town by Bradley Warshauer and The New Wave by Stephanie Garrison Warshauer, June 10-19; and The Killing of a Lesbian Bookie by Jim Fitzmorris, June 23-July 9; Halloween in July, starring Fitzmorris and Pandora Gastelum, July 14-16; Niagara Falls by Justin Maxwell, July 21-Aug. 6; and On the Verge by Eric Overmyer, Aug. 11-27.

Clash of the Comics: Local comedians are set to do battle at The New Movement.

As the New Orleans comedy scene continues to grow, comedy theater and conservatory The New Movement is challenging local comics to sharpen their skills with a series of showdowns.

“Every great comedy scene has a contest that acts as a goal for comics to work towards,” says Chris Trew, who founded The New Movement with Tami Nelson. “We feel strongly about the level of talent in New Orleans, and it’s time to have a big contest like this for performers and audiences to look forward to.”

The new contest, dubbed Hell Yes Next, kicks off with the first rounds of competition set for 10:30 p.m. on two Fridays in May at the theater. The final round starts at 7 p.m. June 24 at The Joy Theater. According to Trew, judges include notable locals and people working in the comedy industry.

The competition offers audiences a chance to check out a bevy of local comedians (organizers expect 30 to 40 comics to participate in the battle), which is open exclusively to New Orleans area residents. Any local comic is eligible to compete. The winner earns a spot on stage at Hell Yes Fest, an annual fall comedy festival presented by The New Movement in New Orleans. “I believe audiences will get invested in the contest and learn more about the deep talent roster in New Orleans,” Trew says.

New Orleans has for years held a handful of regular comedy nights, but the local scene has expanded and matured during the past several years. Fans can now find dozens of regular open mics and other live comedy events, featuring a variety of brand-new and experienced comedians, at venues throughout the city. The New Movement, which opened its doors in New Orleans in 2012, has been credited with greatly contributing to that growth by establishing a venue dedicated to nurturing improv, sketch and standup comics. 2706 St. Claude Ave., newmovementtheater.com