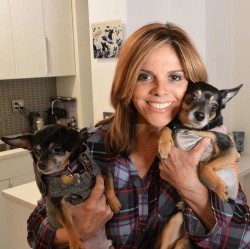 Esteemed national television journalist Jane Velez-Mitchell has made a name for herself for consistently leading an impassioned charge in a quest for justice. For years, she hosted Jane Velez-Mitchell, her own current affairs television show on HLN, and focused on noteworthy causes and bringing to light crimes against people, animals and the environment. She has guest hosted on Nancy Grace and has regularly appeared on networks such as CNN, E! and TruTV as an expert commentator on high-profile criminal cases and other newsworthy topics. The New York Times bestselling author also has penned four books to date. In 2014, she parlayed her passion for creatures great and small, and her journalistic talents, into Jane Unchained, her multi-platform social media news outlet that focuses on animal advocacy. This month, Velez-Mitchell will appear at NOLA Veggie Fest as the keynote speaker to encourage others to take the empathetic step of adopting a vegan lifestyle.

Velez-Mitchell is a veritable guardian for animals and has blossomed into one of the nation’s most prominent spokespersons for animal rights; she’s received accolades for her work, including four Genesis Awards from the Humane Society of the United States. She believes that human recognition of the sentience of animals is of grave importance, and that animal rights is the social justice movement of the 21st century. “The big leap we have to make as a culture is to start realizing that all these animals that we basically compartmentalize into this ‘don’t count’ box [actually] do count,” says Velez-Mitchell, regarding the perilous position animals find themselves in as sources of human consumption. “Pigs have a higher IQ than dogs and they have all of the personality and smarts of a dog.

That’s why a festival like the NOLA Veggie Fest is so incredibly crucial, not just to New Orleans but to the entire country and the entire planet. New Orleans is a cultural center, so if it goes compassionate and many from New Orleans switch to a plant-based diet, it will have a huge impact. This is the kind of change that America needs.”

NOLA Veggie Fest is a project of the Humane Society of Louisiana, a non-profit charity founded in New Orleans in 1988 that leads the fight against cruelty to animals statewide and strives to make the lives of all animals matter. The family friendly festival will educate the public on healthy eating, sustainable living and compassion for animals, and it will feature cooking demos, live music, short films, pet adoptions and more. Festival proceeds will go toward programs to aid abused, neglected and homeless animals. The all-vegan event is free, with VIP access passes available as well for $20. It will be held rain or shine May 7 from 11 a.m. to 6 p.m. and May 8 from noon to 6 p.m. at the Kingsley House (1600 Constance St.) in the Lower Garden District. Velez-Mitchell will speak at 1 p.m. on both days.

Velez-Mitchell, an outspoken vegan, is particularly thrilled to come to New Orleans to celebrate all things vegetable. “I love New Orleans,” she says. “I love the history; I love the ambiance; I love the sense of the past told through art and music. When I enter New Orleans, I feel like I’m in a movie or a novel! It’s just so rich in culture. Sadly, a lot of America is very cookie-cutter, but, when you’re in New Orleans, you know you’re in New Orleans! It’s totally different from any other place on the planet, and it has maintained its individuality so brilliantly. And everybody who is from New Orleans seems to have gotten an extra dose of personality!”

“I know New Orleans has a lot of great traditional recipes that they are proud of, and, yes, they can be veganized,” says Velez-Mitchell, aware of New Orleans’ reputation as a culinary mecca. And the veganizing of recipes is not a sacrifice, according to Velez-Mitchell, who embraces the vegan lifestyle as an adventure in food. “Not only are you healthier being vegan — you live longer; your chances of heart disease, cancer and other illnesses dramatically decrease — but it’s actually more fun to cook veggie,” she says. “I’m — knock on wood — 21 years sober this year.

With sobriety, I learned that deprivation does not work. You can’t just take something away; you have to replace it with something better. There’s more variety being vegan; there’s thousands of plants but there’s only so many meats! Corn, potatoes, carrots — that’s what most Americans think of when they think of plants. But I’m making vegan pineapple fried rice right now and I’m using pineapple, mushrooms, broccoli and tofu, and nobody died for this meal. People don’t realize that there is a great joy that comes from eating without killing. I don’t care what anybody says, on a reptilian brain level, they know they’re killing something. They’re killing someone. We have to stop being oh-so-very-polite in not confronting people about stuff like shoes made of leather; there was an individual, a creature who had a mother that someone is wearing. People need to be put in touch with that reality.”

Velez-Mitchell points out that the standard American diet is typically sad, unhealthy and the most restrictive diet on the planet. “Who wants to eat a burger, shake and fries every day of their lives?” Velez-Mitchell says. “It’s packed with so much sugar, salt and fat that it’s addictive; then an hour later, you want more, and you become obese and develop heart disease. They’ve determined that, regarding cancer, processed meat is carcinogenic. Not that it might be — it is! The World Health Organization issued a report saying processed meats, like deli slices and chicken nuggets, is cancer causing! The other day I saw a dad going, ‘You want some nuggets?’ and I thought, ‘Why don’t you offer your kid a cigarette while you’re at it?’”

Velez-Mitchell shares a home with her partner Donna Dennison and three rescue dogs, a Chihuahua and two Chihuahua mixes. “They are capable of engaging in synchronized howling, which sounds like they’re being tortured,” Velez-Mitchell says, laughing. “They are so smart; they don’t howl when we put the garbage out, because they can tell I’m carrying a bag, but when we’re dressed up and going out for dinner, they know!” And she wants the world to understand that other animals deserve the love and kindness showered on dogs.

“I heard somebody say that dogs are the gateway drug to getting involved in animal rights,” Velez-Mitchell says. “People love their dogs, and they need to start expanding that circle of compassion beyond dogs and cats to pigs and cows. People are starting to care about wild animals; the outrage over the death of Cecil the lion wouldn’t have happened 20 years ago, and that was a huge turning point. Blackfish was a huge turning point. But those are exotic animals, and I said in a speech the other day when I got a Waggy Award (from the Tailwaggers Foundation in Los Angeles, which provides funds to 501c non-profits who administer treatments to injured and sick animals), that, ‘If you love animals, you must know that the vast majority of animals that are being exploited are farm animals. You can take every other animal, all the dogs, cats, elephants, tigers, lions, chimpanzees, monkeys; as much as I love all of them, the biggest exploitation, the biggest torture, is animals for food.’”

Through Jane Unchained, Velez-Mitchell finds great joy being a voice for the voiceless through video news stories curated with her dedicated team, which includes Dennison, a techno-wiz according to Velez-Mitchell, as an editor. “I absolutely love doing Jane Unchained, and what makes me happy is when I do a demonstration that would have otherwise gone unnoticed, now 20,000 or 100,000 people see it online, instead of only people walking by on the street,” Velez-Mitchell says. “People put plenty effort into their demonstrations, protests, veg fests, and we need to have other people see it too. We are doing media training seminars to help people put together stories and teach them the nuts and bolts of using their cell phones as cameras to become media for animals.”

Velez-Mitchell has authored four popular books — Secrets Can Be Murder: The Killer Next Door, Addict Nation: An Intervention for America and The New York Times Bestsellers, iWant: My Journey from Addiction and Overconsumption to a Simpler, Honest Life and Exposed: The Secret Life of Jodi Arias. She has found an animal connection running through the books she’s written, from America’s addiction to meat and dairy to how murder is perpetuated against the living. “On my site, we have a support group basically modeled on The 12 Steps, for people who want to give up meat and dairy,” Velez-Mitchell says. “And I covered the trial of Jodi Arias, who killed Travis Alexander, and learned that Travis was becoming an animal activist and was fighting against the pig gestation crates in Arizona! Here was a good guy and the light bulb went off in his head about animal suffering. So there is a connection: crime. What’s happening to animals in America and around the world is a crime, and I cover it like a crime story. Keeping a pig in a crate who is never able to turn around is a crime. It’s very sad but we have to fight.

We’re not asking people to risk their lives, but we are asking people to do more than they are doing. If you care about animals, do more! Go that extra distance, because that’s the only way change happens.”

While evolution is often hard to see in real time, Velez-Mitchell feels strides in animal rights are being made. “The women who died right before women got the right to vote probably felt like the world would never change, but it did,” she says. “We’re in the middle of it with animal rights where we can’t see progress, but progress is occurring.

We get depressed and overwhelmed; people who have no consciousness make fun of you and minimize the issue. But guess what? This is the most important issue in the world right now, and I do believe the world is changing. We’re at the tipping point right now, and that’s why festivals like the NOLA Veggie Fest are so important.”