Since appearing in a General Motors magazine as a toddler, Michael George Lizanich II has been an avid admirer of the automobile. “I’ve always been a car guy,” he says. “I’m only 21 years old, and I’m currently on car No. 20!” 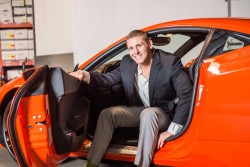 Born and raised in Scottsdale, Arizona, Lizanich moved to New Orleans after receiving a football scholarship from Tulane University. The scholarship enabled him to pursue a degree in business management with an emphasis on entrepreneurship. “I had two choices for school,” Lizanich says. “Both Tulane and the University of New Mexico offered me a scholarship, and it was either Albuquerque or New Orleans. Where would you want to live?”

With a father involved in all aspects of real estate, from investment to development, and a mother who specializes in interior design, it’s not surprising that Lizanich would strive for his own autonomy in the business sector. “I’ve always been a young entrepreneur,” Lizanich says. “I’ve bought and sold cars and real estate. I started off in the ATV industry where I bought ATVs and Quads.” The young industrialist even launched his own dorm room-cleaning service, while living on campus at Tulane.

Lizanich’s pioneering attitude and passion for automobiles put in motion an idea, which blossomed into a luxury automobile storage facility dubbed The Motorsports Garage. Touting itself as an “automobile concierge” service, the garage provides safe vehicle storage for the luxury and collectible car owner. With packages starting at $300 per month, a client can store their vehicle in a humidity-controlled facility replete with a 24-hour, cutting edge security system. Concierge services include everything from moving each vehicle bi-weekly to prevent uneven tire wear, to detailing, vehicle delivery, and repair and maintenance. “We like to tell our clients ‘Just drive the cars, and we’ll handle the rest,’” Lizanich says.

One would imagine that a full-time, senior-year, business management student at Tulane University — who is also holding down a job at Pelican Coast Clothing — would have little time to invest in starting a new business, but determination and perseverance have certainly paid off. “I opened this business because I want to put my roots down in New Orleans,” Lizanich says. “I realized that there was nothing like [The Motorsports Garage] in New Orleans, so I really wanted to jump on the opportunity while I could.”

Even though Lizanich sacrificed his college football career to open his own business, he doesn’t regret the lessons he learned while being a part of the Green Wave team. “Football helped prepare me for the real world,” he says. “It taught me that you can’t rely on yourself for everything; you need other people to make it.” Lizanich admits to frequently seeking advice from his family and from the investors who helped launch The Motorsports Garage. “I realized quickly that I simply couldn’t do it on my own,” Lizanich adds.

Though Lizanich has yet to bankroll a luxury automobile of his own, he definitely has his eyes on the prize. “If I could choose an everyday car, it would be a Porsche,” he says. “But for a weekend car, I would definitely prefer a Ferrari.” With his irrepressible entrepreneurial spirit and drive to succeed, we’re certain his dreams will become reality. themotorsportsgarage.com