Born in Orange County, California, Nicholas Busciglio was blessed with a childhood of privilege. Dazzled by the allure of Hollywood, Busciglio first sought to enter the world of filmmaking and attended the prestigious private Christian college Chapman University, graduating with a Bachelor of Arts in film production. 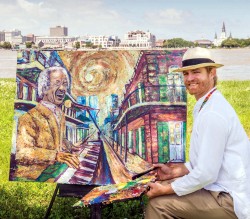 He even interned under Lawrence Bender, famed producer of almost all films directed by Quentin Tarantino, but something inside of Busciglio deterred him from perusing his course. “When I graduated, it was more a decision not to live in traffic for the rest of my life,” Busciglio says. “I moved back up to Lake Tahoe to figure things out and that’s when Katrina happened.”

Compelled by the urge to give something back, Busciglio moved to New Orleans in 2006 and became a part of an Arts as Healing program at the Mos Chukma Institute, located at that time in the Lower Ninth Ward. Though he didn’t study fine art in college, Busciglio had been drawing since his father taught him when he was 9 years old. It seems that something Busciglio once viewed as a hobby became the driving force of his adult life. “We were doing art therapy-type work around the devastating emotional and psychological impact of the storm,” he says.

Through a newly made New Orleans friend, Busciglio scored his first painting gig not long after moving to the city. In tribute to beloved local drummer Kufaru Aaron Muton, Busciglio was asked to paint a mural on the plywood shutter that protected the Blue Nile, a famous music venue on Frenchmen Street. “It was surreal because they had a second line that ended at Cafe Brasil across the street the day I started painting [Muton’s] face on the mural,” Busciglio says. The mural has moved inside the club to become a permanent part of the Blue Nile and has since been seen in HBO’s Treme and The Late Show with Stephen Colbert.

In between teaching at the Mos Chukma Institute and exhibiting his paintings annually, Busciglio slowly refined his technique on the urging of friends and mentors Amzie Adams and Brandon Delles at the Lisa Victoria Gallery on Royal Street. “They would always tell me, ‘You’re in a gallery, but that’s not good enough!’” Busciglio says. “They were always pushing me forward.” In addition to their urging, Busciglio was also heavily influenced by the color and style of famous local artists like James Michalopoulos and live painter Frenchy. “I paint the same subject matter that they do,” Busciglio says. “I like to capture the feeling of the moment.”

Through his mentors’ urging and the influences of local artists, Busciglio experienced an artistic breakthrough. “I had this sudden concept that everything was connected to the way I physically applied the paint to my canvas,” Busciglio says. “I started painting with a palette knife and applied the philosophy that everything was connected, and, by putting the lights in the darks and the darks in the lights, all of a sudden I had this really impressionistic looking work.”

Three years ago, Busciglio experienced two life-altering experiences that greatly affected his plans for the future. He married a beautiful, business-savvy woman he met during an extended visit to Columbia, and his father passed away, almost at the same time. “It forced me to make a decision,” Busciglio says. “I decided to quit my teaching job, and focus on my art, and aim to become one of the top painters in the city.”

With invaluable business advice from his wife and a full-time focus on painting, Busciglio’s painting career has really begun to take off. He is selling both original artwork and prints on his Website and around town at the Frenchmen Street Art Market, Palmer Park Art Market, YLC Wednesday’s at the Square and more. “I owe a lot to my wife,” Busciglio says. “She’s instrumental to my business, and I couldn’t do it without her.”

After almost 10 years living in the Crescent City, Busciglio can’t see himself making any other place his home. He came to New Orleans to give back, and the city welcomed him with open arms. “I’m very honored and humbled to be able to paint and promote the culture of New Orleans,” Busciglio says. “Art to me is like a reflection — what you put into it reflects back at you.”