With a disabled grandmother as his only guardian, Titus Perkins was forced to become the leader of his household at a very young age. “I was cooking since I was 6 or 7, standing in a chair to reach the stove, while [my grandmother] was in her wheelchair,” Perkins says. 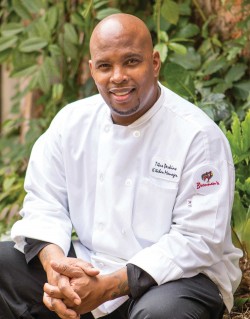 “My grandmother is from Mississippi, so we made that real Southern stuff … you know greens, cabbage, fried chicken.”

It wasn’t until after a run-in with the law at age 16 that Perkins landed a position — a 5 a.m. shift in the jockey kitchen at the New Orleans Fairgrounds — that would later lead to his current job. Perkins left such a good impression that his managers at the fairgrounds helped him score a dish washing position at one of the Ralph Brennan Restaurants for $4.50 an hour, and, as they say, the rest is history.

Over the 22 years of his employment at the Ralph Brennan Restaurant Group, Perkins strove to excel in all of the various positions he’s held, from prep cook and grill cook to pizza maker and baker, holding nothing back. But it wasn’t until his current role as Executive Kitchen Manager that Perkins truly found his calling: educating and motivating entry-level job-seekers and helping them realize their potential. “The problem I found while interviewing was that a lot of people didn’t know the proper way to apply for a job,” Perkins says. “You get people who come in wearing shorts, tank tops, flip flops … they fill out the application in marker or pencil. So, I started teaching them the proper way.”

Determined to help potential employees, Perkins began teaching applicants by showing them what they did wrong during the interview. “I’ll show them the mistakes they made; how they didn’t dress properly or speak properly,” Perkins says. “Then I have them come back a week or so later and do the process all over again.” In this way, Perkins has vastly expanded the work force at the Ralph Brennan Restaurant Group, and, since the company does most of its promotions from within, the only path for Perkins’ employees is up. “When you work for the Ralph Brennan Restaurant Group, you can come in as a dishwasher and you could become literally anything,” Perkins says.

Two decades of determination and hard work has not only supported Perkins, but it also has enabled him to put his two children through college. “My son is a sophomore at Mississippi State University studying computer technology and my daughter is a freshman at Philadelphia University studying marketing and fashion design,” Perkins says proudly. “I didn’t get to attend college. I missed that part of life because I had kids early, so, seeing them succeed, loving what they’re doing and bettering themselves, it’s worth every penny.”

For over a decade, the National Restaurant Association has honored individuals exemplifying diversity, leadership and achievement with its Faces of Diversity award. Perkins is the second member of the Ralph Brennan Restaurant Group family that has been so honored. And the Ralph Brennan Restaurant Group surprised Perkins with an extra bonus. “They sent my son and my daughter out to Washington, D.C., for the awards ceremony,” Perkins says. “So they got their all-expense paid trip as well, and they got to see their dad accept the award.” As a part of the award, the National Restaurant Association also established a $2,500 scholarship in Perkins’ name for an aspiring student pursuing a career in the restaurant and hospitality industry.

Appreciated by both his employer and employees, Perkins is always willing to roll up his sleeves and get to work, regardless of the task. “I’m a supervisor, but I still do everything that I ask my employees to do,” Perkins says. “I’m not one of those people who sit behind a desk at all. I do the same thing they do everyday.” When asked about his plans for the future, Perkins doesn’t even hesitate. “I’m going to retire from the Ralph Brennan Restaurant Group,” he says. This is it. I have no complaints. I love my job — I couldn’t see working for anyone else.” neworleans-food.com