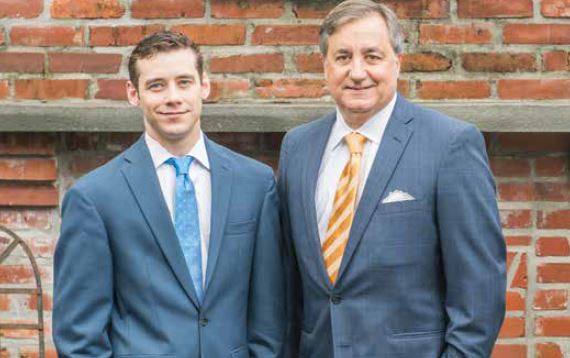 For 29 years, Raspanti Law Firm has made its name in New Orleans as a firm that is simply unafraid to go to trial. Joe Raspanti has established this reputation by fighting countless criminal and personal injury cases on behalf of his busy law firm. He even makes time weekly to serve as the WVUE Fox 8 Legal Analyst.

Now his clients are seeing double.

Raspanti’s solid foundation is under development with the addition of Joe’s son, Michael Raspanti, to the Raspanti team. And this Raspanti will be adding some new legal services — family and divorce law, child custody cases, succession and wills, and even elder law — to the firm’s repertoire.

While Michael is new to the firm; he is not new to practicing law.

He recently wrapped up a stint as an Assistant District Attorney in the trials division of the Orleans Parish District Attorney’s Office where he handled hundreds of criminal cases. Michael says there was a mutual feeling that he had gained invaluable experience from the position and it was time for him to enter the family business. “Plus I needed the help,” Joe says.

Michael says that every single case presented an opportunity to test himself in an adversarial environment. “Being in court all day is the best teacher,” he says. “It’s a learning experience in and of itself. If it’s not your case, it’s another attorney’s and their legal fights are unfolding before your eyes.”

His father agrees. “I was glad he started at the DA’s Office,” he says. “It grounds you as a trial attorney. Every case you have, no matter what area of law you practice, the ‘v’ in the middle stands for ‘versus.’ So you’re going to do one of two things: you are either going to resolve it or you’re going to go fight. If you haven’t ever been in a trial, you’re afraid of it. Michael has been to trial.”

And Joe isn’t worried for a minute about taking his son in to the firm. In fact, he fully expects his success.“Michael’s a lot smarter than me,” he says. His skills are solid; his experience is clear; and his addition to the firm is the best decision I’ve made in years.”

Michael is a New Orleans native through and through. He attended Jesuit High School; he graduated with a degree in business administration from the University of Southern Mississippi; and he came back to attend Loyola Law School. Along the way, he’s had many legal mentors to inspire him, starting with his father, of course, and including a few uncles (Roy Raspanti, Albert Ajubita) and a few aunts (Christine White, Pauline Hardin).

Joe says Michael shouldn’t expect to rest on his laurels at Raspanti Law Firm. “He was already in federal court for me last week on a complicated criminal matter,” Joe says. “On Monday, he’ll be on his way to Lake Charles for a drug case we have over there. So he’s getting his trial by fire here also.”

That’s okay by Michael who knows all about hard work and claims that his hobbies are staying up late and drinking massive amounts of coffee. While he may still be peeling the plastic coating off his new desk chair, he’s hit the ground running. And he doesn’t mind being the butt of a good lawyer joke.

“I suppose all those stereotypes are based off some truth in terms of the industry,” he says. “I like the lawyer jokes. I’m not sure why.” All joking aside, Michael says, “There’s no substitute for working hard and being prepared, because that translates into getting the best result for a client. That sometimes means going to trial.”
Raspanti Law Firm
3900 N. Causeway Blvd.
Ste. 1470, Lakeway 1
Metairie, LA 70002
(504) 836-7330