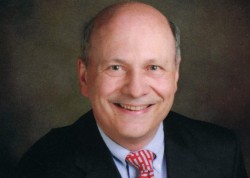 There’s no local fundraising walk. It shares an awareness ribbon color with lung cancer and a rare immune disease. Bone health doesn’t seem to get the attention that some other medical issues do. But that doesn’t mean it’s not important.

“We call osteoporosis the silent killer,” says Dr. William von Almen II, MD, OB/GYN at Touro. “There’s no hints you’ve got it until you’ve got it. It’s not easy to detect like a disease that causes a lump or bleeding. Nobody thinks much about it until they break something.”

In addition, osteoporosis numbers are not on the increase the way cancer and cardiovascular disease are. “But the numbers are already staggering,” Dr. von Almen says. “The costs are in the hundreds of millions of dollars if you take it as a national healthcare issue. We can be doing a lot more preventatively.”

That’s why he recommends “building a bone bank” to his younger patients. After menopause — once you lose estrogen — it’s not possible to put calcium into your bones, so you have to work on it much sooner. He counsels his patients on calcium and vitamin D intake to make their bones as thick and strong as possible. He advises a host of healthy behavior like exercise and no smoking that, as a bonus, helps prevent many other diseases as well (see sidebar).

Women with a family history of thin or frail bones need special care. “You can’t pick your parents — we have to recognize genetics do play a role,” Dr. von Almen says. “But you can certainly do the preventative things to help keep your bone as strong as possible so your lineage doesn’t do you in.” Other at-risk groups include steroid users and patients with hyperparathyroid issues. And though less common, men, especially smokers, thin men and steroid users, need to be aware as well.

There’s no magic bullet to cure osteoporosis, and the drugs physicians prescribe can actually cause more problems than they solve when used over a long period of time. There is also some debate about radiologic testing and how frequently a woman should have a density scan. “We are in a lot of flux as far as the medical management of bone health,” Dr. von Almen says. “That’s why patients need to talk to their doctors. We stay on the cutting edge of this constantly changing research.”
Guidelines for Bone Health
Dr. William von Almen II, MD, recommends the following regimen to his patients for maximizing the health of their bones:

Vitamin D levels in food
Salmon: approximately 400 i.u. (other fatty fish like tuna or sardines have much less)
Egg yolks and beef liver only have 40 i.u.

Dr. von Almen recommends routine blood work to check your levels. Too much calcium can cause heart issues. Not enough vitamin D means none of the calcium will absorb. Sun exposure, healthy food consumption and/or a multivitamin usually isn’t enough; he recommends purchasing a separate, liquid vitamin D supplement.