Wes Palmisano takes the torch at Palmisano Contractors from his father Warren. 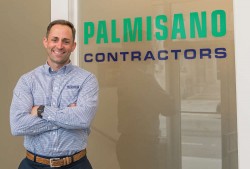 Wes Palmisano has always followed his dad. Around the yard while he was mowing. Out to construction sites when he was working. Into the family business where he worked summers and holidays as a teenager. And now, all the way to the top as the new president of Palmisano Contractors.

It’s the path that Wes has planned for himself since he received his first tool kit. “I decided early on that I couldn’t see myself doing anything else,” he says. “I’ve always pictured taking Palmisano to the next level …”

After high school, Wes didn’t see the point of continuing schooling because he had every intention of going straight to full time work. But his father, Warren Palmisano, Jr., was adamant. Wes finally relented. “I told him, ‘I’ll go. I’ll get a degree. But I’ll be back.’” Wes left for LSU on a mission and graduated in three years first in his class with a degree in construction management.

And just like that collegiate fast forward, Wes has pushed Palmisano to rapid new heights in his short tenure at the helm. The company has transitioned from mostly residential to commercial and civil projects. The five-year business plan for the company’s restructuring? Achieved in three. And the number of projects they’re able to balance at one time is only growing.

If you’ve seen the conversion of St. Anna’s into luxury apartments, the Joan Mitchell Center artist studios, the Ace Hotel, the new Trader Joe’s in Metairie or the Homewood Suites on Rampart, you’ve seen the Palmisano handiwork.

A generation ago, Wes’ father, Warren, and his uncle Rodney took over the business from their father, Warren, Sr. They believe Wes is just the man to take over for them. “Wesley’s very, very smart and very hardworking,” Warren says. “I’m extremely proud. He’s brought the Palmisano name to another level. It’s amazing the work he’s done. That comes from his hard work; doing what he says he’s going to do; and giving them a finished, satisfying product.”

Wes points to a unique focus when asked what makes so many people hire his company. He explains that they do business differently by concentrating on the enduring impact that their projects have on the community and the lives of the people who live there. He puts his money where his mouth is through the Palmisano Foundation, which partnered with PlayBuild to help kids plan and build their own outdoor classroom on Thalia Street in Central City. The company’s internal environment is also important to him. “People love to work here; they enjoy one another’s company and that comes out consistently throughout the process on any one of our projects.”

As a result of what he calls “the greatest management team in the city,” and from building long-lasting, strong relationships with their subcontractors, suppliers and architects, Palmisano Contractors doesn’t really bid many jobs. Ninety percent of the company’s work is through repeat clients and referrals.

Palmisano’s Contractors growth is capturing attention in the industry and it’s starting to rack up project awards from local builders’ associations, the Historic Landmark Society, the American Institute of Architects and even awards just for Wes — the Junior Achievement Rising Star, EY Entrepreneur of the Year finalist and inclusion on the NOLA 100. But the best reward, he says, is a good finished product. “The buildings people work in, the roads we drive on — we all get an immense sense of pride that we did that. We created this landmark in our community.”

Wes has a son and daughter of his own, and, while they’re exposed to his work, he has no intention of pushing them in to the family business. “My son is very interested in building and learning how things get made,” he says. “I don’t want to put pressure on him though. It’s not for everyone. It’s a tough, demanding business.”

Wes’ kids may have competition either way. Wes’ nephew Jeremy is studying construction management and interning with Palmisano this summer. The next generation of Palmisano builders is on their way.
The Elder Palmisano is Still the Sage
Warren Palmisano tried to retire — “a fiasco,” he says — and now works for his son. His main function is as a mentor to the management team and the entire crew at Palmisano Contractors. Wes says he helps keep everyone focused on the original core values that have kept the company strong. Here Warren shares some fatherly wisdom.

On work: “We always brought them up as work being a good thing, not a punishment,” Warren says. “When it was time to cut the grass, everybody cut the grass. I was out in the front and they were following right behind.” Warren and his wife have another son, Warren III, who is a dentist, and four daughters, all successful in various areas.

On retirement: “I made it two weeks and I’d had enough of that,” Warren says. “People don’t understand. After 52 years, that’s just who you are. You can’t imagine not working. It’s like breathing almost.”

On his father: Warren Palmisano, Sr., who passed away in 2012, founded the company after returning from overseas fighting in World War II. He was an artisan who hand-crafted cabinetry and carved wooden animals. “He was always so proud of Wes’ first job,” Warren says. “He’s smiling down on him now.”