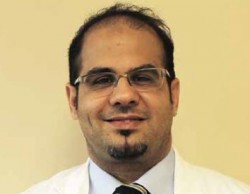 The human body has an endless need for oxygen, and, as such, our lungs are expanding and relaxing thousands of times each day. This complex, critical organ can malfunction or become diseased in a number of ways, which is where specialists like Dr. Mohammed Amari of East Jefferson Pulmonary Medicine come in.

“Lung diseases make up some of the most common medical conditions humans experience,” Dr. Amari says. For example, the Centers for Disease Control reports that almost 10 percent of the U.S. population suffers from asthma and nearly 7 percent of adults have Chronic Obstructive Airway Disease (COPD).

Dr. Amari’s patients run the gamut of breathing difficulties like emphysema and asthma to lung diseases like cancer and pulmonary fibrosis. He plans each day around his sickest patients.

“One of the things that I look forward to every time I come to the hospital is providing exceptionally good care, especially to those critically ill or dying,” Dr. Amari says. “This is why I became a pulmonologist in the first place. I fell in love with the ICU and working to make critically ill patients better.”

He says he was inspired by and inherited his work ethic from his father, the son of a farmer who became an engineer at Marathon and later, the CEO of Libya’s largest oil company.

Joining the East Jefferson practice has been a point of pride for Dr. Amari as it is one of the oldest practices in town — established in 1975 — and is consistently graded as a regional and often national leader. He says the mix of private and hospital care allows the physicians to strike a balance and work together to provide their patients with the best treatments.

Though it takes a good deal of planning to fit in hospital rounds on the ICU and other units with clinic appointments for less acute patients, he finds that by focusing on each patient, everything else falls in place.

“If you put the patients first and work with everything you’ve got, you’re not going to go wrong,” he says. “You’re going to do a good job.”

His very first evening on call for the group, he had nearly made his way home through traffic when he got a call that one of their patients suffered cardiac arrest. He turned right around and was pleased when the patient went home just a few short days later.

Success stories like these are what make his job so meaningful. Recently he administered an X-ray on an 80-year-old patient and discovered a node on a lobe of her lung. Normal protocol would be to re-assess the spot for growth in three months, but she was a smoker and he had a hunch it was cancer. “I didn’t waste any time on a biopsy. I sent her for a resection,” he said. “It was small cell cancer. But since we caught it early, she’s completely cured.”

He predicts more success for his future lung cancer patients as science becomes more precise at pinpointing specific genes that cause cancer and tailoring treatment to each individual. Also promising is a lung cancer screening study East Jefferson is participating in using low-dose CT. No one was willing to cause more cancer than they detected using high radiation CT. Outcomes will be published soon, but Dr. Amari says initial data suggest that it is going to save lives.

Other encouraging therapies for lung disease include new medications and devices, reduction surgery to remove low functioning portions of the organ and cyber knife surgery for patients who can’t tolerate open surgery. Finally, Dr. Amari is a huge fan of pulmonary rehab and is always surprised how patients don’t seem aware of it.

“It’s the next best thing to a lung transplant,” he says. “It improves exercise tolerance, relieves the feeling of struggle and boosts morale.” In just six months, he had a patient on oxygen go from unable to walk between two stores at the mall to finishing a 5K with her daughter.