After a week in a coma, college freshman Brittany Grunberg woke up to find that bacterial meningitis had barely spared her life but that it had taken both of her legs below her knees. She wasn’t angry, but she was frustrated. 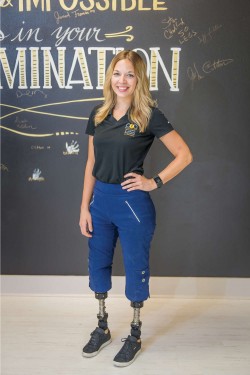 “A lot of people die from meningitis,” she says. “It’s such a fast disease. Everyone said, ‘You’re so lucky!’ But I lost both of my legs. I thought, ‘How can I be lucky?’”

That was pretty much the last time she felt sorry for herself. For the past 11 years, she’s been proving that not only is she lucky, but that she’s blessed.

After two years of pain, Grunberg’s father heard about Prosthetic and Orthotic Association Central Florida, supposedly the best in the business. Within a week of her first fitting, she was walking in full comfort and was soon able to re-enroll in college to finish a business administration degree. Just this year, she ran the Crescent City Classic — 6 miles — on running blades. (Her legs were fine, she says, her lungs were another issue.)

With Grunberg’s life back to normal, she had some serious goals to pursue. As a teen she thought she wanted to be a nurse, but after her experience with POA, her life was so changed, she knew she wanted to pursue prosthetics and help people move forward with their lives.

Determined to chase her dreams, she quit her job, moved to Orlando for over a year without her husband and trained at POA without pay on how to run a prosthetics business. Owner Stan Patterson never promised her a business of her own, but she knew it was what she wanted to do and she knew she couldn’t do it on her own.

She proved herself and then some. Now Grunberg and Patterson co-own POA of Louisiana, a friendly, meticulous prosthetics practice in Metairie. In the nine months since opening POA, she already has close to 50 prosthetic patients and is fitting orthotics for many other patients as well.

Work is a family affair: Grunberg’s father works for her fabricating limbs. The two couldn’t be happier about their mission. “We went through this together and met the most amazing people who put our lives back together, and now we’re helping others do the same,” she says. She said her dad was so excited after working on prosthetics for her that driving home from work the other day he actually passed his exit.

The centerpiece at POA is a giant black board with every patient’s name and a motivational quote: “The difference between possible and impossible lies in your determination.” When patients ask her how hard it will be or whether or not they can do it, she tells them: “It’s all in how you make up your mind. If you want to do it, you can do just about anything.

“All my patients say, ‘You’re an inspiration, you completely changed my life.’ No I’m not. I’m just doing what I was meant to do. But whether I want to be called that or not, I know what they’re feeling. I feel the exact same way about the people who helped me in the past. Little do they know, but my patients are an inspiration to me as well. We tend to forget how far we’ve come and how well we’re doing. You want to say, ‘Aww, you’ll be fine, it’s no big deal.” But it is a big deal. But they will be fine and we’ll get them back to their lives again.”

Though she wasn’t a big believer before, Grunberg knows now that helping people in her situation was her destiny.

“You can’t write a story any more perfect,” she says. “I do believe it all worked out for a reason.” poanola.com