Libations for Locals: A Man’s Man

If your dad is the type who can build a barbecue pit in the backyard with his bare hands, repair a leaky bathroom faucet formerly believed to be unfixable and still be dressed to the nines in time for a night on the town, he’s most definitely a man’s man who deserves to relax with a few fingers of whiskey in hand. 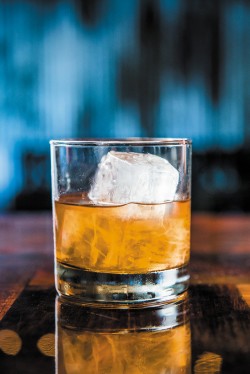 Barrel Proof
Open for a couple of years now in the building that once housed the Bridge Lounge, Barrel Proof is a die-hard whiskey bar created by LeBlanc + Smith hospitality group. Found on the corner of Magazine and Erato streets in the Lower Garden District, this corner bar is home to 272 (and counting) different kinds of whiskey from Bulliet and Jack Daniels to Yamazaki and Michael Collins. Barrel Proof also offers quite a decent beer selection and more than enough spirits, sodas and syrups to concoct the cocktail of your choice. Also, if you’re feeling a bit peckish, feel free to munch on cold fried chicken sandwiches, soft pretzels and more offered by Little Bird, a kitchen-installation created by chef Kristen Essig and Michael Stoltzfus that’s open Wednesday through Sunday night. 1201 Magazine St., (504) 299-1888, barrelproofnola.com

Oxalis and The Branch Bar
Located in the ever-popular Bywater neighborhood, Oxalis is “a restaurant with a whiskey-focus” open everyday on the corner of Dauphine and Louisa streets. With a tavern-like atmosphere inside and a lush, open courtyard, Oxalis features a casual environment with not-so-casual offerings. Go on a whiskey-laced journey through Buffalo Trace, Knob Creek, Tullamore Dew and Glenlivet, and, if you’re still standing, have some dinner! Chef Jonathan Lestingi’s menu is designed to pair with the scotch in your hand — dishes like tomato bruschetta, a jar of pickles and kimchi or fried lamb ribs with stone ground grits and Bourbon cane syrup. 3162 Dauphine St., (504) 267-4776, oxalisbywater.com

Dos Jefes Uptown Cigar Bar
For over 20 years, Shawn Stallard and Ritchie Shaner have been the creators and owners behind this uptown destination for lovers of choice wines and spirits, heady cigars and live local music. Dos Jefes is one of the last places in the city where it’s still legal to light up after last year’s smoking ban went into effect, so feel free to puff on one of their premium stogies, while sipping a well-aged scotch or two. Expect to hear live local music every night of the week, including performances by The George French Trio, The Panorama Jazz Band, Tom Hood and Wendell Brunious, The Iguanas, John Fohl and more. Though the bar itself doesn’t serve food, Taceaux Loceaux — a tantalizing Tex-Mex taco truck run by Alex and Maribeth del Castillo — is usually parked right out front. 5535 Tchoupitoulas St., (504) 891-8500, dosjefes.com

Kenton’s
Touted as an “American whiskey bar and restaurant,” this new Uptown eatery certainly retains a bit of East Coast flavor, featuring a similar menu to its sister restaurant Maysville on West 26th Street in New York. Featuring parquet floors, wrought iron lamps and a long, marble-topped bar, Kenton’s offers an amiable environment in which to sample over 150 different kinds of whiskey … but pace yourself, this place will hopefully be around for a while. Offered in one or two-ounce servings, their elaborate cache has everything from Charles Goodnight and Pure Kentucky to George Dickel, Sazerac and Lagavulin. The food menu, featuring grilled, smoked and charred dishes, which pair well with bourbon, is pretty darned good as well. 5757 Magazine St., (504) 891-1177, kentonsrestaurant.com