Growing up in a landlocked state like Illinois, Michael Nelson possessed an unusual taste for seafood. 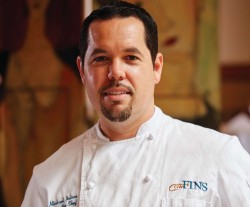 Perhaps it was the summers spent at his aunt’s house in Maine where he helped his neighbor pull lobster traps out of Bar Harbor or perhaps he simply enjoyed challenging his palate with a taste of the unknown, a trait seemingly uncommon to Midwest diners. “Growing up in Chicago, you really aren’t exposed to very good seafood,” Nelson admits. “But ever since I was a kid, when I’d go out to eat, I’d always order the fish.”

When speaking of the inspiration behind his desire to pursue the culinary arts, Nelson admits jokingly, “I have a couple of grandmothers that would like to take credit for that.” But when it comes down to it, he was hungry! He recalls coming home from school, hungry for a snack, and watching shows like The Frugal Gourmet or Great Chefs Great Cities.“I remember watching Great Chefs Great Cities, and, not only do I remember the techniques, I just remember watching these guys and the things that they did, and I remember saying to myself, ‘Boy, I would really like to do that one day.’”

After graduating high school, Nelson enrolled in community college to test the waters of academia. Although Nelson thought college was “the right thing to do,” his true passion was revealed while working at a steakhouse called Public Landing in Lockport, a town about an hour’s drive from Chicago. “I got really lucky,” Nelson says. “My first real cooking job, I got to work under a master chef.” Chef Robert Burcenski is co-owner of both Public Landing and Tallgrass, a tiny, high-end restaurant in the same city. While working at Public Landing, Nelson cut a deal with Burcenski to spend his off-hours in a sort of unpaid internship where Nelson could learn and work with the skilled staff at Tallgrass. “[Burcenski] was incredible, and, whether he knew it at the time or not, he was a big influence on me,” Nelson says.

Working with Burcenski at Tallgrass was like kismet for Nelson. After more than two years learning from a master, he packed up his car and drove to Napa Valley, Calif., to attend school at the Culinary Institute of America. After graduating, he honed his skills working in esteemed restaurants like The Georgian Restaurant at the Fairmont Olympic Hotel in Seattle and more casual, though immensely popular spots like 32nd Ward Seafood House in NOLA and Deleece in Chicago.

While visiting New Orleans on vacation, Nelson fell in love with the city. “There are so few places I’ve visited in my life where immediately I’d say, ‘I can live here,’” he says. “This was definitely one of those cities.” When his girlfriend in Chicago (now his wife) expressed an interest in pursuing her graduate degree at the University of New Orleans, Nelson was all in. “I put my application in, and, this is pretty amazing, GW Fins hired me before I even moved down here!” Nelson says.

It’s been 11 years since that fateful day, and Nelson is still cooking at the French Quarter’s premier fine dining seafood restaurant GW Fins. In fact, just last year, owner and chef Tenney Flynn promoted Nelson from chef de cuisine to Executive Chef. “I love it here,” Nelson says. “It’s just a perfect fit for me. There’s so much freedom with the menu, and, of course, being a seafood restaurant, the scope of food is just so vast.” Nelson is proud that the menu at GW Fins is constantly changing because the dishes are all based on the quality of seafood and produce brought into the restaurant each day.

Nelson’s boss Flynn is the Chairman of the Chef’s Council for the Audubon Institute’s G.U.L.F. Program, a nationally recognized sustainability program. Like Flynn, Nelson supports the use of Gulf seafood, in all its many varieties … including serving what most fisherman consider “trash fish,” which, in all honesty, is just as tasty as more popular species. “We’ll serve any fish here — I mean, you’d be amazed,” Nelson says. “When it comes to bycatch and things like that, GW Fins is on their speed dial.”

Lately, Nelson has gone a step further, shifting his focus laterally to discover new ways to use parts of the fish everyone else throws out. “I’ve had some pretty good success,” Nelson says. “There’s a dish that’s been on the menu for a few months now — I’m calling it Fin Wings.” Through much trial and error, Nelson discovered a way to utilize the meat around the collar and present it to customers in an appealing package. “I figured out a way to cut it so it’s just a fin sticking out with a long bone attached to it that runs through the center of the meat,” Nelson says. “When you cook it, we usually tempura fry it; it eats exactly like a chicken wing!” Time will only tell what culinary discoveries he’ll make next. gwfins.com

373
previous Tom Neyhart: Sunshine and Positive Energy
next Rising Above