Trinity Restaurant aims to stand the test of time. 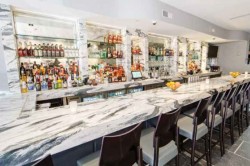 Before it closed last year, Maximo’s Italian Grill was a lower Decatur dining destination for almost three decades. It was a restaurant with a unique ambiance — an open kitchen where chefs would be chefs, and where everyone could see and hear (sometimes quite shockingly) how a high-end restaurant kitchen operated. It was a place that locals dropped in for drinks after work and visitors left with an indelible impression that never quite faded, one they shared with friends and family for years to come. For many, Maximo’s was an institution, not unlike Mandina’s, Clancy’s or other longtime, neighborhood restaurants in the city.

When local real estate developer Hugh Uhalt got a call from Vincent Marcello about purchasing the building, he simply couldn’t resist. “I knew it would be difficult down there, but I think it’s a worthwhile project,” Uhalt says. “That part of lower Decatur is in the process of turning around in a positive way, and I wanted to be a part of that.” Complete renovations of a building well over a century old turned out to be a major undertaking, eating up over $1 million in the process, but last month Trinity finally opened its doors.

While Uhalt intentionally kept the layout the same, there are quite a few stark differences from the dark, unpainted exposed brick, wood-beam interior that was there before. The long bar that once sat to the right of the entrance in the front room has not only become almost twice as large, but it has moved to the opposite wall and is now topped with heavy marble. The carpeting was replaced with slate tiles and ceramic flooring made to look like hardwood. Trinity features all new kitchen equipment and lighting fixtures, a new sound system, and even a stunning skylight … as Uhalt says, “The whole nine yards.” The smaller, second-floor dining room has the same sleek look. Three French doors lead to a spacious, completely rebuilt balcony overlooking Decatur Street.

Like many New Orleans restaurants, Trinity takes pride in exhibiting unique pieces from local artists. Uhalt commissioned a piece from David Harouni, a Persian artist who has enthralled the Crescent City with his huge human faces for the past 18 years. The restaurant also features a piece that came from the Slidell home of internationally renowned and locally beloved artist George Dunbar. “Both artists came in and actually hung the pieces themselves,” Uhalt says.

Local firm William Sonner Designs was tapped to remake the 6,000-square-foot space, but Uhalt offered quite a lot of input. “I already had an idea of what I wanted the restaurant to look like before I started,” he says. “I’d like to say I’m a pioneer, but I am just cleaning the place up and getting it right again.” In addition to a complete overhaul of the open kitchen, Uhalt added another kitchen in the back to ease some of the pressure out front, allowing the chefs a chance to interact with the diners sitting mere feet from the grill. “We put over 75 tons of AC in that place,” Uhalt admits. “It had to be done. You go down there with an open kitchen … there aren’t many places where you can actually sit so close to the chef.”

Executive Chef Michael Isolani, who formerly worked with John Harris at Lilette and Bouligny Tavern, is offering fare quite different from the restaurant’s previous incarnation. An eclectic mix of Creole, Italian, French and Vietnamese dishes dominate the menu from duck fat hush puppies and hogs head cheese to roast pork shank and Gulf Coast frutti di mare. Plans are in the works to extend the menu, perhaps even offering one or two of Maximo’s dishes as an homage. Trinity also expects to lengthen its hours to include lunch in the fall.

Uhalt expressed great satisfaction with the way Trinity came together, from the design and decor to the chefs and staff. When he agreed to take on this project, he planned to be in it for the long haul. “We did it right so that it’ll be an institution that has been revived and will exist for the next 50 to 100 years,” he says. “I believe Trinity Restaurant will be the most fun, the most lively and offer the best food in the city.” trinityrestaurantneworleans.com