Toni Tennille, the vivacious vocalist of Grammy Award-winning musical duo Captain and Tennille opens up about her music and her life. 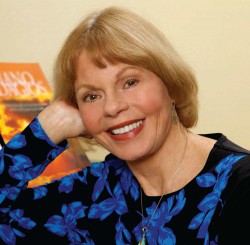 As the vivacious and dynamic singer and front woman of musical duo Captain and Tennille, Toni Tennille made an impressive mark on American pop history. Her phenomenal vocal styling and her effervescent, charming delivery, along with husband Daryl “The Captain” Dragon’s solid musicianship as a keyboard player and arranger, earned Captain and Tennille multiple gold and platinum awards for top hits such as “The Way That I Want to Touch You” and “Do That To Me One More Time,” both written by Tennille, “Shop Around,” “Muskrat Love” and “Love Will Keep Us Together,” which was the best-selling single in the United States in 1975 and won the Grammy Award for Record of the Year in 1976. Their sky-high popularity as the quintessentially happy musical couple helped land them their own television variety series on ABC from 1976 to 1977, and Tennille got her own syndicated television talk show in 1980. So in 2014 when Tennille announced she was divorcing Dragon after over 39 years of marriage, adoring fans were shocked. This year, Tennille released her honest, heartfelt personal story, Toni Tennille: A Memoir (Taylor Trade Publishing), which details her fascinating life, from her childhood in Montgomery, Alabama, to her thrilling ascent to fame on the pop landscape, and the surprising lows she endured in a lonely marriage to a man incapable of deep emotional love.

“I had no intention of ever writing a memoir, mainly because I hadn’t figured out what I was going to do in my life,” Tennille says. “We moved to Prescott, Arizona, around 2006 or 2007, and I realized I needed to make a change. I wanted to get away from Daryl because of his extreme negativity. I’m not blaming him; it had a lot to do with how he was raised, but he was dragging me down the same hole he’s been in forever. I still talk to him. I’ll say, ‘How are you?’ and he’ll say, ‘About a C minus’; that’s how he’s always been. All my sisters knew what was going on the whole time, and my sister Jane said, ‘Toni, you’re a joyful person and I feared you weren’t going to leave and you’d end up being a bitter old woman.’”

Although difficulty lurked behind the scenes between her and Dragon, a perfectionist and former backup musician for the Beach Boys who hailed from a musically profound yet difficult family, Tennille constantly radiated positivity and has no regrets from the years spent with him. “I believe all your life experiences, the good and the bad, make you the person that you are today, and I’m pretty happy,” says Tennille, a prolific songwriter whose life has revolved around her love of music. “I’ve made mistakes but learned from them. The music we made together and the creativity I experienced because of him was worth it. Daryl knew I wasn’t just a ‘chick singer’; he thought I was a great songwriter, musician and singer, and he wanted to make records of my music and that made me want to write and do more musically.”

In her memoir, Tennille managed to do some serious soul-bearing about her complicated union with Dragon and his often bizarre behavior, while simultaneously being empathetic toward her former husband. “I wanted to make sure Daryl wasn’t portrayed as a demon; he isn’t,” Tennille says. “He is a genius, but he’s tormented.” The big takeaway from Tennille’s book is that it’s never too late to extricate one’s self from a toxic relationship, even when that relationship seemed aspirational to much of the world.

“I just kept saying, ‘I can help fix this man; I have so much positive energy, love and joy,’” Tennille says. “‘I can bring him into this light.’ I spent the first few decades trying, hoping, thinking I could do that, and it finally dawned on me that I wasn’t able to help him. I knew many of our fans would be disappointed because they pictured us as this perfect couple, but the most interesting thing has been people thanking me for sharing my story. I’m glad I’ve touched a nerve and that the book has been so well received.” Even Dragon told Tennille he was proud of her after she promoted her book on the TODAY show. “It was the most positive thing he’s ever said to me, about me, in all our years together,” she says. “I was very touched by that.”

Although emotional intimacy was absent in her marriage, the beautiful, statuesque pop star — who experienced no shortage of male attention in her heyday — remained faithful to her husband. “Well, yeah, there were opportunities, but the truth is I never met any man that could hold up to Daryl,” says Tennille, who tried to connect with Dragon through her song lyrics. “He was the man I wanted; I couldn’t have him all the way, but he was brilliant and I made a vow that I’d never cheat. The cute thing is, as the years went by, Daryl and I hired younger musicians for our band who had watched us when they were adolescents and teenagers, and several of them admitted to me, ‘Oh my gosh, I was so in love with you!’ And I said, ‘Well now you know me!’ It’s a trip!”

Toni Tennille: A Memoir is richly and thoughtfully written, chock full of vivid descriptions that take readers on a nostalgic journey, and Tennille credits her co-author and niece, Caroline Tennille St. Clair, for the excellent writing. “We worked beautifully together; I’m good at telling the story, but Caroline has a gift with words and is a graceful writer,” Tennille says. Fans may remember six-year-old Tennille St. Clair asking for a parakeet from Santa as she sat on her aunt’s knee during a Christmas special on The Captain and Tennille Show, seen by millions each week. “Of course she got that parakeet,” says Tennille, who may write more books in the future with her talented niece. Tennille’s trademark warmth and charisma flows on each page; she brought that same Southern charm using her gorgeous voice to narrate her audio book for Audible, garnering an Earphones Award from AudioFile for her outstanding performance.

And there is no shortage of interesting stories, including Tennille’s compassionate take on the segregated South, where she was raised in a tight-knit family. Born to parents naturally talented themselves, Tennille, a classically trained pianist, and her three younger sisters thrived creatively and musically. Tennille’s father was a gifted musician who played in the Auburn Knights Orchestra, just as Tennille did during her college years at Auburn University, and sang big band in the Bob Crosby Orchestra. Her mother had her own daytime TV talk show, the first ever in Montgomery. “I am so grateful for the genes I got from my parents,” Tennille says. “Daddy would say, ‘Okay, wait until you hear this!’ and play us albums like Count Basie and Ella Fitzgerald. Mother was on live television for five years, five days a week on WSFA-TV. She was a natural at interviewing people and always made it fun and interesting. She gave me advice I used my entire life: “Toni, always be nice to your lighting man, ’cause he can make you look like an old hag that’s been on a bender for two weeks!” [Laughs]

Tennille shares plenty of showbiz tales, such as her and Dragon’s early days playing music together; Captain and Tennille getting their record deal; recording “Love Will Keep Us Together” with sisters Jane, Louisa and Melissa on background vocals; winning the Grammy Award; taping The Captain and Tennille Show and The Toni Tennille Show; the music industry craziness; her time as a solo artist and singing with big bands and symphonies; and her star turn in Victor/Victoria. Humorous moments include Captain and Tennille’s performance of “Muskrat Love” at a White House dinner honoring Queen Elizabeth II. “I always dedicate ‘Muskrat Love’ to Henry Kissinger!” Tennille says. Other cool stories showcase Tennille as the one and only “Beach Girl,” having played keys on the Beach Boys’ tour and her singing on Pink Floyd’s legendary concept album The Wall.

New Orleans was the location for a 1978 Captain and Tennille TV special for ABC. “Oh, it was fabulous,” Tennille says. “My parents had friends in New Orleans we’d visit when I was young. I remember the night-blooming jasmine thick in the air, and how absolutely magic and mysterious it was. I didn’t really understand what was going on in the French Quarter because of my age but I just loved New Orleans! I loved New Orleans music, and, in our New Orleans special, I adored the way we did the opening number, “Black Water.” I wore a beautiful antebellum dress and sang “Can’t Help Lovin’ That Man of Mine” at the Oak Alley Plantation. Hal Linden from Barney Miller was a Broadway song and dance man, and he played Dixieland clarinet on “Hello Central, Give Me Dr. Jazz.” And Daryl really admired Fats Domino and never expressed much animation about anything, but I could tell he was blown away playing with Fats in a Bourbon Street club! And we had a jazz funeral for Daryl’s hat. We went through the French Quarter and then out to throw Daryl’s hat in the river! It amazed me that some writer talked him into actually taking off his hat! But off it went into the Mississippi and God knows where it ended up!”

Today Tennille enjoys life in Lake Mary, Florida, living close to several family members, playing her music and spending time with her Australian Shepherds, sisters Bebop and Lula. “They were named after, [sings] “Be-Bop-A-Lula, she’s my baby … !” Tennille says. A dog lover all her life, the cover of Tennille’s memoir features her with Dragon and their cherished English Bulldogs Broderick and Elizabeth, who graced the album cover of Love Will Keep Us Together. “Dogs are definitely healers,” Tennille says.

As a Delta Society Pet Partners team along with her amazing Australian Shepherd Smoky, Tennille did therapy dog work for six years at Yavapai Regional Medical Center in Prescott. “Smoky was my therapy dog too; he helped me get through some emotional hurdles,” Tennille says. “He was beloved at the hospital, and he did so much good, and I was going to do work in Florida, but Smoky passed away, but Bebop and Lula aren’t quite as mellow!” If Tennille finds a dog with Smoky’s temperament, she’ll consider bringing joy to hospital patients again through her therapy work, just like the joy she’s spread all her life through her wondrous music. In the meantime, the kind, giving and gregarious chanteuse will serve as an honorary celebrity co-chair for the Louisiana SPCA’s Howling Success Patron Party and Gala 2016 Nov. 11 at the Hyatt Regency New Orleans, where this year’s theme celebrates Pop Culture. “The work the Louisiana SPCA has done and is doing on behalf of homeless dogs, cats and other animals is remarkable and so badly needed,” Tennille says. tonitennille.net