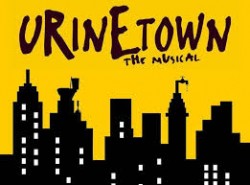 Unfettered access to toilets might seem like a fundamental right, but not here. Welcome to Urinetown, where a decades-long drought has led to a government ban on private toilets, the founding of a public-toilet system run by an evil profiteer, and a dystopian climate where accommodating a basic human need becomes a revolutionary act.

“It’s a hilarious show,” says John Collins, president of The Company and director of the show. “There’s no political side they take or specific political message they’re trying to make — they don’t take sides on these issues. But it’s enough to make you think, while you’re laughing hysterically.”

Urinetown closes the 2015-2016 season for The Company, which puts on three shows per year along with smaller projects.The nonprofit theater troupe, formed two years ago to revive community theater in St. Bernard Parish post-Katrina, keeps ticket prices set at $10 as part of a mission to make theater more accessible to all audiences. The group annually dedicates a show to support a local cause and runs a theater-arts education program, The Drama Llamas, open to children ages 7-14. The Drama Llamas are sponsored by a grant through the Kiwanis Club of St. Bernard. thecompanystb.com

With fantastical landscapes, formed by light reflecting off gilded glass, Bosnian-New Orleanian artist Lala Raš?i?’s latest show transforms millions of Tweets into a magical environment. This spectacle of light and gold and glass, on exhibition until July 3 at Good Children Gallery (4037 St. Claude Ave.), combines Raš?i?’s love of literature and typography with a sign-making technique that involves adhering gold leaf to glass, creating the effect of golden mirrors.

Raš?i? says the show reflects a transition in her work, a move away from heavily scripted videos and performances, often starring herself, and a shift toward installations that use more visual elements to generate an atmosphere.

Text has played a major part in the exhibition, both in the final creation and in the process. Raš?i? teamed with Marko Plahuta of Slovenia, whose data-visualization work has won awards, to collect millions of Tweets involving words with the prefixes “pro-,” “anti-” or “neo-“. From those Tweets, the two compiled a list of hundreds of words, analyzing the Tweets’ origins to look for patterns. Raš?i? then translated this concrete data into an abstracted analog environment.

“I don’t want to communicate any specific message other than this message of beauty,” Raš?i? says. The project draws inspiration from the visual poetry movement of the 1950s and ’60s and New Tendencies, the Croatian computer-art movement of the 1960s.

“Bit International [arts journal] says contemporary art is not about the form as much as the methods,” Raš?i? says. “I like that — because the July show will be a beautiful, seductive installation but created through the whole scientific-math process.”

The July 3 closing includes a performance by Raš?i? and will likely feature a spoken-word artist who in April was set to help create a sound component for the exhibition by giving rhythm to Plahuta’s data.

Audiences can also check out Raš?i?’s work during a July 14 presentation of her book, Lala’s Reader, at The Stacks (900 Camp St.). Raš?i? describes her reader as a combination catalogue, art-book and mid-career retrospective. lalarascic.com

Mixed Media – The Front showcases a variety of work by New Orleans artists.

Innovative mixes of media are on display this month and next at The Front (4100 St. Claude Ave.), including exhibitions up July 9-Aug. 7 that feature artists Vanessa Centeno and Madeleine Wieand, among others.

Centeno’s paintings, which often involve sculptural components, tend to use cheerful acrylic colors, glaringly synthetic materials and other elements to mimic the allure of commodities and examine human connections with things. Centeno’s playful spirit shows through her art, giving the pieces a friendly, almost goofy feel — but the work also holds a seriousness that gradually sinks in.

The whimsical-looking work focuses on how people become attached to objects and feel sympathy for objects; how objects become tangible representations of the intangible; and how some objects gain higher values than others.

“I think of my painting as the embodiment of these struggles and relationships,” Centeno says. “I want people to encounter something that’s a little strange yet comforting at the same time.”

Meanwhile, Wieand’s work tends to explore “the relationship between person and place, architecture, city as temple and setting of infinite histories.”
Wieand says she plans to use photographs of her surroundings, mainly public spaces in New Orleans, likely incorporating fabric and wood to create mixed media focused on “visual memories and histories.”

In August, the gallery exhibits work by a different set of artists, including HEKS/SMUK, a two-part show by Ryn Wilson and Michael Arcos. These shows run Aug. 13-Sept. 4.

According to Wilson, HEKS would likely use collage, photo and video installations to consider how the unknown “creates fear for those in power, especially in the religious realm.” SMUK is an “Instagram Doom Wave” video triptych viewed through photon-rejuvenation masks. “The installation gives the viewer a chance to act as voyeur to the humor, sadness, fear, pain, love, lust, obsession, addiction and confusion expressed in one man’s Instagram account,” Wilson says.

Wilson, who sometimes creates synth soundtracks for her videos, also collaborated with Arcos to record a limited-edition cassette tape in conjunction with the show. nolafront.org

223
previous Destination Dining
next Home Away from Home