Home IN THIS ISSUE Return of the Big Man
IN THIS ISSUE
SPORTS
June 30, 2016 Paul Wegmann 0

Return of the Big Man 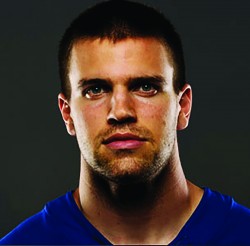 The days of wine and roses seem to have indeed been short for the Saints in recent years as three of four seasons have ended in 7-9 results. Frequent enthusiasm has given way to disappointment and chagrin as key components in the Saints’ rosters of yore have graduated to retirement or other locales. And so as the Saints again reload moving into the 2016 season, the question arises how they can replace the weaponry they have lost so that the memory of recent winning seasons does not fade but instead can be relived anew. Into that void between what has been and what can be have stepped new players like Brandin Cooks, Willie Snead and Michael Thomas. However a key aspect of every Sean Payton coached team in New Orleans, dating to 2006, has been an effective tight end. The first hint of what was to come occurred in 2008 when the tandem of Jeremy Shockey and Billy Miller combined for 95 catches and over 1,000 yards receiving. Every season after that, the Saints’ tight ends have had at least 90 receptions — and Jimmy Graham and Benjamin Watson proved at times to be super-human. However most recently, like Graham before him, Watson himself has moved on (to Baltimore) potentially leaving a very large hole in the Saints’ offense.

However, it did not take the Saints long to find a means to exploit this regularly crucial aspect of their offense as they immediately reached into the free agent market to sign Coby Fleener, formerly of the Indianapolis Colts. Fleener is a former second-round draft pick out of Stanford, and, at 6-feet-6-inches and 250 pounds, his lanky frame may look familiar to Saints fans who recall Graham’s long striding down the Superdome turf. In four seasons in Indianapolis, Fleener was a favorite of not just the fans but also his star starting quarterback, Andrew Luck, who often looked to Fleener in times of need.

On one occasion just last year in a game versus the Saints, with the Colts down and finding no success, Luck finally connected with Fleener on a key big play for 27 yards, which got the Colts back in the game and nearly helped lead them to a comeback despite steep odds. That bond with his quarterback is a natural plus for any receiver who plays with Drew Brees, as Fleener will this year, as Brees accentuates and thrives on the innate connections between himself and his colleagues. Over the last three seasons, on average Luck targeted Fleener over 80 times and connected for over 50 catches per season. There are few quarterbacks in the league who can match Luck’s sheer productivity, but Brees, who regularly has a chance at throwing for 5,000 yards, is certainly one of the few. Obviously Payton’s offense was a big draw to someone of Fleener’s receiving skill set, but Brees’ superb accuracy and profuseness on the field were a big attraction as well, as Fleener himself stated not long after signing that, while “there were a few other teams” who were courting him, “once the Saints popped into it, and obviously I couldn’t tell them this, but obviously that was really exciting for me. The way they use the tight end, having an outstanding quarterback in Drew Brees, to me, it’s a no-brainer.”

One factor for Fleener’s success on the field will be the amount of time he shares with the Saints’ two other stalwart tight ends, Josh Hill and Michael Hoomanawanui. In Indianapolis, he was often in a shared game time playing arrangement including Dwayne Allen, but, here in New Orleans, Fleener should be a primary focus of the offense. While Hill and Hoomanawanui each have their own gifts, Fleener brings a field stretching ability and athleticism not seen much since Graham left. After acquiring Fleener, Payton offered high praise indeed, stating, “He’s got outstanding speed, so the one thing that jumps off the film is his ability to really run. He’s a guy that’s smart. He’s someone who played in a system very similar to ours in college. Watching his skill set, I think for us as coaches, it’s exciting because I see a number of ways where he’s going to be able to help us in the passing game.”

Fleener’s speed, measured at 4:52 at the combine’s 40-yard dash when he first left college, should offer the Saints a chance to do something that they haven’t done in a while, which is flood the field with multiple receivers. And with that comes big plays as defenses make mistakes, especially in coverage. Payton himself has repeatedly shown his ability to draw up mismatches brilliantly (consider the end to the 2011 playoff game where Jimmy Graham broke free for a 66-yard touchdown catch, knocking over smaller defenders along the way), but ultimately the players themselves must accomplish the task at hand. Fleener has repeatedly shown his ability to do this in his playing career, and it appears that Saints fans will see the perfect fit at the tight end position for the Saints offense once again — and that may be enough to get them back to the playoffs.

105
previous Home Away from Home
next The Refinery: The Sweetness of Downtown Living