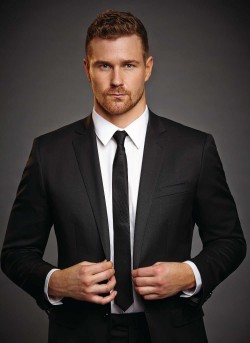 Actor Josh Kelly made a welcome return to Season 2 of Lifetime’s award-winning, superbly scripted drama UnREAL, one of the hottest and most provocative series of the summer. A titillating and addictive fictional feast served up by co-creators Marti Noxon and Sarah Gertrude Shapiro, UnREAL focuses on the production of hit reality show Everlasting, a dating competition rife with behind-the-scenes turmoil where manipulating supervising producer Rachel Goldberg (played by Shiri Appleby) elicits essential outrageous contestant footage from the female contestants, commanded by impassive executive producer Quinn King (played by Constance Zimmer). Kelly is back in his role as Everlasting’s cameraman who was eventually promoted to director of photography and Rachel’s ex-boyfriend Jeremy Caner, who publicly dumped and humiliated Rachel in the surprising Season 1 finale of UnREAL. Season 2 of UnREAL premiered June 6 and concludes on Aug. 8.

UnREAL is a stand-out series thanks to its clever take on the plethora of reality shows bombarding television today, and it has amassed an impressive array of critical acclaim and awards, including an American Film Institute Top 10 TV Show Award, a Critic’s Choice Television Award for Most Exciting New Series and a Peabody Award; it also gets a 98 percent approval rating by Rotten Tomatoes. Due to its magnificent run, Season 3 of UnREAL was announced right before Season 2 aired and will probably debut in the summer of 2017. And UnREAL has affected the way viewers approach reality shows, including Kelly himself. “I think it was necessary,” he says. “There are lots of parodies of reality shows out there, but UnREAL is the first show about people making a reality show, and it’s such a big part of our culture that I think it was inevitable. I enjoy watching reality shows more now because it adds another layer of entertainment. I think it can help people enjoy reality television more.”

Interestingly, UnREAL features two female leads. “I like being on a female-driven show,” Kelly says. “I’ve always thought girls are way more powerful than men; they’ve always been able to make me do whatever they wanted so I think it makes sense.” [Laughs]

Timely themes have dominated Season 2 of UnREAL, including African Americans in entertainment thanks to the casting of black suitor Darius to woo the contestants on Everlasting, and also mental health, due the constant manipulation, shocking behavior and stooping for ratings widespread throughout the show. “The truth of the matter is that most of the big dating shows like The Bachelor have never had a black suitor, and most of the time the African American contestants on those shows don’t make it to the end and that’s a little ridiculous this day and age, and we wanted to bring it up,” Kelly says. “I feel like the mental health issue will be a consistent theme because you know these people are insane doing all these things to other people! [Laughs] There has got to be something wrong with them.”

Kelly enjoys playing Jeremy, especially given that his character has experienced transformation in Season 2 of UnREAL. “I was excited they added more emotional depth to him,” says Kelly of Jeremy, who now has vindictive motivation toward Rachel due to his inability to find closure with her. Their on-again, off-again relationship has been mainly directed by Rachel, and has included low points such as Rachel cheating on Jeremy in Season 1 with Adam, the wealthy British playboy and previous suitor on Everlasting. “I’m kind of heartbroken; Rachel embarrassed me and she hurt me in Season 1,” Kelly says. “Their relationship has always been on her terms. I don’t think Jeremy really knows what he is doing; he’s lashing out, and I think things are going to blow up in his face by the season’s end.” Kelly drew inspiration for Jeremy from his sixth-grade self after a girl named Nancy broke up with him and he retaliated by showing up to school looking disheveled in sweatpants and not talking to anyone to make her feel sorry for him. “It’s how I figured Jeremy was acting; instead of dealing with it rationally, I threw a pity party and wanted everyone to feel bad for me.” [Laughs]

Kelly’s performance in UnREAL has been dubbed his breakthrough role. “I would say it’s because UnREAL is a very respected new show, so I think it brought attention to me in ways that other ones hadn’t,” Kelly says. But before UnREAL, the handsome actor’s role as Cutter Wentworth on ABC’s Emmy Award-winning daytime series One Life to Live put him on the entertainment map. “One Life to Live was a big stepping stone; I learned a whole lot, and I got to play a fun kind of a bad guy. It was a good experience. It was a lot of fun and I miss it in many ways, because the performance in soaps is the closest you can get in film and television to doing theater; you just rehearse it and then do it, and you have very few takes, so as an actor, you get to really own your performance. It can’t be manipulated the way other performances can by editors and directors.” Other television credits of Kelly’s include Army Wives, True Blood, Dollhouse and Ben and Kate, and he’s acted in feature films such as Zero Dark Thirty, Jarhead 2: Field of Fire, Transformers: Revenge of the Fallen and Transformers: Dark of the Moon.

Born in Yokosuka, Japan, where his father was stationed, while serving in the United States Navy, Kelly always remained involved in theater as he traveled the globe with his family. “In many ways my love of acting was developed through all the traveling, because it was my way to kind of prove myself and show off at the new school,” Kelly says. “I enjoyed doing theater and drama classes; I used to do impressions and voices and stuff, so performing was my way of trying to be accepted.”

Kelly embraced his unique experience as an Army Ranger and being a part of an elite group of specially trained soldiers in the United States Army; he completed three tours of duty in Afghanistan and one in Iraq. “I needed to grow up, and becoming an Army Ranger was really good for me maturing-wise,” Kelly says. “I knew I was only going to do the military for a short time, and I wanted to push myself to do the hardest thing I could do and have the full experience. Getting to be in the military and actually deploy made me see the value of entertainment and how important it was for us when we had free time to watch movies. It allowed me to believe in what I really wanted to do, which was to act. I don’t think I’d have been happy doing something unless I believed in its purpose.” After the Army, Kelly moved to Los Angeles to pursue acting. His Army Ranger experience no doubt attracted directors and producers to him for certain roles. “The bits I had in the Transformers movies were because I was in the military. Michael [Bay] wanted a group of special operations guys that looked good on camera to surround Josh [Duhamel] and Tyrese [Gibson]; it’s like having on-set military advisors as well.”

Cope, a short film about two special operations soldiers who are afflicted with post-traumatic stress disorder after returning from war, was written, produced and directed by Kelly, who also starred in it. “Another Army Ranger and me thought about what we were the subject matter experts on and pooled our resources and made it,” Kelly says. “He was personally struggling with pretty severe PTSD. I didn’t realize at the time that I had any issues, but, in making the project, I realized that you can’t be unaffected by going to war. It was a great project and I learned a whole lot in making it, but it never really got released, but last year I got to act in a really good short film called Prisoner of War that was released that is along the same vein and also made by a Ranger. It went to some festivals and won some awards at the South Dakota Film Festival.”

Kelly pays tribute to his military background by advocating for the Wounded Warrior Project, a charitable organization addressing the needs of veterans and service members who received physical or mental wounds in conjunction with their service in the military on or after Sept. 11, 2001 and their families through programs, events and services. “They’re a good company,” Kelly says. “They had some struggles for a while but they’ve been trying to fix them and they seem like they do a lot of good.” Kelly also supports the work of Gallant Few, which strives to connect new veterans with hometown veteran mentors to promote successful transitions from military service back to healthy civilian life in order to thwart veteran isolation, which can lead to issues such as veteran unemployment, homelessness and suicide. “They are another good charity I believe in, and they helped with funding for Prisoner of War.”

Kelly visited a friend in Alaska this summer and enjoyed all the marvels of nature that the majestic state has to offer. “Alaska was great; I did some whitewater rafting,” Kelly says. “It was fascinating because it was the solstice so I was there on the longest day of the year when it stays bright the whole day; it’s really weird, they have a midnight minor league baseball game.” He also recently stayed in Vancouver. “I worked on writing a screenplay and just tried to chill out. I got out and paddle boarded on the water pretty regularly too.”

Visiting New Orleans again is on Kelly’s wish list. “I need to get back to New Orleans!” he says. “I shot a movie in Baton Rouge a long time ago; the movie was never released but it was a fun experience being down there in the South and getting to see New Orleans. I just loved the spirit, and how everyone just wants to have fun. I like fried food too so New Orleans was awesome. I didn’t get to see as much music and architecture as I would have liked to — because I had to get back to the project in Baton Rouge — so next time I’m there I’d like to hang out with some locals who can tell me what to do.”