Andrus Peat emerges as the Saints’ next great offensive lineman. 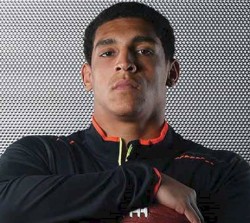 The offensive line is the heart and soul of every football team. It is the bedrock of what happens on every play. The Saints once had a line that rivaled any in the National Football League — anchors like Carl Nicks, Jahri Evans and Brian de la Puente were considered among the best in the league at what they did — but the offensive line today is nearly unrecognizable from the names that wore treads into the Superdome carpet over several years. Today the names are becoming more familiar, not just in the city of New Orleans but across the league — at center, Max Unger; at left tackle, Terron Armstead; and at right tackle, the steady Zach Strief — will be expected to plow the way for Mark Ingram and create a pocket for Drew Brees yet again. But in 2016 still another new name should emerge — that of Andrus Peat, who should be sliding in at right guard.

Peat is a natural tackle, and specifically at a towering six-foot-seven-inches, 316 pounds, he was viewed and drafted as a left tackle when he was made a first round draft pick (with the thirteenth selection) from Stanford just last year. The Saints drafted Peat even though tackle was not an immediate or obvious need, especially considering the fact that Armstead had become a premier player in the league at left tackle. Meanwhile, at right guard, long time regular Jahri Evans seemed to have considerable more time before him in a Saints uniform. However, in this current offseason like many others, surprises do happen. And this year, Evans was among the number departing the team. Evans certainly ranks as one of the Saint’s all-time best players, and with six Pro bowls and four All-Pro awards to his credit, he may very well be the greatest guard who has ever played for the team. Thus his leadership and ability will be sorely missed, yet thankfully the Saints had the prescience to look ahead to the future when Peat fell to them in the 2015 draft. Now, in 2016, having spent a year developing his skills as an NFL road grader, the Saints seem intent on ensuring that Peat gets on the field regularly as one of their five best linemen.

While right tackle seemed like the most immediate position he might challenge for, the Saints allowed veteran stalwart Strief to remain there throughout the 2015 campaign. During the season, there were indications the Saints had contemplated using Peat at guard all along, and, in week 11, he finally got a chance at substantial playing time versus the Houston Texans, as he filled in on the left side for Tim Lelito. In one of the most intriguing match ups of the year, Peat often faced off versus a genuine NFL star, J.J. Watt, and though he at times struggled, Peat essentially held his own. Peat stayed at left guard until week 14, when he switched to right tackle versus the Jacksonville Jaguars. However, during the year, Peat also gained valuable experience at the left tackle position as the Saints had to compensate for a spate of injuries along the line. All in all, Peat tallied seven starts on the year at three different positions. As head coach Sean Payton said, at the end of last season, “The challenge for Andrus is, and I’ve said this before, he’s a tackle. He gets in there, and there are the nuances of playing guard that are a little different. Of course, in your rookie year, all of this happening can be a bit overwhelming, and yet you see his improvement. Getting him on the field and getting him the experience [was important].”

Peat had additional hurdles to overcome in 2015, primarily the fact that he arrived relatively late for the initial stages of the offseason conditioning and training programs due to his college’s rigorous academic standards, but also the fact that the grueling travel requirements of competing in the NFL’s combine and various other pre-draft tryouts had left Peat somewhat under-conditioned. However in 2016, Peat is facing neither of those things, and he has made terrific strides toward making an impact on the forthcoming season, but, as was recently explained by Payton, he gained valuable experience in the course of last season: “He finished strong last season. Obviously, he played at a few different spots a year ago. He is in great shape, and I think that is going to serve him well as we are in these practices and as we move into training camp. Certainly, we see him starting. Whether it’s at right guard or right tackle, we’ve got some time and some flexibility with regard to that. I’m encouraged with how he’s progressing.”

In 2016, the Saints appear set to move forward with an exciting new star in Andrus Peat. His large, potentially dominating frame should help create holes for the run game, while giving Brees time to find his targets. Hopefully, the Saints are beginning another tradition of having one of the league’s strongest and most stable lines for years to come.

124
previous Banding Together
next Arts: August 2016