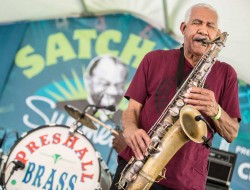 With this year’s move to Jackson Square, Satchmo SummerFest, the annual celebration of the life and music of Louis “Satchmo” Armstrong, gains more ground to grow. The venue shift is a major change, but otherwise the festival remains the same, offering a three-day tribute to Armstrong in what’s billed as the only New Orleans festival dedicated solely to traditional jazz.

Set for Aug. 5-7, Satchmo SummerFest presented by Chevron includes a music lineup spread between two stages; a symposium packed with panel discussions and special recordings of Armstrong; and various food vendors. A ticketed Aug. 4 kickoff features a classic Armstrong film and a reception at the Omni Royal Orleans hotel.

Festival organizers say they moved Satchmo SummerFest from the Old U.S. Mint, where the event has been held since its inception in 2001, to Jackson Square to give the increasingly popular fest space to expand. According to organizers, the 2014 fest drew more than 57,000 attendees, with much of the party spilling over into the streets.

Along with creating more room for live-music crowds, the change more than doubles the seating capacity for Satchmo Symposium events. The symposium, a major part of the festival, will be held this year in Le Petit Theatre du Vieux Carre, which boasts 325 seats.

This year, participants include Armstrong’s photographer and renowned Armstrong collector Jack Bradley, Armstrong record producer George Avakian and jazz historian Dan Morgenstern, among others. Jazz vocalist Catherine Russell, who grew up around Satchmo because her father played in his band, makes her symposium debut this year. “She’s the younger generation of the living history,” Schramm says. Admission is $5. fqfi.org/satchmo

Mercy not Sacrifice: A New Orleans minister pens a new book that offers a new way to look at Christianity.

The Rev. Morgan Guyton had heard the biblical verse, “I desire mercy not sacrifice,” twice within a short period, but it took the angry shouts of a homeless man to drive the message home.
While at a church camp, Guyton was instructed to rouse the man, asleep on the sidewalk in front of the church, and ask him to move. The man responded with “Where’s your [expletive] mercy, man?”

“It was like being directly addressed by God,” says Guyton, who now serves as co-director of the NOLA Wesley United Methodist Campus Center.

The incident, which occurred eight years ago, became the catalyst for Guyton’s book, How Jesus Saves the World From Us: 12 Antidotes for Toxic Christianity ($16, Westminster John Knox Press).

The book, released earlier this year, draws from Guyton’s varied experiences with the church, in particular a transformative point in 2002 when he returned to his faith after a period of wandering. During a rough patch, Guyton, who had grown up in an evangelical home, stumbled upon a Methodist church in his neighborhood and was surprised to find a largely LGBTQ congregation.

“It was just one of the gentlest, most gracious spaces I’d ever been a part of,” he says.
The congregation studied Henri Nouwen’s Life of the Beloved, which changed Guyton’s paradigm of Christian salvation.

Now, Guyton hopes to offer “an alternative understanding of what we need to be saved from.” The book suggests that many Christians need saving from a toxic understanding of salvation and offers antidotes through exploring contrasts like “Worship not Performance,” “Communion not Correctness” and “Mercy not Sacrifice.”

“I’m hoping it can become a resource for spiritual growth — for people that have encountered a toxic version of Christianity, for them to be able to see a version that doesn’t suck,” Guyton says. Catch Guyton at his book appearance (Maple Street Book Shop, 7523 Maple St.) Aug. 24 at 6 p.m. patheos.com/blogs/mercynotsacrifice

Graffiti has traditionally been seen as criminal nuisance, not art, which means its history, especially in New Orleans, must be patch worked together from interviews, memories and dusty storage bins. The resulting exhibition, dubbed the first-ever graffiti krewe retrospective in the South, offers a rare peek at an art form known for its secrecy.

TOP MOB: A History of New Orleans Graffiti, which runs through Nov. 6, includes a narrative timeline featuring hundreds of photos from the 1980s to the present, along with fresh art from local writers and a sprawling mural on the Ogden Museum’s exterior.

To tell the story of New Orleans street art, guest curators Nicole Hershey and Gabriel aleXander follow the experiences of TOP MOB, the city’s first graffiti krewe, established in 1984. According to curators, its founder, BUGS, and others, took inspiration from artists in cities like New York, Los Angeles, Miami and Atlanta to create a style unique to New Orleans.

“The original New Orleans style is legible letterforms that flow together with a funky ease,” says aleXander, who has work in the show.

Visitors can also learn how technology has affected street art and how public perception of graffiti has changed; stories on the timeline go from courtrooms and fines to commissioned pieces and celebrated exhibitions. An example: new pieces by TOP MOB members, hung in ornate wooden frames.

However, transferring street art to museum walls presented a challenge. “Graffiti artists aren’t used to creating on a small scale or within the confines of a frame,” aleXander says. “I think it is interesting to see how each artist approached presenting themselves within that framework.”

Though parts of this underground culture are rising above the surface, graffiti maintains an air of secrecy and remains largely misunderstood. According to a written statement at the exhibition, even with framed work on museum walls, graffiti writers face another challenge in convincing viewers that their art “has a complexity and depth that makes it worthy of examination and respect.” ogdenmuseum.org