Dr. Steven Udvarhelyi is advocating change as the new CEO of Blue Cross and Blue Shield of Louisiana. 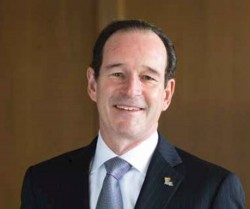 For Steven Udvarhelyi, M.D., the path following his internal medicine fellowship at Harvard Medical School has been a diverse one. Nonetheless, taking a seat in the head office as the new CEO of Blue Cross and Blue Shield of Louisiana, Dr. Udvarhelyi is finding himself in familiar territory.

His focus on patients, and his passion for healing and healthcare remain. “It’s why I became a physician in the first place,” he says.

The decision to depart from clinical medicine to an executive role on the payor side of the industry resulted from his desire to make an even bigger impact for even more patients. He wanted to understand what drives and changes the healthcare system. “I came to see that a person’s health was subject to many factors beyond what happens when a patient and doctor interact,” he says.

And instead of a practice of personal patients, he now likes to say he has more than 1.6 million patients — all of the Blue Cross and Blue Shield members.

Like any new position, there is much to learn, but Dr. Udvarhelyi has quickly picked up on several aspects of healthcare in Louisiana. “First, the overall health of our state is not great,” he says. “We rank near the bottom on a number of measures and have a high prevalence of chronic conditions such as obesity, diabetes, hypertension and heart disease. On the positive side, I think we have physicians, hospitals and other providers who want to change this. So does Dr. Gee, our Secretary of Health, as do we at Blue Cross and Blue Shield of Louisiana.”

However, he says, in order for the change to happen, there has to be a change in the way care is delivered and paid for. “We need to move away from the traditional fee for volume mentality and reward providers for better care, better outcomes and better service.”

He also says that to achieve better outcomes, insurance administrators can back up physicians’ proactive and preventive care by encouraging patients to engage in changing behaviors through an increase in incentives and payment models.

If Dr. Udvarhelyi’s past experience is any indication, he has the proficiency and know-how to help affect change in our state. He started his insurance career as a vice president for medical services with Prudential in 1991, and, in the past 20 years with Independence Blue Cross in Philadelphia, he was credited with making a significant impact on reducing administrative, medical and pharmacy cost trends — in some areas by as much as 25 percent.

That being said, he’s all too aware of healthcare limitations in the United States. “Our healthcare system works well for some and not for others,” he says. “We certainly do provide access to some of the best technology and treatments in the world. But we spend more per capita on healthcare than any other nation in the word, by a large margin — almost two to one — and our citizens are not healthier on average. That has to change.”

In Dr. Udvarhelyi’s view, the Affordable Care Act, while intended to expand access, is actually driving healthcare costs and premiums up due to the limited number of healthy people purchasing it. While he’s not optimistic that the upcoming presidential election will have the power to break the gridlock in Washington, Dr. Udvarhelyi continues to advocate cost innovation to change the way care is delivered to make it more convenient, more affordable and to produce better outcomes.

For their part, the teams at Blue Cross and Blue Shield of Louisiana make it their mission to endure in improving the health and lives of Louisiana residents. “My company is connected across the entire healthcare system, trying to coordinate the care they receive,” Dr. Udvarhelyi says. “We take our mission seriously, knowing we are in the perfect position to be a catalyst for positive change at this important time in healthcare.”
Dr. Steven Udvarhelyi: At-a-Glance

On communicating core values: “I like to promote a ‘lead by example’ mentality. Values can’t be words on a page — they need to be demonstrated in actions.”

On moving to Louisiana: Much of his education and career has been East Coast-based, but Dr. Udvarhelyi says in some ways he feels like he has come back home. “I grew up in Baltimore, Maryland — a place known for crabs, oysters and other seafood — as well as for hot, humid summers,” he says. “Everyone here has been tremendously welcoming to me and my family. We are glad to be calling Baton Rouge and Southern Louisiana our home.”

On his greatest inspiration: “My wife is stronger than me in so many ways and has carried the real burden of raising our family and keeping us all together, while I pursued my career. She never complains, and she is always supportive. If not for her love and support, this move could never have happened.”