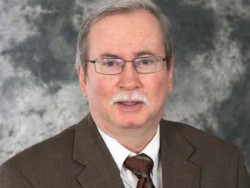 Dr. James McKinnie is humble. He wants to talk about his skilled physician partners, his amazing office staff and his world-class mentor Dr. Masood Akhtar. He wants to set up an interview with some of his patients — like the pilot who almost lost his job — so they can share the challenges of their cardiac conditions and how their lives have been improved with treatment.

Despite being one of only a small number of electrophysiologists in the state and being considered one of the best cardiologists in the South, Dr. McKinnie doesn’t really want to talk about himself.

So September being Atrial Fibrillation Awareness Month, he focuses on that. It’s an important part of his job as a cardiologist who specializes in heart rhythm disturbances to educate patients on this common and challenging condition.

Atrial Fibrillation, or AFib, is an irregular heartbeat, usually rapid, in the upper chambers of the heart. It is a malfunction of the heart’s electrical system — the most common cardiac arrhythmia — and it causes blood to stagnate and clot. Dr. McKinnie says the biggest concern is stroke risk. A third of all patients experience AFib before their stroke.

“The AFib symptoms can range across a whole gamut of not being aware of the condition at all to bringing a patient to his knees and nobody knows why,” Dr. McKinnie says. “Patients compare the sensation to drum rolls, a fish flopping in their chest, flutters or maybe just a mild fatigue and shortness of breath.”

A full quarter of adults over age 80 develop at least one AFib episode in their lifetime; many will be chronic. High blood pressure, obesity, sleep apnea and stress exacerbate the condition. Caffeine, alcohol (especially binge drinking) and nasal decongestants are also tied to AFib.

“Identification and early onset treatment is key,” Dr. McKinnie says. Heart rhythm medications are only successful in about half of all cases and sometimes create risks. Non-drug therapies are a big development in his field and Dr. McKinnie has performed cardiac catheter ablation in more than 1,500 cases now. And with his most persistent cases, his practice at East Jefferson Hospital is finding excellent success with a hybrid surgical approach.

Collaborating with cardiovascular surgeon Dr. Mike Brothers, Dr. McKinnie and his partner, Dr. Zhen Jiao, are the only team in the city to perform the hybrid convergent procedure. Dr. Brothers cauterizes tissue at the back of the heart and Drs. McKinnie and Jiao thread flexible catheters to the problematic tissue and either freeze or burn it to interrupt the faulty areas responsible for the dysrhythmia.

“Our unique approach comes from combining the best aspects of arrhythmia surgery and pulmonary vein isolation approaches in one operating room,” Dr. McKinnie says. “Our success against longstanding AFib is over 80 percent.”

Among other therapeutic methods, McKinnie’s practice also implants pacemakers and defibrillators. They are currently training on the Watchman device, which is a special implant to prevent clots that will open up new avenues for patients who can’t take blood thinners.

Surgery isn’t the end of the line for personalized patient care. Dr. McKinnie’s practice offers the only AFib support group in the region and both physicians attend. “Sometimes the news we hit them with, they kind of freeze … the support group setting helps patients open up,” he says. “We put a lot of personal time in to that, and it brings a unique educational aspect to our patients. It’s something we give back to them. I’m extremely proud of that.” The sessions are archived on the practice website for patients who cannot make the meetings.

Dr. McKinnie is fellowship trained under the world-renowned Dr. Masood Akhtar at the University of Wisconsin, who he says, “Inspired me to do world-class work every day.” His wife encouraged him to move their family south again, and he spent years at Tulane University and Louisiana State University before more recently joining forces with East Jefferson.

It’s hard to believe that once upon a time, Dr. McKinnie thought he wanted to be a chemical engineer. Then he took a summer job as an orderly on West Jefferson’s Cardiac Care Unit where the heart monitors captured his fascination, propelling him to medical school and beyond. Now — even though he’s been practicing medicine for 34 years — he can’t imagine any other life.