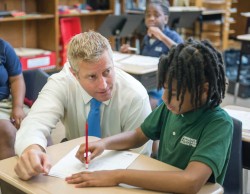 Kleban, the founder and president of New Orleans College Prep (NOCP), shares these statistics: Before Hurricane Katrina, 60 percent of schools were failing (that number is now just 6 percent); high school graduation and college enrollment rates are both up over 20 percent.

“The strength of the educational programs in our open enrollment schools is higher than ever,” Kleban says. “Some people are stuck in the mindset that public schools aren’t high quality, and, if you want high quality, you have to go to a private or magnet school. I don’t think people’s perception has caught up with reality. It comes down to seeing is believing.”

Kleban believes. He grew up in a two-parent, middle-class household with a good public school system and a lot of opportunity ahead of him. His understood at a very early age that a lot of kids didn’t have the same lucky lottery ticket that he had. Working for Boeing out of college, he felt unfulfilled and left to become a high school math teacher in a Philadelphia inner-city school.

The experience, which he cites as “the hardest job I’ve ever had,” gave him a supreme appreciation for the tremendous responsibility of teachers. It was an eye-opener on the realities and disparities of public education in our country. “That experience really sealed my conviction to want to start and grow schools that would meet the needs of all children, especially the disadvantaged,” he says.

After graduating Harvard Business School, he won a fellowship to start a charter school in New York. But the writing was in the stars, because, as Hurricane Katrina decimated New Orleans, New York reached a cap on charter schools. With one prospect lost, another was found. “I was incredibly compelled by the need here,” he says. “It was an opportunity like never before to start over and build up the school system by focusing on children.”

Ten years and four schools later, NOCP has created a Pre-K through 12th grade college prep path with one-on-one college counseling, college visits, and alumni support to and through college. These concepts have given NOCP graduates a college persistence rate of 20 percent over the national average in which only 1 in 10 low-income students graduate in six years. The success created a spin-off non-profit—College Bridge New Orleans—whose board Kleban chairs to partner with colleges and to provide students direct coaching and micro-grants for unmet financial needs.

Kleban says the other big NOCP difference is in socio-emotional support for students. Teachers build relationships with children and their families to promote emotional intelligence and academic success. To stay responsive to each student’s individual needs, discipline is based less in punitive than positive support, cutting suspension rates in half. Focus on social and character skills boosts students’ success for school and life.

“At any preschool, let alone those as robust as our programs, $5,250 a year is a real deal,” Kleban says. “Parents who get to know our teachers and the impact we have on our kids see things differently for their child’s early learning experience.” By fall 2017, the Head Start program will grow into a socioeconomically diverse early learning center for more than 200 children ages 0-4, half of them tuition-based.

Most importantly, NOCP is hiring a school psychiatrist for mental health support in all of its schools and potentially other area schools as well. While Kleban’s focus is on the kids at his schools, his big-picture mindset is always on the city as a whole.

“New Orleans College Prep is just playing its part in a much broader vision for what this city’s school system can be…” he says, “…a bright future for every single child, a great public school in every neighborhood, that every parent regardless of race or class can look at their local school and think of it as the best educational choice for their child. It’s not going to happen overnight, but we won’t be satisfied until we get to that point.”

535
previous Josh Kelly Gives a Realistic Spin on Reality Shows Through the UnReal
next Michael Naquin: Excitement on Tap