Michael Naquin, founder and brewmaster at 40 Arpent Brewing Co., wouldn’t be surprised if he were the only hairdresser on the planet who switched careers to become a beer brewer. 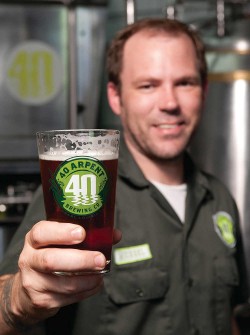 Just like his friends were a little shocked years earlier when he went from working in refrigeration to owning his own salon. Come to find out, each field incorporates art and science, and all three have a lot more in common than you would think. Hair and brewing are both craft work, and the science of making beer consists of heating it up and then cooling it down — that’s refrigeration.

Though his stress levels are skyrocketing with all he has in his beer stein right now, he feels he’s finally where he belongs. “I am so much happier with what I am doing,” Naquin says. “It’s a happy stress. Though I’m less financially secure, there’s always something different to tackle — and I kind of enjoy that.”

His latest project has been an extreme undertaking of planning, building and finally this summer opening a five-days-per-week tap room attached to his two-year-old, 6,000-square-foot production brewery in Arabi along the Mississippi. 40 Arpent recently received a generous grant from a special project through the Meraux Foundation called Startup St. Bernard. Naquin was singled out for his plans to attract tourists to the riverfront for sunset views, recreation, food trucks and brewery tours.

He’s excited about the tap room’s capacity for expanding the number of regulars at his facility. “That’s what makes the biggest difference — that face-to-face time that you get with people,” he says. “You form a much stronger bond with these people, and they take ownership of the brewery. The experience is what makes it.” Until now, he’s relied on free Friday brewery tours and tastings, a Fourth of July Street Party and Oktoberfest to build business.

The brewery name is a nod to Houma-born Naquin’s memories of trolling and knee-boarding on the 40 Arpent Canal. An arpent is a French unit of land measurement — slightly smaller than an acre — that was originally used by the French to divide property along a waterway. St. Bernard Parish’s 40 Arpent Canal, which was built in the 18th century, is in close proximity to the brewery, and, since several of the more obvious bayou-type names were already taken, it was a natural fit.

He can’t pick a favorite because that would be like choosing a favorite child, but whatever is most recent is probably what he’s drinking today. He says his lager is underrated; his stout is good no matter the mood; and his Oktoberfest is tops because it’s the best time of year (thanks to fall, football and his birthday). “Okay. Okay. The Oktoberfest is probably my favorite,” he admits. “If people don’t drink my beer because they don’t like me, that’s one thing — that’s okay. But if they don’t drink it because they don’t like it, I want to talk more about that. I make good beer. I know that, because, if I didn’t, I wouldn’t still be open.”

As you can see, Naquin isn’t exactly known for mild mannered shyness, but get him talking about shopping local, and the fire under his brew kettle really flares. “I think drinking local and eating local has never been more important … if someone walks in and picks up a beer by New Belgium Brewing (the United States’ third largest craft brewer out of Colorado) at the grocery store, they’re directly taking money out of our local economy,” Naquin says. “You’re only as wealthy as your community. That’s why it’s not a good idea to shop at Walmart. Guess what y’all? We don’t live in Arkansas! When we talk about making New Orleans the city we want it to be, one of the most important parts is that we have to buy from each other.” 6809 N. Peters St., Arabi, (504) 444-3972, 40arpentbrewery.com