Queen of Burlesque: A revealing local festival offers a peek into the world of parody performance. 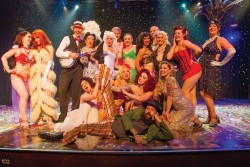 Burlesque performers from around the world gather in New Orleans this month to showcase all the artful ways to dance out of a costume. The New Orleans Burlesque Festival runs Sept. 15-18, offering visitors and locals a diverse series of carefully curated shows in venues like the House of Blues New Orleans and Harrah’s New Orleans Hotel and Casino.

Along with glimpses of various burlesque styles, the annual event gives crowds a chance to watch dancers compete for the title of Queen of Burlesque. The contest, a favorite part of the fest, moves to The Civic Theatre this year to increase seating.

“Every year, our Queen of Burlesque competition sells out,” says festival founder Rick Delaup. “We should be able to accommodate everyone who wants to go this year.”

According to Delaup, although the competition expands to a larger venue, the overall festival remains a decidedly small, selective affair with a focus on quality over quantity. “It has a very good reputation worldwide,” he says.

The fest packs plenty of variety into events like Mondo Burlesque, which highlights international styles. The fest’s opening night includes a radical switch from the classic, elegant glamour of the Queen of Burlesque competition to the raucous, high-energy throw down known as “Bad Girls of Burlesque.”

The fest also includes parties and impromptu sightings of burlesque stars as they soak up the French Quarter. Crowds might spot Bourbon Street legend Rita Alexander, “The Champagne Girl,” who annually comes in from Las Vegas for the fest, Delaup says. This means crowds can enjoy longtime stars alongside their newer counterparts.

Fests featuring New Orleans-themed documentaries and Latin American films are on tap for September at The Broad Theater. The four-screen theater, which opened in March, has already established itself as a cozy hub for those in search of entertainment via film fests, indie flicks, Louisiana-made movies and special showtimes for families.

“I think everyone has been really enjoying it, really appreciative that we’re here,” says owner Brian Knighten.
Taking cues from the now-closed Movie Pitchers theater, Knighten opened The Broad Theater in a unique setting: an airy Spanish Colonial building that originated in the 1920s as a plumbing and heating business, and has since housed a boat shop and a boxing gym.

The theater, at 636 N. Broad St., includes a full bar with cocktails, wine, beer on tap and happy-hour specials. Pop-up kitchens typically set up outside on weekends.

Like Movie Pitchers, The Broad Theater hosts eclectic events, from live comedy that incorporates movie clips to private parties to screenings of films still in the editing process. As for the big screen, the theater aims to offer more options for family friendly fun.

The Broad Theater shows some mainstream Hollywood hits, such as Captain America: Civil War, but Knighten said he’s been surprised at how independent and foreign films, such as the animated Japanese cult classic Belladonna of Sadness, can be the bigger draw.

The theater not only attracts audiences from nearby neighborhoods, but has cultivated regulars from Metairie and the North Shore who want to see a range of movies at a locally owned, independent theater, Knighten says.

“Some people want to see art films,” he says. “I think New Orleans has a lot of culture, and the folks are into that.”

Among this month’s offerings are The True Orleans Film Festival, set for Sept. 9-11, and a Latin American film fest set for Sept. 23-25. thebroadtheater.com

The word “anarchitecture” can sound unruly and disruptive, but the art movement by that name inspired harmony, helping to build relationships among artists and artwork separated by time, distance and American social structures.

This month, the concept of anarchitecture helps bring together 40 years of the Contemporary Arts Center in New Orleans.

“A Building With A View”: Experiments in Anarchitecture runs through Oct. 1 at the CAC, celebrating themes prevalent when the arts center opened — themes that remain quite relevant in post-Katrina New Orleans and connect local artists with their peers across the country, according to exhibit curator Andrea Andersson.

Anarchitecture has tied into local culture since the start: the word was coined by artist Gordon Matta-Clark and a group of New York artists that included Southeast Louisiana natives. The term describes a way of thinking that encouraged an “interdisciplinary spirit” that resulted in community arts centers such as New Orleans’ CAC.

The CAC itself, housed in former offices and warehouses, demonstrates the ideals of anarchitecture through its creative reuse of space. The exhibition’s interdisciplinary approach and exploration of the ties between physical space and social structure echo ideas that seem foundational to the CAC, says Andersson, who earlier this year began working with the CAC as The Helis Foundation Chief Curator of Visual Arts.

These themes — especially those of urbanization, gentrification, displacement and transition — resound in modern-day New Orleans, she says.

For this open-call exhibition, which annually features local artists, Andersson expanded the definition of “local artist” to include artists whose work is “deeply engaged with this city,” such as those who have spent significant time in New Orleans via artist residencies and artists in more rural areas of Southeast Louisiana.

“It’s really a very complicated portrait of a place undergoing a transition,” Andersson says. “The idea of what it means to be a New Orleanian is part of the transition the city is undergoing.” cac.org