Mark Berger, co-owner of higherpower Cycle|Yoga|TRX, helps you get your sweat on! 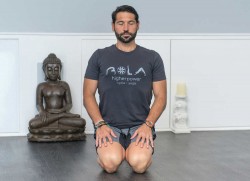 For fitness guru Mark Berger, a native New Orleanian who grew up in Lakeview and Mid-City, it was for the love of an all-around comprehensive boutique fitness studio that he decided to open higherpower Cycle|Yoga|TRX. After working as a bartender in college, followed by marketing and public relations for Anheuser Busch, he decided to leave the party lifestyle to work on his athletic goals. “I learned that my place in life was to make the world a healthier and happier place,” he says. “After being a competitive runner and triathlete, my muscles and joints were hurting, so I found yoga and TRX, which complemented those disciplines.”

Along with a couple of business partners, Berger opened the Mid-City studio (514 City Park Ave.) in Nov. 2014. The new downtown studio (1000 Girod St.) opened this past June. “There was a lack for a studio that mixed fun with performance, and I knew that we could bring it to underserved areas of NOLA,” Berger says. “I would like to open the third [location] in Baton Rouge in 2017.”

Both studios offer a mix of cycling, TX and yoga classes. “Cycling is a fun and challenging cardio workout; TRX is interval strength training; and yoga is the glue that holds all physical, intentional and powerful things together to make higherpower the studio that gives you the full mind/body experience,” Berger says. “Our space is not only inviting and beautiful, but we create a community where are all are welcome. Having three different disciplines, will give you something for everybody. Our teachers are very knowledgeable, and we have unique fusion classes that you will not find anywhere close to Louisiana.”

Berger says his own personal fitness and diet routine is all about balance. “I workout at least six to seven times a week but mix indoor and outdoor cycling, yoga, TRX functional fitness classes, and run 25 to 60 miles a week depending on what I’m training for,” he says. “One of the reasons that I workout is to be able to have the delicious food we have in New Orleans on occasion and a few beers along the way.”

And when it comes to finding happiness, Berger does so by making a positive difference in other people’s lives. “I get to see people smile; make people sweat; and then give them a hug at the end,” he says. “The community that we have built is like no other in New Orleans.” (504) 302-7497, higherpowernola.com
ON STAYING MOTIVATED

“We workout for a few reasons: to live longer; to be able to eat what we want and not feel guilty (on occasion); and to look better aesthetically,” Berger says. “I also find it so much fun. To be able to share the passion of fitness or reach goals with a group of people can give you a high like no other.”

“I stay pretty healthy eating mainly fruits and veggies, lean proteins and healthy fats, and a small amount of whole grains and starches,” Berger says. “I love potatoes and sweet potatoes for my extra fuel. I eat Quest Bars or homemade egg muffins when I am on the go. My guilty pleasures are beer and cheese fries.”

“I trained Alan Faneca, who was an offensive lineman for the Pittsburgh Steelers,” Berger says. “He was a nine-time Pro-Bowler and Super Bowl champ and weighed 320 pounds when he played. He asked me to train him for a marathon. He had lost 110 pounds and trained harder than anyone I have ever trained, not only on the road, but in the gym, and he ran a sub four-hour marathon at the Rock ’n’ Roll Marathon in New Orleans. I got to pace him during this event and push him at times when he thought he had no more. He beat Puff Daddy’s time …”

“Explore the realm of fitness, and find out what you like the most,” Berger says. “Educate yourself; don’t overdo it and get burnt out; and find a mix of things that will help change it up. If you are not having fun, then it will not be something that you stick with. Grab a friend or two; keep each other motivated; and set realistic goals that you can attain. Always remember that you can be the best version of you and that comparing yourself to others is not the best way to go about it.”