The Jenneman family has joined forces to fight cancer. 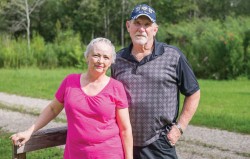 Tara manages the fundraising. Melissa and Amanda are the goodwill ambassadors. Leslie and Dakota are medically trained, so they do a lot of the research. And then there’s Mom and Dad—Fred and Christal. They’re the patients.

As if battling multiple myeloma (Fred) and breast cancer (Christal) wasn’t enough to manage, Fred also survived a widow-maker heart attack believed to be caused by his chemotherapy medication. Add cardiology and cardiac rehabilitation appointments to an already booked schedule of post-surgical, post-stem-cell-transplant, daily radiation and weekly chemo appointments for both … it all adds up to a lot of medical care and expense.

Daughter Tara lays bare the hurdles the family is facing. Her mom’s short-term disability ended. She has been told her Social Security payments (which she filed for to receive early at age 63) will be ending at the end of the month. She was denied Medicaid so they are paying $375 a week to cover her insurance. After two years of researching and filing with the Veteran’s Administration to have Fred’s cancer designated a result of agent orange exposure in Vietnam, they are still no closer to a solution.

Neither of her parents — who have been working all their adult lives — have been able to work this year.
In private, Christal confesses to Tara that after everything they’ve been through and now another financial hit, she doesn’t know how much more she can take. “I tell her ‘Well then say that, Mom. You don’t have to be motivational all the time.’ I see the fear in her face,” Tara says.

But that isn’t a side of Christal you’ll ever get to see.

Every morning she is up early and moving, trying to get things done around the house. She knows her energy is going to flag around noon so she races the clock to try to bring order to an out-of-control situation. Tara and her siblings encourage her parents to take it easy.

“Them working like that is their way of telling cancer ‘You’re not going to beat me,’” Tara says. “Us telling them to stop is our way of saying, ‘I don’t want you to make it worse. I don’t want to lose you.’” A lot goes unsaid in the family’s quest to be positive. “We try not to go to that dark place,” Tara adds.

The family’s biggest source of inspiration has been the love of family, friends and sometimes, perfect strangers. They’ve received meals, gift cards, monetary donations and an unbelievable number of correspondences. When her mom was in the hospital after her double mastectomy, the cards, photos and positive messages kept them all smiling.

“The outreach is so overwhelming,” Tara says. “It reminds you that with so much horrific going on in the world, there’s still a lot of good. It gives you faith in knowing that there are still good people out there making a difference in other people’s lives. Will they ever know how thankful we are that they helped us? Will they ever truly know how much it means to us, how it keeps us going and inspires us?”

Her dad especially is humbled by it. And despite their situation, he continues to give back in small ways. Tara found him at the kitchen table before Christmas writing out $5 donations to Toys for Tots, the Wounded Warrior fund and an animal rescue he supports. He told Tara his biggest challenge with this cancer is that he can’t give blood and platelets every six weeks like he used to.

“Things like this don’t happen without you wondering why,” Tara saya. “It’s hard not to go to that angry or sad place because that’s the easiest place to go. But the irony behind this is so strange — and for myself and my siblings we have to believe there has to be something more to it … something greater in the universe.”

Maybe it’s meant to bring the family together? Bring her brother to studying for a career as a doctor or her to a career as a motivational speaker? Bring comfort to others who are suffering?

“Our parents have been really good about raising us to see the good in things,” Tara says.

They even find things to joke about, like cancer awareness ribbons. “We’re pretty aware, thank you,” she says. They’re planning for the future too. Brother Dakota’s December wedding is near the end of Christal’s chemo and they want to celebrate — in a huge way.

“I don’t know what’s going to come of this situation,” Tara says, “but I have to believe something is going to work out, that it’s going to get better and that we’re going to get help because I can’t think any other way.”

Until then, the Jennemans are in this fight together. gofundme.com/afamilycancerfight