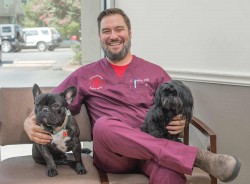 “It’s a much needed service for Uptown,” says Dr. Charlton, veterinarian, and director, owner and operator of the clinic. “Right now there are no after-hours, weekend or holiday emergency vet services in this area.”

The clinic is open from 5 p.m. to 7 a.m., with discharge by 8 a.m. Dr. Charlton says that night time can be the most active time for animals, making their likelihood of getting hurt and their need for veterinarian care more acute. People often haven’t seen their pets all day so it’s a time to walk and play.

Following urgent care and stabilization at PVHES, Dr. Charlton says he and his staff will send pets back to their regular vets or possibly refer them to vet specialists the following morning.

Dr. Charlton has hired four vets and six ICU treatment techs, all with emergency experience. “We’re not just hiring to have warm bodies here,” he says. “We need a staff with quick-thinking, emergency room mentality; who know how to prioritize and how to triage. We’re hitting the ground running.” Support staff in kennel and reception round out the new team.

Dr. Charlton has a long-standing relationship with Prytania Vet Hospital. It has been a part of the neighborhood for 23 years. His parents have been bringing their pets to Prytania since the beginning. He worked there as a vet tech in preparation for vet school at LSU and came back to Prytania as a vet after an internship at Animal Medical Hospital in Charlotte, N.C. He and the owners started talking about the addition of the emergency care to the daytime vet clinic as far back as 2007. That conversation became a reality after Dr. Charlton did some additional emergency and critical care training at Garden State Veterinary Specialists in New Jersey and Animal Medical Center in Manhattan.

What sounds like a straightforward path to Dr. Charlton’s end goal was anything but. After graduating from the University of Georgia with a degree in psychology, he joined some friends in New Zealand for what was to be a short summer break. “An amazing few months turned into a year and a half,” he says. He spent more than six years as a bartender and snowboarder, moving to Colorado to check out the Aspen scene.

Back in Louisiana with the realization that “a real job” might be in order, he quickly learned that restaurant work outside a ski town wasn’t all it was cracked up to be. He began to explore several career options and a spark was ignited during a conversation with a friend’s wife, a recent vet school grad. “I was able to go and observe one of her surgeries, and it was like a lightbulb going on for me,” he says. “It was my first real exposure to veterinary medicine, but I finally saw something I could really sink my teeth into and enjoy as a career.”

He was one of the oldest in his vet-school class, but he wouldn’t trade the lead up. “It was a great route because it’s made me a better vet,” Dr. Charlton says. “The world experiences and life experiences really translate to talking to people … about hard things, about medical problems and critical care issues … to really put it in a way they can understand it.”

Not to mention his lessons in the value of hard work came in handy when he spent the entirety of Memorial Day weekend covered in sawdust helping Simon Renovations prepare Prytania Vet for its Emergency Room setting. With the support of the daytime practice manager, he’s also been handling all of the payroll, protocol set-up and supply stocking.

Dr. Charlton’s mission and focus will be on quality of life for both his staff and his patients. As such, the clinic is max-staffed for more flexible working hours. And for pets, the clinic offers all of the cutting-edge urgent care options that owners have come to expect and want for their pets.

“Technology that used to only be available at vet schools is now standard,” Dr. Charlton says. “Oxygen kennels, IV fluids, in-house blood work and analyzers … the standard of care has gone up exponentially.” He believes the boon is fueled by the transition of backyard pet to cherished children and says some get as good if not better care than human family members.

“I truly believe that in recent times, maybe the last 10 to 15 years, people have made their pets more like family members, especially small animals in urban areas,” Dr. Charlton says. “We have better medicine; pets are living longer; and people enjoy the companionship.”

1.82K
previous A Family Cancer Fight
next Reagan Sidney: The Grass is Greener