Reagan Sidney: The Grass is Greener

One morning, eight years ago, Reagan Sidney woke up and decided it was the perfect day to completely change her life. 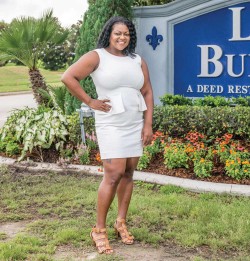 She had a master’s degree in higher education and student affairs, and she was working as the assistant director of residential life at Loyola University, but that wasn’t her true purpose for coming to New Orleans. So that day — she still remembers the date, March 3 — she quit her job and focused on building her event planning company.

“I came here to start a business,” she says. “I had been working in Baltimore when Katrina hit and I said, ‘I want to go, and I want to rebuild … but I don’t want to do what I’ve always done. I want to give to the tax base and build businesses.’”

Since that fateful wake-up call, she has also dabbled in club promoting, political consulting and personal assisting. Until she met Garden Doctors founder, Nathanael Scales.

At first she was just making phone calls to help Scales collect overdue contracts. One month and $40,000 later, there was no mistaking she’d made herself quite useful. Seven years later, she’s proven her merit. The company — now doing more than $1 million in contracts every year — boasts an office administrator, a marketing/sales manager and a full-time landscape architect. One van and a three-man crew has morphed into a staff of dozens with five work vehicles from New Orleans to Baton Rouge.

“We have whole families working with us,” she says. “That’s the piece that I love. We’re changing people’s lives here.”

Sidney learned quickly that landscaping was a lot like event planning. “People don’t need the services — they want them,” she says. “So the customer service has to be extraordinary.”

“Every day we have to add something or someone to the process so we don’t have drop off and can still offer the great service our customers are used to,” Sidney says. “The customers who have been with us since the beginning don’t care that we’re growing … they love us because when they call, we answer.”

Now, as the chief operations officer, Sidney oversees diverse accounts from large corporations and institutions down to the cherished residential contracts and the 200 blighted city lots the company upkeeps.

Garden Doctors was just awarded the contracts for Motiva Shell Refinery and Tulane Hospital and also won the bid to replace the grass after construction on St. Charles Avenue. Company representatives have their sights set on a major Fortune 500 corporation contract as well as the new World Trade Center. Sidney put out three other mammoth bids recently and is exhausted but excited.

“This is a calling,” she says. “I love to develop people and things and money … and let’s be clear, there’s good money in grass right now and we’re out here to get it.”

But that isn’t all Garden Doctors is out to do. The company gives back too. Sidney’s latest brainstorm is a prison re-entry program to help the recently paroled build skills and put their prison-earned licenses to work.

“As a black woman, I can’t continue to take from this earth and not give back,” she says. “I wasn’t raised to just be here on this earth. You’ve got to give to it too.”

She grew up in Ann Arbor, Michigan, but her parents are both from New Orleans, and her extended family is woven into the local fabric. Both of her businesses are State and Local Disadvantaged Business Enterprise certified and she advocates for diversity and black business owners.

“I’ve always been bossy and I like to run things,” she says. “Our next market plan is to push out to Dallas, and, if that means I’m living there Monday through Wednesday, that’s okay. I don’t have kids, so this is my baby.” In business and in life, she says, “We can’t stagnate; we have to continue to grow.” (504) 818-2626, gardendoctors.net
Reagan Sidney: Three Steps to Business Success
Step One: Have a savings account. “Nobody ever tells you that you’re not going to make money. And for the first two years, you’re not.”

Step Two: Sell yourself. “Look at every opportunity, everything you do as a business moment. Have your business cards, sell yourself … you’ve got to always work for it.”

Step Three: Just do it. “Whatever you’re dreaming about, if you find you can’t not do it, then you have to do it.”

Bonus Step: Have a faith walk. “You’ve got to trust and believe that He’s going to deliver on what He promised.”