Honoring the Winners of the 2016 Downtown NOLA Awards

Speaker Bill Masterton will head the ceremony for the five finalists who have renewed and enriched the Downtown New Orleans neighborhood. 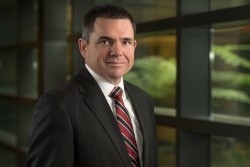 The Downtown Development District created the Downtown NOLA Awards in an effort to show appreciation for the people, businesses and organizations who have made great strides in the ongoing transformation, enrichment and success of Downtown New Orleans. For 2016, the DDD will celebrate the five finalists during a luncheon awards ceremony held at the JW Marriott on Canal Street Sept. 16, featuring keynote speaker Bill Masterton.

President and Chief Executive Officer of University Medical Center New Orleans, Masterton holds a bachelor’s degree in accounting and a master’s degree in business administration from the University of Southern Florida. With more than two decades of experience in the healthcare industry, Masterton has served as CEO of Piedmont Medical Center and CEO of Coastal Carolina Hospital in South Carolina. He also was Chief Operating Officer and Chief Financial Officer of Atlanta Medical Center in Georgia. Masterton joins us Sept. 16 to pay tribute to this year’s President Award recipients Mike Thomas, the 2016 Clean Team Member of the Year; Jarren Abron, the Public Safety Ranger of the Year; John Wild, NOPD Detail Officer of the Year; and the Downtown NOLA Award winners. The honorees are as follows:

Brenda Canada, New Orleans Business Alliance
As Vice President of Retail Attraction, Development and Strategy of the New Orleans Business Alliance, Brenda Canada has been instrumental in the growth of city-wide retail development. However, she is being honored specifically for her role in attracting new, national retail chains to the Downtown area. Additionally, Canada also played a large part in the development of The Outlet Collection at Riverwalk, the first metropolitan outlet mall in the country.

Chris Reade, LookFar
President and founder of New Orleans-based idea acceleration company LookFar, Chris Reade created a successful Downtown technology business that offers competitive pricing on custom applications and software for burgeoning New Orleans entrepreneurs. Reade relocated his business from New Jersey shortly before Hurricane Katrina, and, over the years, he has directed and morphed the company — keeping pace with a changing industry — into one of the city’s leading technology companies.

The Orpheum Theater
The glorious Beaux Arts theater built in 1918 stood empty and broken since Hurricane Katrina, but, in 2015, the Orpheum was restored and re-opened retaining all of its former majesty. The space that once played host to silent films and vaudeville acts now offers everything from timeless performances by the Louisiana Philharmonic Orchestra and classic films to concerts featuring both national and local musicians.

298
previous One Hot Commodity
next Reviving a Legend: Pontchartrain Hotel