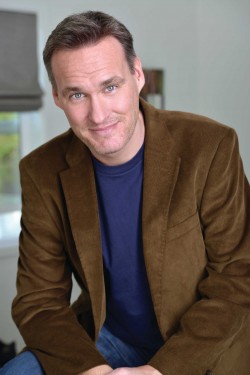 Jon Donahue spent much of his childhood immersed in watching movies — living and breathing all things Hollywood. Now the film aficionado has parlayed his passion into a dream career, working as an actor in blockbuster films alongside some of Hollywood’s biggest names. On Oct. 28, Donahue will be seen on the big screen in the Sony film Inferno, based on the 2013 mystery thriller by The New York Times best-selling author Dan Brown. This is the third film, along with The Da Vinci Code and Angels & Demons in the Robert Langdon series, which stars Tom Hanks and Felicity Jones and is directed by Ron Howard.

Donahue couldn’t be more thrilled and honored to have acted in the highly anticipated film.
“It’s so exciting to be a part of Inferno, and I can’t wait for the world to see it,” Donahue says. “It’s a different story than the other two films, because, in Inferno, Robert Langdon has a head wound and doesn’t have all his faculties. Tom Hanks reprises his role as Langdon and he’s trying to recall what happened and it’s a race against time because there’s a plague that’s gonna be unleashed in the world. What’s cool about this movie is that it asks the question of the audience: Would you annihilate half the population to save the population because the world is over-populated? As a movie-goer, it’s introspective; what would you do? Would you pull the switch? It’s not so cut and dry, so you’ll have to watch the movie and find out what the answer is!”

A handsome guy who exudes a dynamic personality and a witty sense of humor, Donahue plays Richard Savage in Inferno. “The fans will be like, ‘Who’s this guy?’” Donahue says. “The character wasn’t in the book. He was created to be Dr. Elizabeth Sinskey’s aide; they work for the World Health Organization. Dr. Sinskey [Sidse Babett Knudsen] and I are chasing after Langdon and Dr. Sienna Brooks [Felicity Jones]. The whole movie is a fascinating chase, and there are many twists and turns in the film; it moves at a breakneck pace. And playing a badass is cool; I’m not wielding a gun or anything, but I’m kind of down to business because I have to be. I do lots of comedic things and hopefully I’ll get to do more characters like this.”

For Donahue, a self-proclaimed movie nerd, being directed by Ron Howard was an amazing experience. “It’s so cool,” Donahue says. “Ron is just the sweetest, coolest guy. He really knows how to talk to actors, and how to explain something succinctly, and he’s got patience. One of my all-time favorite movies is Cocoon, which Ron directed in his late 20s. Between takes on Inferno, when it was appropriate, I’d ask, ‘Ron, tell me more Cocoon stories!’ He’s a funny guy with a wealth of stories, and I’m still pinching myself that this happened.”

Donahue often collaborates with acclaimed actor Tom Hanks, and, in addition to Inferno, they worked together on the Oscar nominated film Bridge of Spies. “I got to work with directors Steven Spielberg and Ron Howard almost back to back, thanks to Tom Hanks — that man is amazing and so gracious, and I love working as an actor with him,” says Donahue, who played Agent Faye in Bridge of Spies. “We shot the scene in Poland at Checkpoint Charlie, and watching Spielberg line up those shots — oh, the man is a machine! I saw Jaws and Raiders of the Lost Ark when I was 10 years old, and those films made me fall in love with movies.”

Recently, Donahue was featured in an episode of the Showtime original series Roadies from Cameron Crowe. “It was fun doing comedy as a pilot in a cockpit with these guys who looked and sounded just like Lynyrd Skynyrd,” Donahue says. And it’s Donahue’s unbridled enthusiasm for movies and his dedication to his craft that has no doubt helped him prove himself again and again as an actor. “It’s a love of filmmaking, perseverance and getting comfortable in an audition room and just doing it that works for me,” he says. “And all I know are movies; I’ve loved movies since I was a kid. I grew up in Binghamton, New York, and there wasn’t much to do. My parents didn’t have a ton of money and got separated, so my dad would pick me up on the weekend and take me to the movies. My grandmother took me to see Gremlins; my dad took me to the drive-in to see Porky’s; they took me to see everything and I turned out okay!”

Donahue loved movies so much that he got a job at a movie theater the day he turned 16 and ran a movie theater at age 18. He then worked at Universal Studios in Florida as a skipper at the Jaws Ride. “Every day I’d save hundreds of tourists from a man-eating shark with my 40 mm grenade launcher,” Donahue says. Later he got a role as a gakmeister and host at Nickelodeon Studios. “I made slime and gak and entertained tourists,” he says. He moved back home to New York and became an entertainment news reporter for a local CBS News affiliate. He wrote and reported his own stories and interviewed actors such as Gregory Hines and Jon Stewart. He then took the leap and moved to Los Angeles to try his hand at acting, studying under acting coach Dee Wallace Stone.

Donahue’s first big break came with being cast in Charlie Wilson’s War, which earned him his first Screen Actors Guild contract in a major motion picture. “I remember driving down Highland Avenue,” Donahue says. “I played Charlie’s Party Guest No. 3, and, in my rearview mirror, was the Hollywood Sign in The Hills and I thought, ‘Man, I’ve made it — I’m going to Paramount Studios to do a movie with director Mike Nichols, who was a wonderful man, and Tom Hanks and Julia Roberts and Philip Seymour Hoffman. It wasn’t a huge part, but, for an actor just getting his chops, it was great.”

Another big acting opportunity for Donahue was landing a part on the show Men of a Certain Age. “Ray Romano and Mike Royce from Everybody Loves Raymond gave me a shot and I’ll never forget that,” Donahue says. “Ray had this character in mind for me named Mike Dokich, the guidance counselor for Ray’s son on the show. I had given Ray’s assistant my reel of student films and shorts, and he came to me and said [in Romano’s voice], ‘You can act, you can act,’ and he got an audition for me on a Friday and on Monday, and he says, ‘You got it — you’re in.’”

Donahue does spot on impressions of Romano, Owen Wilson and others and has worked as a voice actor as well. “I get lots of people that say, ‘You were Antonio in Beverly Hills Chihuahua 2?’” says Donahue, who voiced Antonio, the German Shepherd for the animated film. “To be a character in a Disney film was awesome. And I’ve got a brand new nephew who can’t get enough of it! My niece always sends me pictures of him watching Chihuahua in front of the TV!” Donahue also did voice work with actress Catherine O’Hara for Tim Burton’s Frankenweenie. “Working with Catherine O’Hara — are you kidding me! That was amazing!”

Donahue collects movie posters and is a fan of movie memorabilia. He started the movie website Beyond the Marquee with buddy Steve Czarnecki. “I’d interview Bob Gale about Back to the Future props and Stephen Dane who created the Ecto-1for Ghostbusters and Drew Struzan, who illustrated some of the most iconic movie posters ever, like Raiders of the Lost Arc and Star Wars,” Donahue says. “As a kid, I’d go to all the local movie theaters in Binghamton getting posters to the point where — I didn’t find this out until I worked at the theater — they used to call me the poster child! I don’t know if I should still be offended by that to this day! But I love the art; it inspires me in this town that’s full of rejection and competition. I come home and look at it and say, ‘Hey, this is why I’m out here.’ It’s motivation.”

Halloween is Donahue’s favorite time of year and he goes back to Universal Orlando every year for its popular Halloween Horror Nights to see the work of Creative Director Mike Aiello, his friend from their Jaws Ride skipper days. “It’s fun to visit these attractions; I love the attention to detail,” Donahue says. “I don’t get scared in haunted houses; it’s all about the set for me. People will be running and screaming and I’ll be standing there looking around and I’ll hear, ‘Keep moving!’ I’m like wow, that cobweb; look how cool, there’s an arm hanging there! I love walking on to a good movie set; it blows my mind. We’d walk into sets on Inferno, like a giant cathedral in Turkey, and it was like, ‘Wow! You’re in an amazing place you never thought you’d go.’”

New Orleans is one of those amazing places Donahue wants to visit. “New Orleans is on my bucket list,” he says. “I’ve only seen it from pictures. I’d love to visit the streets where the James Bond movie Live and Let Die was filmed. I want to shoot something there. I love jazz and the blues. I’ve seen stuff on the History Channel and the French Quarter can be spooky at times; I love anything ghost and the ghost history in New Orleans sounds amazing. I’m dying to come there.”

Donahue cares deeply about stray animals and is a celebrity co-chair for the Louisiana SPCA’s Howling Success Patron Party & Gala, being held Nov. 11. “It’s so sad seeing these dogs affected by the flooding in Louisiana,” Donahue says. “I was raised with Boston Terriers, Boxers and English Bulldogs. I love dogs and animals. I wish I had tons of money to open farmland and rescue every dog, cat and animal I could. At our base camp in Istanbul for Inferno, there were some homeless dogs; people there are used to these homeless dogs. We’d feed them; they were the sweetest dogs. I wish I could’ve gotten them cleaned up, vetted and brought them home. It’s sad; there are just too many dogs in need.”

300
previous Reagan Sidney: The Grass is Greener
next Leading-Edge Concepts