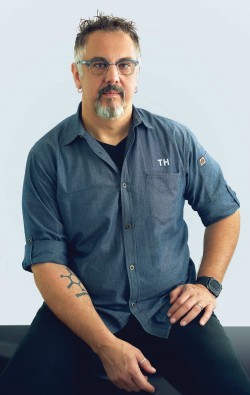 Talking to a school counselor at Oakland Community College in Detroit, Tariq Hanna experienced the first of many fateful moments that have led him to being named New Orleans’ — and one of America’s — best pastry chefs.

“What do you want to do with your life?” the college counselor asked. Hanna had always planned to say, “Architecture,” but his brain flashed back to a dashing English gentleman friend of his father’s, living a glamorous life traveling the world opening Sheraton Hotels & Resorts’ properties. Hanna opened his mouth and out came, “Hotel and restaurant management.”

Fortunately, the school had an excellent program, with Baking 101 being his very first class.

“I absolutely hated it,” Hanna says. “I was a terrible student. I would fall asleep in the middle of classes.” His first culinary salon saved the day. The competition — cakes and display platters preserved in gelatin and aspic all for show — was a turning point and the first time he correlated art and culinary skills. Winning helped too. He took home silver that year and gold the next.

Another destiny moment came, while tasting his first baked good at what was considered the best bakery in Detroit. He was born in Nigeria and grew up in England, so he knew his fresh pastries. He bit in to the éclair, and the sickly sweet flavor made him gag. “Right then and there, with the arrogance of a 20 year-old, I said, ‘I can do better than this.’”

He wasn’t patient though. In the pre-internet era, armed with a culinary school foundation, he embellished his way through interviews, telling chefs exactly what they wanted to hear and teaching himself as he went. He gave his friends fake names and fake scripts to share if they were called as references. When asked “Do you do wedding cakes?” his easy reply was, “I don’t even get out of bed unless I have a wedding cake to make!”

“To me, it was just what I had to do,” he says. “What? Was I going to sit around in the background and wait for the opportunity? Failure was never an option, and I would never be the best unless I took every opportunity by the balls!”

He hasn’t waited since. He has plowed his way in to and through every job and project. And garnered awards and attention through it all: his Detroit pastry and catering shop; the failing restaurant he brought from two to four stars in two months; his position as the city’s first casino pastry chef at MotorCity Casino; and multiple TV appearances on the Food Network and TLC.

Something even better beckoned. He was smitten after his first New Orleans visit — enough to get his Detroit girlfriend to plan their wedding here and more than enough to join the post-Katrina renaissance a year later.

Fate followed him from the blustery North to the swampy South. When introduced to culinary up-and-comer Joel Dondis, he realized Dondis’ sister had been his wedding photographer. Not only that, but while Hanna had been envisioning a project called Sel et Sucre, Dondis had already incorporated the now regionally renowned Sucré.

In the nine years since, the duo has opened three confection boutiques: one on Magazine Street; another in Metairie; and, finally, with the recent opening of the French Quarter location, there’s been a chance for Hanna to open a restaurant above the sweet shop and go back to his other passion of savory foods.

His customers have come to expect the best from him and from Sucre, he says, and he aims to deliver. “The guests are my life blood,” he says. “They’re what keep us going and keep us inspired.”

If meteoric growth is any indication, the outlook is good for business. For the first time in a long time, he says, leadership is tightly in sync with the team core of managers and all the employees.

“We have something really fantastic to build on,” he says. “We’re going to focus awhile on solidifying ourselves and creating a launch pad for Sucré to redefine the pastry landscape again in New Orleans and beyond.” shopsucre.com