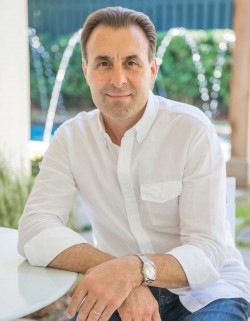 Born and raised in St. Bernard Parish, Anthony Barreca is a first-generation Italian-American whose father emigrated from Italy in 1958. Barreca was no stranger to hard work, putting time in at his father’s tile, marble and stone company at an early age every other weekend and during the summer while he was still in school. After graduating from Holy Cross, Barreca’s father wanted him to attend college, to give him the same opportunities as his siblings. “I came home one day after I had finished the second semester [at Loyola] and told my parents I wasn’t interested in going back.” Barreca says. Apparently, he made the right move.

While Barreca returned to work at his father’s business in the 1990s, he also made some rather lucrative investments in the local real estate market. “The crazy thing about it is, during the four or five years I would have devoted to college, if I wouldn’t have decided to go into business for myself and purchase real estate, I would have missed a very important window of investing,” Barreca admits. During the oil bust at the time, Barreca was able to purchase a lot of properties in foreclosure creating just the financial boost he needed to succeed. “I started my business and started investing in real estate, and now, 26 years later, I have not looked back and have no regrets,” he adds.

From working in his father’s business to owning his own tile, marble and stone company, Barreca had already made great strides before the catastrophic levee failures in 2005. Amid city-wide devastation and adversity, he was able to turn the tide to his favor. “We were working in people’s homes, and helping them rebuild, and the homeowners were desperate to find people to do work other than tile and marble,” Barreca says. Due to his other real estate investments, Barreca already had a network of subcontractors who would renovate the properties he purchased to ready them for lease. “We started taking on the whole project instead of referring other contractors to do the work,” Barreca says. Rising from the flood waters, Barreca Tile & Marble was able to expand into Barreca Contractors.

Although he is not averse to commercial contracts, what Barreca enjoys most is working in the residential market. “Everybody’s got their niche and, for me, renovating residential homes is within my comfort zone. It’s what I really like to do,” he says. He’s renovated kitchens and bathrooms in homes all over the Greater New Orleans Area and there’s no greater enjoyment for him than working closely with each homeowner to ensure they are pleased with the results. “I like being able to help people … help them make their dreams come to life.”

While his work is what drives him, Barreca does take time out to enjoy the finer things in life with his wife Shelley and 12-year-old daughter Devron who attends the Academy of the Sacred Heart. One of their favorite spots in the city is Cafe Amelie in the French Quarter. “Inside the courtyard, you would think you were at a beautiful cafe in Paris or Italy,” Barreca says. Immensely satisfied by his work and family, Barreca admits his inextinguishable adoration for New Orleans. “I don’t think I could do what I do anywhere else in the country. This city is really something else.” barrecagroup.com