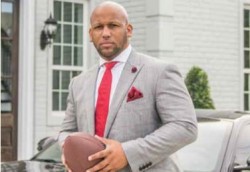 Lawyers are so busy that some joke their only hobby is drinking coffee. That’s why it’s even more surprising to hear that The King Firm attorney Justin Reese juggles not one, not two, but three careers, including work as a sports agent and as a corporate lobbyist for AT&T.

While personal injury attorney is the primary focus for his energy, his workday ends at the same time that athletes are wrapping up workouts and filmstrips, so Reese stays on the phone well into the evening.

“I take off the lawyer hat at around 6 o’clock, and that’s when I put on my agent hat,” he says. “I start reaching out to student athletes and their families — young men coming out of college who I’m trying to recruit. A lot of responsibility is put on these guys; the amount of the money involved … a lot of these guys aren’t truly equipped to handle that. Their friends are graduating, making $40,000 and they’re making a lot more … if they’re really lucky, they’re making millions. I know I can’t save the world, but if I can help a few of these guys transition, it’s good in my eyes.”

Reese counts among his clients running back Robert Kelly of the Washington Redskins, as well as defensive lineman Julien Obioha of the New York Jets. He’s proud they’re both New Orleans products; Kelly attended O.P. Walker and Tulane University, and Obioha went to Texas A&M from Brother Martin. Former Saints player Jabari Greer and other greats are on the roster for Summit Sports Management, the company with which Reese is a certified contract advisor.

Reese, a football player at St. Augustine and Morehouse College, wasn’t recruited by the NFL but feels like he learned enough of the negatives and positives of several friends’ experiences that he knows what it takes to move his clients to the next level.

None of this knowledge explains how he keeps all three jobs going at the same time.

“Look I am busy, without question, but I find ways to make it work,” he says. When he is lobbying during legislative sessions, he spends all the time in between researching, checking email and making phone calls for his law clients. People tell him he’s crazy to do so much, but he says, “It’s good to get around there and show your face, build relationships. That’s how things happen.”

Efficiency and amazing support from his mentors and his staff are the secret to keeping his head above water, he says. That and a decent night’s sleep and an essential morning workout. A lawyer who skips that, he says, is going to have it catch up with him. Not just stress but, “In this business, a lot of deals and negotiations are done over lunch. And I don’t mean lunch at Whole Foods.”

Growing up, Reese was actually against being a lawyer, as his father — now a judge — was a lawyer. He thought he might be a doctor, but advanced science classes were enough to make law look like a better fit. After finishing his major, he spent his last semester across the street at Spelman College, cross-registered for drama classes. He feels it’s been a huge boost for his skills as an attorney — both with presentation and communication skills, as well as with improving his performance in the courtroom.

When it comes to fighting in court, one of his biggest strengths is his confidence and belief in his case.

But what sets him apart, he says, is preparation. “Preparation beats out everything else.”

Part of preparation includes teaching his clients and keeping them informed through every step of their case. “I like to educate them on the process; talk to them about how everything works; and make the practice more real,” he says. “I think that’s how I get referrals.”

And so far, that formula is working very well for him at King Law Firm. “It’s just been phenomenal,” he says. “I started working with The King Firm early this year. It’s probably the best decision I’ve ever made. We’re doing so well, and I am so excited about where this train is headed and what I see on the horizon for this group.”
The King Firm
2912 Canal St., Second Floor
New Orleans, LA 70119
(504) 909-5464
kinginjuryfirm.com

1.34K
previous Turning Challenges into Opportunities
next An Election to Remember